The 2nd Protects the other 26 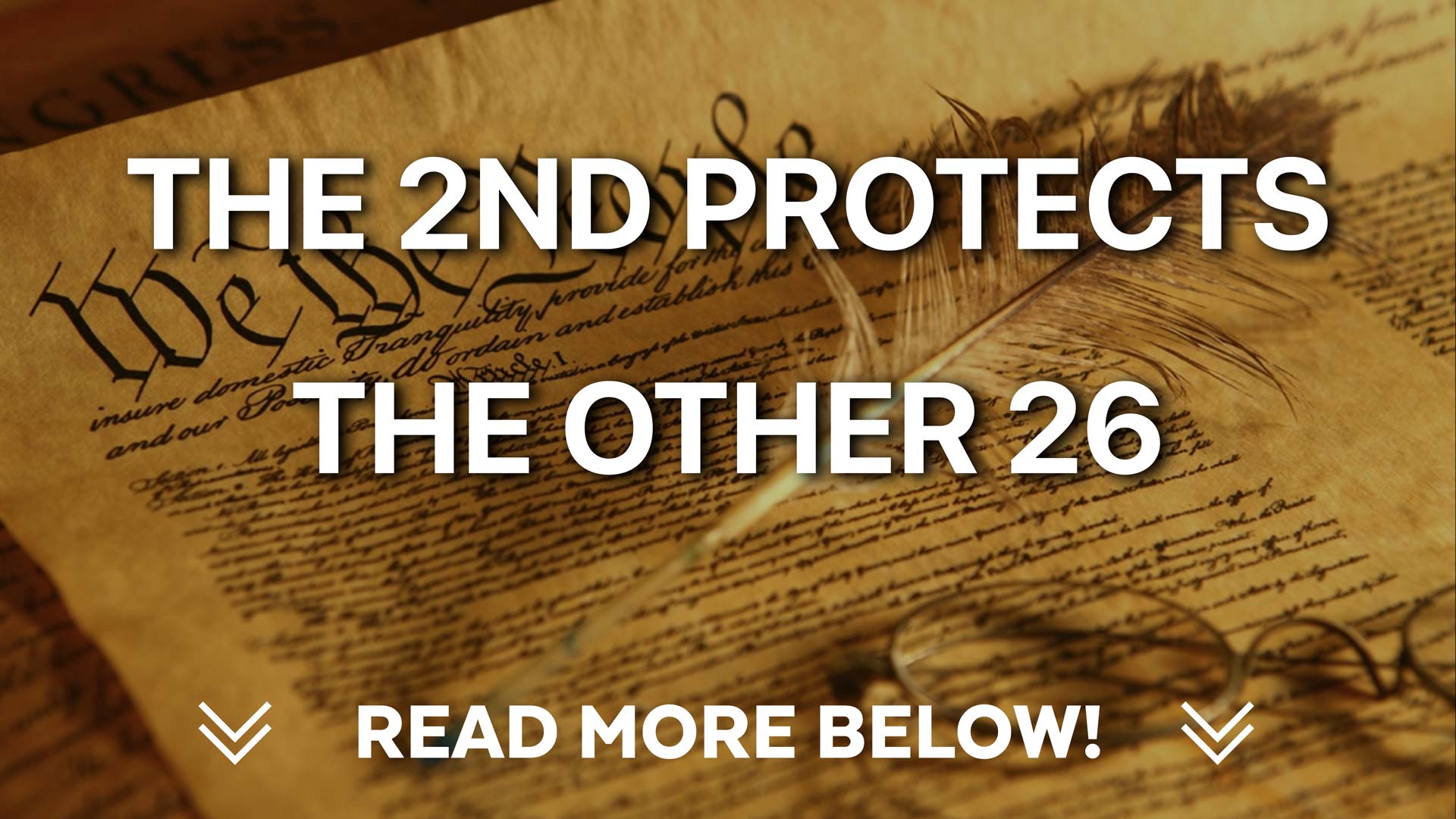 Hey folks, I want to briefly talk to you about the Second Amendment. Now, I know some of you might be thinking, “why are you talking about this? I’m not a gun guy.” And maybe you’re not, but that doesn’t mean you shouldn’t know the importance of the Second Amendment and the rights it protects.

You see, the Second Amendment is more than just the right to own a gun. It’s about the right to protect ourselves and our families, the right to defend our homes and our communities, and the right to resist tyranny. And that’s something that the founders of this country understood very well.

As James Madison, the fourth President of the United States and one of the authors of the Constitution, said, “A well-regulated Militia, being necessary to the security of a free State, the right of the people to keep and bear Arms, shall not be infringed.”

And George Washington, the first President of the United States, said, “A free people ought not only to be armed but disciplined; to which end a uniform and well-digested plan is requisite; and their safety and interest require that they should promote such manufactories as tend to render them independent of others for essential, particularly military, supplies.”

These quotes show that the founders believed that the right to bear arms was essential to the security and freedom of the country. They understood that a well-armed and well-trained population could resist tyranny and protect their rights. And that’s something that’s just as true today as it was back then.

If you’re not aware, the Biden Administration and the Bureau of Alcohol, Tobacco, Firearms, and Explosives (ATF) have recently made a move to strip millions of law-abiding citizens of their Second Amendment rights. Using the power of executive action, they have decided to make owning certain items, such as a wrist brace that attaches to an AR pistol, a felony. And the punishment for this “crime”? $10,000 in fines and 10 years in jail.

Now, you might be thinking, “But I bought mine before this new law was put in place!” Unfortunately, it doesn’t matter. The new law is retroactive, meaning that even if you owned it before, you’re now considered a felon. The only way to avoid prosecution is to pay a $200 fee, fill out some forms, and be “grandfathered” in.

But what about those who aren’t aware of the new law? What about those who unknowingly get “caught” with one of these items? They’ll be facing the same penalties as criminals. And the ATF has the audacity to say that it’s our duty to know the laws. But how can we be expected to keep up with every single change made by the government?

It’s clear that the ATF’s move is not about keeping us safe. It’s about taking away our rights. Studies have shown time and time again that law-abiding gun owners make up a minuscule amount of gun-related crimes. So why is the government focusing on punishing us instead of cracking down on the real criminals?

Let us not forget the importance of the Second Amendment and the rights it protects. We must stand together and defend our rights against any attempts to strip them away.

Now, I know there are some people out there who would like to take away our rights under the Second Amendment. They’ll tell you that we don’t need guns, that they’re too dangerous, or that criminals only use them. But that’s just not true.

Law-abiding citizens use guns millions of times yearly to defend themselves and their families. They’re used by hunters and sportsmen to pursue their hobbies. And they’re used by collectors and enthusiasts to preserve our history and our heritage.

So, the next time someone tries to tell you that the Second Amendment is outdated or unnecessary, just remember the words of the founders and the importance they placed on the right to bear arms. And remember that our rights, including the Second Amendment, are worth fighting for. The 2nd amendment protects our other 26. It’s that simple, folks.

For the anti-2nd amendment folks, if your life is threatened, you do what?

You pick up the phone and hope a person with a gun gets there in time to save you…wake up.

Save yourself, and protect your rights and your families’ rights, while we still can.

If the 2nd amendment falls, so does our country.