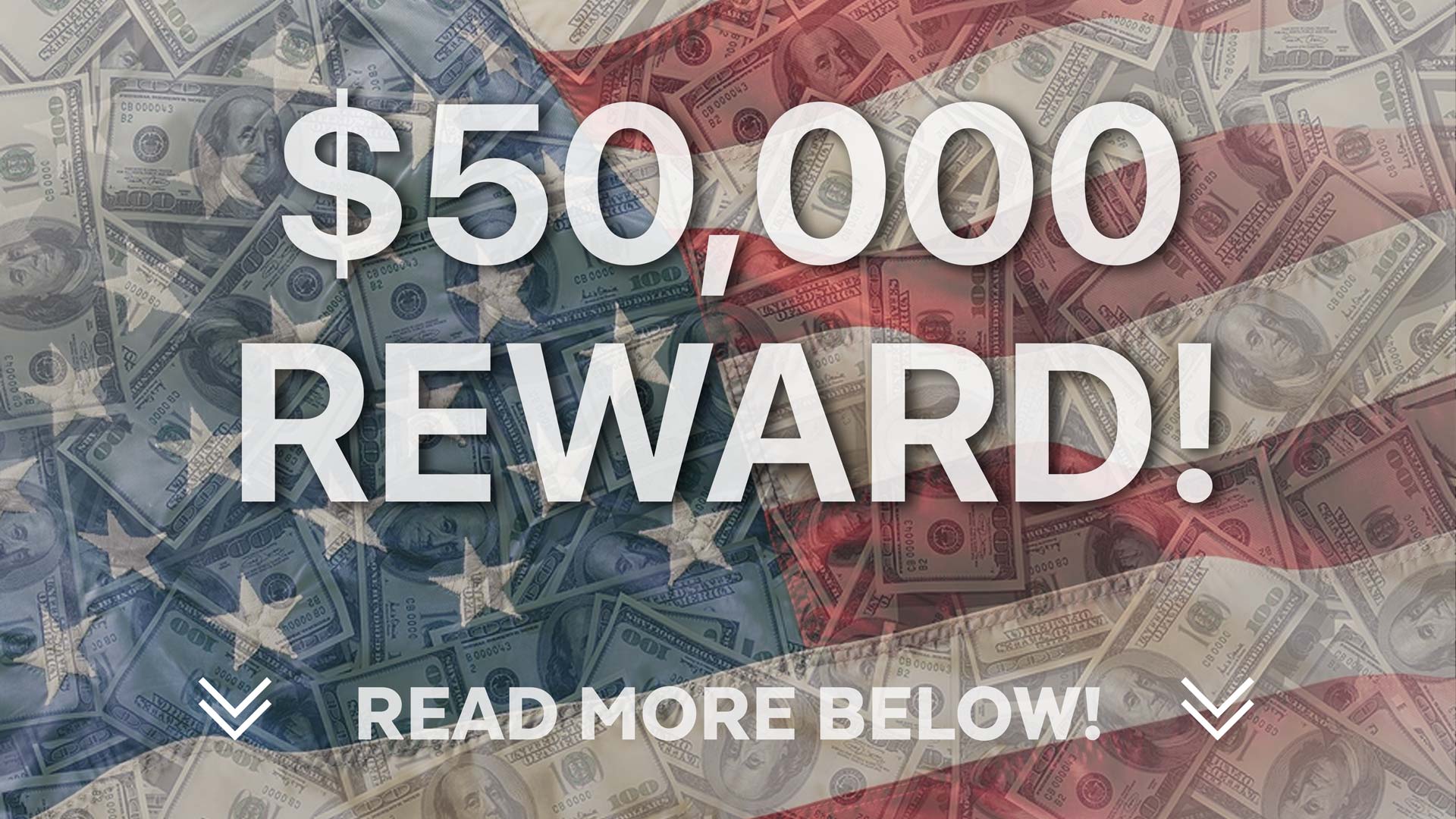 $50,000 reward to anyone who can prove us wrong. The details are below.

But before we discuss the reward, let’s give you some background.

It’s really disheartening when I hear people say the entire system is corrupt, that it’s hopeless, that it’s going to come to civil war.

It’s the lack of knowledge that has been kept from these people that makes them think this way.

Schools barely touch on civics and the constitution nowadays in any meaningful way other than to tell us it’s an old, outdated document invented by racists, etc.

Nothing could be further from the truth.

What they don’t want you to know is what it says, what it means, what it grants you, and who is supposed to follow who’s commands.

They don’t want you to know your rights.

They don’t want you to know that these rights came to us from God and the constitution.

Each state has its own constitution as well. Here is Nevada’s. Get familiar with it.

Notice right away it says:

We the people of the State of Nevada Grateful to Almighty God for our freedom in order to secure its blessings, insure domestic tranquility, and form a more perfect Government, do establish this Constitution.

Engrave in your heart and mind the next truth:

Purpose of government; paramount allegiance to United States.  All political power is inherent in the people[.] Government is instituted for the protection, security and benefit of the people; and they have the right to alter or reform the same whenever the public good may require it.

Did you catch that?

We have the right to alter or reform the same whenever the public good may require it.

Notice it doesn’t say in 2 or 4 years? We can alter or reform our government whenever the public good requires it!

That’s today, my friends. Today we will start to reform our government.

The big secret they keep from us is they work for us. They are our public servants.

The purpose of government is to ensure life, liberty, and the pursuit of happiness.

Now we see they are actively crushing our life, liberty, and pursuit of happiness.

You can’t have a protector who beats you. This is not supposed to be an abusive marriage.

This is a very clear-cut and dry relationship. They work for us. We tell them what to do.

If they don’t do what We The People want, we fire them. We don’t have to wait until the next election!

Now let’s stop here and just focus on our elections.

The election system I believe is how they have destroyed our rights and liberties on the surface. Knowing what we just discussed shows, we can end this madness anytime we want.

So let’s start here with our elections.

The Nevada Constitution clearly states every voter’s right as follows:

Accurately records the voter’s preference in the selection of candidates.

If the constitution guarantees every voter’s preference is to be accurate, surely we have an unconstitutional election system, and it must be reformed.

Let’s start with some facts to back this up.

In the recent 2022 General Election, the Registrar of Voters reported who voted each day. They list the name and contact information of each voter they say voted.

When we called the people the ROV said voted, we quickly saw 15-20% of the so-called voters said they didn’t vote.

As we continue to call over 180,000 of these people, the number of people who say they didn’t vote has risen to over 30%!

Meaning potentially 30% or more of the reported voters the ROV said voted didn’t, meaning someone else voted for them illegally.

Meaning the entire election is as trustworthy as Judas’ kiss to Christ.

We have thoroughly canvassed the voter rolls and found them to be in horrible order.

Meaning 100s of thousands of people shown on the voter rolls shouldn’t be there.

Meaning due to AB321, ballots are mailed to these so-called voters.

Then unscrupulous people pick them up, fill them out and mail them in.

The Registrar of voters fails to do meaningful signature verification, and all these illegal ballots become valid votes.

Again, our elections are about as trustworthy as Wile E. Coyote with a sledgehammer. 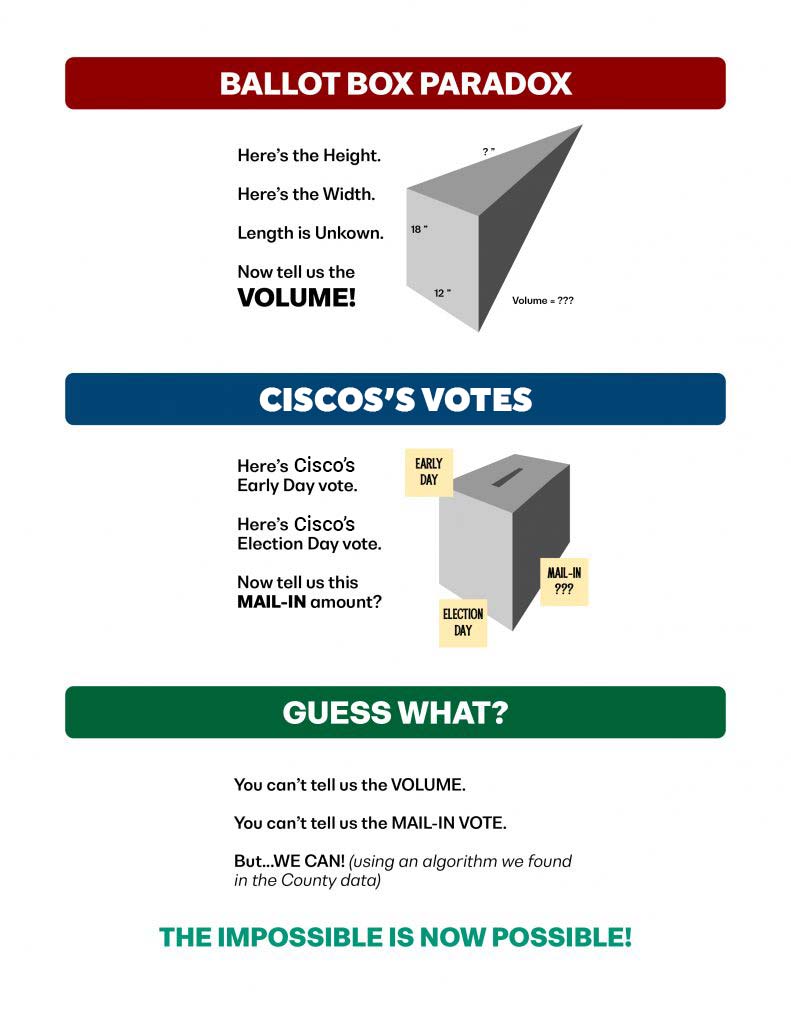 Imagine if you will a box. Now, if I tell you the height and the width but not the length, can you tell me the volume?

This is basic grade school math here. It should be easy to understand.

The answer is an easy NO.

There’s no way to know the volume of the box if you don’t know the length.

Yet this very thing we can do in our elections.

Edward Solomon found the algorithm that is secretly flipping votes in Nevada. They tried to delegitimize him by saying he doesn’t have a degree. So what? Neither do I, but guess what? He and I can tell you the volume every single time. How’s that?

It’s a formula. It’s literally an algorithm running behind the scenes that is flipping our votes.

Let me now give you specifics while being broad enough so I don’t lose people with the math.

The unintended consequence of this algorithm is it allows us to know within 1% certainty the exact percentage of votes across ALL precincts.

Meaning across all precincts, they all show the exact same voting percentage of 63%.

It’s completely fabricated. All the results we’ve been shown are grievously wrong.

Additionally, it allows us to know the exact turnout of voters per precinct without knowing all the variables. Think of the box example I gave you above. Same thing here. We know what can’t be known.

All of these things I pointed to are facts. They are not feelings. These unintended consequences of the algorithm rear its ugly head in these accidental “tells.”

So by simply knowing the formula to the algorithm, we can reverse the effects of the algorithm and what you find is shocking!

Now, knowing the formula as we do that shows the algorithm, it’s now simple to reverse the reported results.

Guess what we found?

Republicans across all of Clark county really won.

It’s been the only County to release the data so far!

A huge thing to remember here is all we’re showing you is the County’s own data. This is not speculation. This is simply their reports we dig into and report back to you on.

So by simply knowing the formula to the algorithm, we can reverse the effects of the algorithm and what you find is shocking!
Just in Clark County, the state-wide Republican races had 174,000 votes stolen from them each.

The red wave came, but through this completely untrustworthy election system we have in Nevada, it was diverted to the Democrats.

I promise you this is the truth.

Just like in Florida, republicans came full-fledged and won almost every single race in their elections. Our elections are far from trustworthy.

While Democrats are taking their bows and giving thank-you speeches to empty rooms and small social followings, we know the truth.

This is a total violation of our rights and liberties. Government and our servants have 100% failed us. We must now reform our government and take back what is ours peacefully.

When we come together, we simply tell them what we want to be changed. If they don’t, we fire them now, not in two years.

Our public servants, if they weren’t aware of this grave injustice to our rights and liberties, are now.

They were served last week to give us a new election and shortly how to reform our election system.

It is completely untrustworthy. Bad actors got in the mix and stole our voices and votes. This can not stand.

Here are two things you can do now.

Send this to every math person you know, look at it yourself, use the formula shown here on the County reported data in Clark county, prove Solomon wrong, win $50,000.

Now when you find out we’re right, you must never be silent again. You must call these public servants out by name and join us in peacefully exercising our God-given rights to take it ALL back!

Fill this form out. It’s your name and email. It takes 20 seconds, and it will tell our servants you’ve had enough, and this crap ends today.

Most truly don’t understand the power we have that came from God and our constitution. Start using it.

It’s time we peacefully remind our servants who they work for. If you and everyone you know join us, this will work faster than you could ever imagine.

We will walk you through this step by step in the coming weeks, but start right now here:

For those that are skeptical about an algorithm flipping votes, you should be. It sounds crazy, right? In tech, we can program devices to do whatever we want, if I made a program to flip votes behind the scenes, the user would never know. Unless it’s someone like Edward Solomon who found the algorithm, the formula to use it, and then tell the world. Now the judge didn’t want to hear about it the last time we showed it, so now, not only do we have the person who found the algorithm, we found the person who created it.

This is now uncontestable. The facts are in the link, the proof is in all these candidates who no one voted for winning, and of course, the proof is in the work of the man who created it and why. Wait until you hear his story.