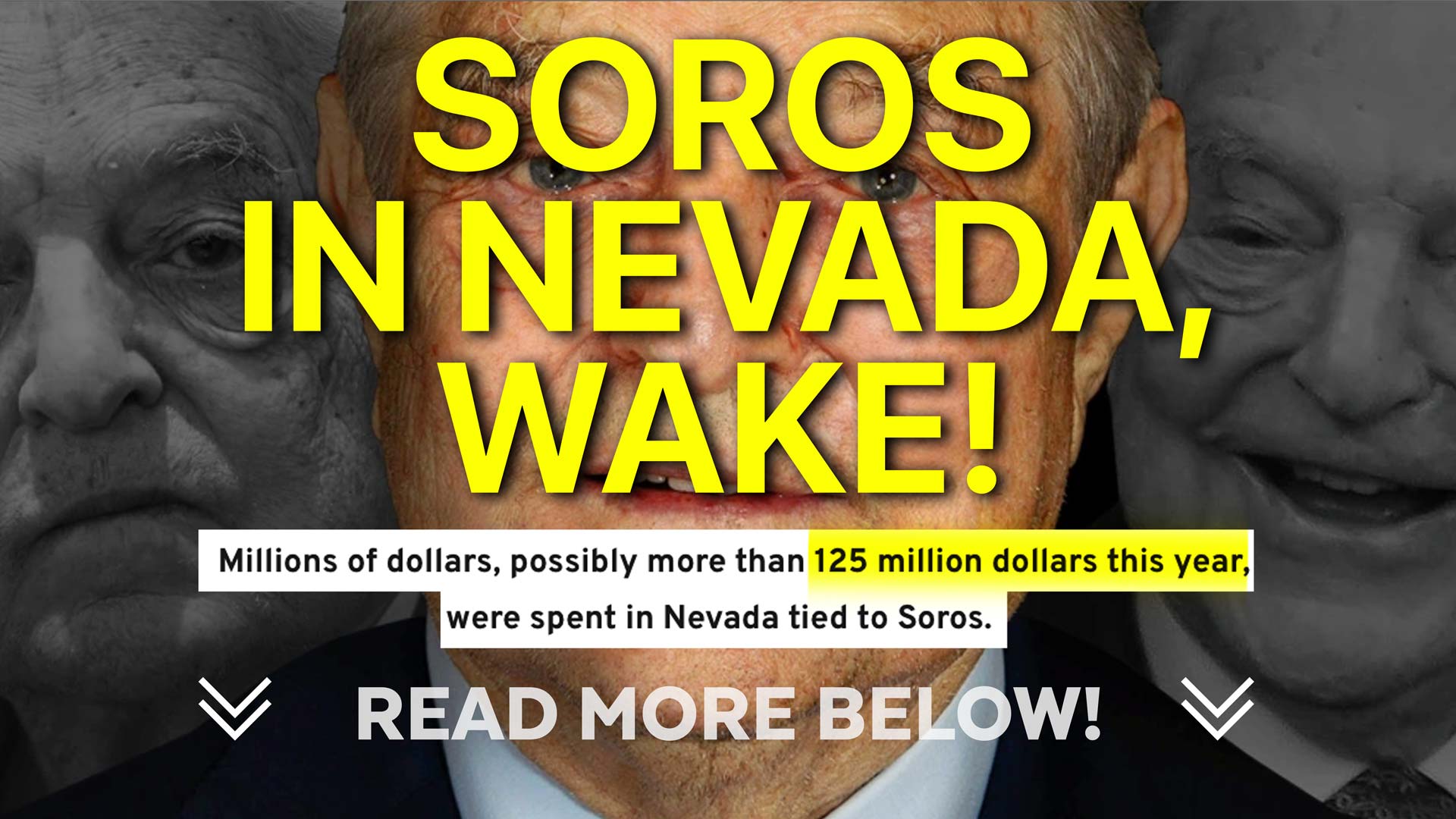 Millions of dollars, possibly more than 125 million dollars this year, were spent in Nevada tied to Soros.

Media darkness, with no mention of it to the public by the media.

This money and ideology influence every level of politics from school board to governor.

Much of this money comes through a true Nazi, a truly bad guy, George Soros, but crickets by the media.

Who is George Soros?

Why do we keep hearing his name?

Dig a bit, and you’ll see his money spent in media, politics, industry, and more.

Most don’t know who he is.

Listen to who he is here, in HIS own words:

People defend him, even Jews.

Did you hear what he said?

This is on 60 minutes, not some obscure program.

Soros literally says as a 14-year-old, he went under the wing of a Nazi to take the property of Jews and send them off to death camps.

As an adult, in that same interview, he has no regrets, no remorse.

Notice, they try to paint me as an antisemite because I expose to you who they are.

We’re over the target.

They try to attack me for somehow perpetuating the Protocols of the Elders of Zion.

Nay, I simply pointed out how these sick people used the protocols to attack Jews and how they took the playbook and changed the attack on Jews to us, and the Nazis were changed to globalists, using the same playbook.

They took this evil doctrine and just flipped the names and went on the attack.

Just know these people accuse us of what they truly are.

So back to Soros.

Here is a list of companies he has ownership in:

Here’s what the Daily Wire has to say about him:

Here is a list of Nevada and other states candidates talking Soros affiliated money:

Here Soros funded groups showed up to our county commission meeting, calling us racists for wanting free and fair elections.

They were allegedly paid $60 per hour to pretend to be from Washoe and care about free and fair elections their benefactor allegedly wants to destroy.

They attack me and you.

Depending on when the Nevada Independent received funds from Caesars Entertainment, Soros, until 2020, was a major stakeholder in the company at 5% or roughly 35 million shares.

Caesar’s donated to Nevada “not so” Independent.

Here we have ANI, ANI does not have transparency like other ballot initiatives, but I was able to find an article that ties them to Soros.

This is the Emerson Collective listed as a supporter of AJP and the NV Independent.

This is an older article, but it shows that they receive money from Soros.

#5 on the Nevada Independents donor list is the American Journalism Project.

When you go to their website and click on “Our Supporters,” you will see the first one is “Knight Foundation.”

Another tie to Soros there.

Know the Nevada Independent is a tiny obscure website no one takes seriously, but know Soros funds those that are taken seriously.

Did you look at his ownership in the big 5 media companies?

I’ll show you again below.

Soros and pals fund the media.

This is how they take the busy person who’s working to pay the bills and feed them propaganda that their too busy to research as truth.

But how do they perpetuate their lies and narratives to We The People?

How do they get so many to believe their lies who, unlike us, are attuned to what’s really happening?

Most media is controlled by 5 corporations:

Here the Nevada Globe shows a taste of what’s happening just in Washoe:

When you see who is behind the curtain, the little old Nazi man pulling all the levers, you’ll see he as a twisted Oz, and his pals are the ones making perception, reality.

Expose the little Nazi man behind the curtain and his pals.

Remember, once you know, you know, they can’t lie enough to change what your ears hear, your eyes see, and your heart knows.

These people are evil. They have corrupted many through ignorance and simply being too busy to do their own research.

The Bible tells us people are destroyed for lack of knowledge.

What will you do with this knowledge?

Remember, too, the folks that are too busy to research this or know what we know are because they are stuck in the hampster wheel of debt these so-called servants put them-us under.

They put us under their boots by printing money into extinction and using the press to blame others for it while they all become rich on our dime.

They use these so-called servants and media to do it to us.

The masses will be destroyed unless they wake up to who and what is doing it to them.

This is a taste. It runs far deeper. If you wake to this, you can wake to it all.

Here are some candidates taking Soros’s money in plain sight.