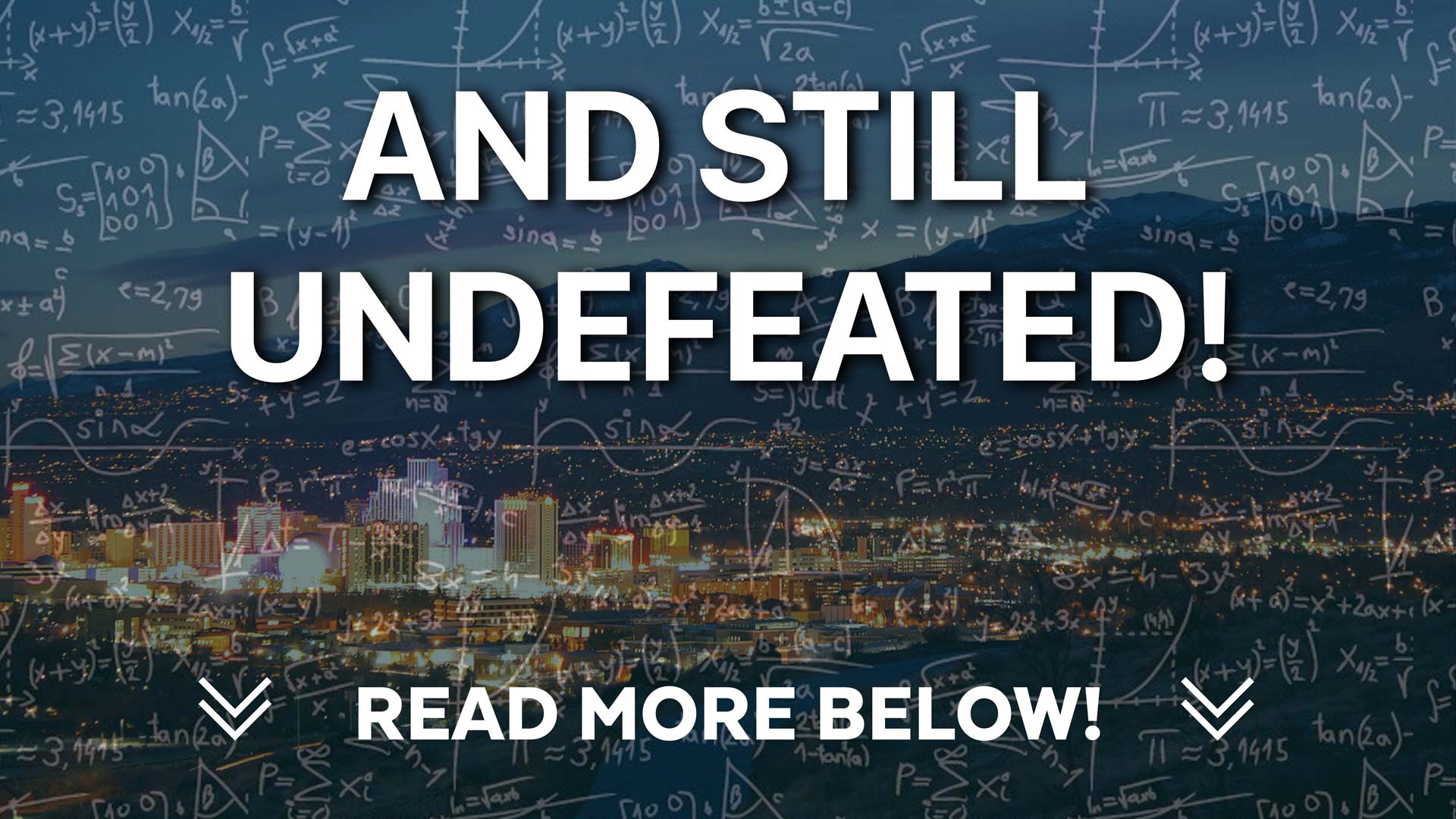 We have the $50,000 and $30,000 challenges in which Edward Solomon shows the math that the challengers simply don’t want to discuss.

Edward clearly shows there is an algorithm flipping votes across the two largest counties in Nevada. I have put up two challenges for anyone to take up, and it’s a simple challenge.

The alpha percentage with only the g and h percentages, with no knowledge of the Omega or Lambda percentages.

What does that mean to a layman who doesn’t understand geometry and algebra?

It’s the box analogy I use that any high school student should be able to answer.

Here’s a box. The height is 12 inches, and the width is 14 inches BUT I’m not going to tell you the length of the box, but YOU must tell me the volume of the box.

Now any high school student or math professional should be able to tell you the answer is unknowable. Meaning without the knowledge of the length, they can NEVER tell us the volume accurately once, let alone thousands of times, and always be right.

The so-called expert challengers have all conceded we’re right as well.

So what do they try to do? They try to never discuss the math because they know they will be proven wrong, so instead, they try to say things like well, because you don’t know who did it or why it’s not important. Or they will say because you know the county data, of course, you can know.

Both are absurd. Yes, we have to know the county data. Why? Because it’s what they certified, it’s how they say who wins. We have to test their data, not read tea leaves.

So knowing the county data, when we remove a variable like the length of a box but yet somehow when we use the formula, we found we can STILL always predict the “volume of the box” or rather the number of mail-in votes in a precinct, in the two largest counties, in Nevada.

As I showed you a quick and easy layman’s test for you in the last post, you too will now become a superhero in predicting every single mail-in vote total for democrats in the Trump-Biden race. It’s impossible, yet we-you can do it with our simple formula.

The more complicated formula in the Solomon papers will get you to one vote or so of predicting the total. Our quick and dirty formula for 4th graders gets you usually within 2 to 30 votes or so of the reported total. It’s just a quick and dirty way to show we’re right. Why won’t the math challengers challenge it?

Why? Because the math doesn’t lie, and that’s why they don’t want to address it.

Instead, they try to attack the messenger, not the message. They try to call Solomon and others names and discredit his character versus attacking his message.

They will make up things like he’s using statistics or assuming things, which they hope you’re dumb enough to believe and move along.

This is a very simple test for you to see who’s telling the truth. Simply follow the math that I showed you in this post here and see for yourself. Additionally, watch the video here. You’ll see this has nothing to do with assumptions or statistics. It’s simple math.

Once we get past the challenger’s deflections and B.S. and get back to the simple math challenge, they all either concede we’re right or call us names and go away. 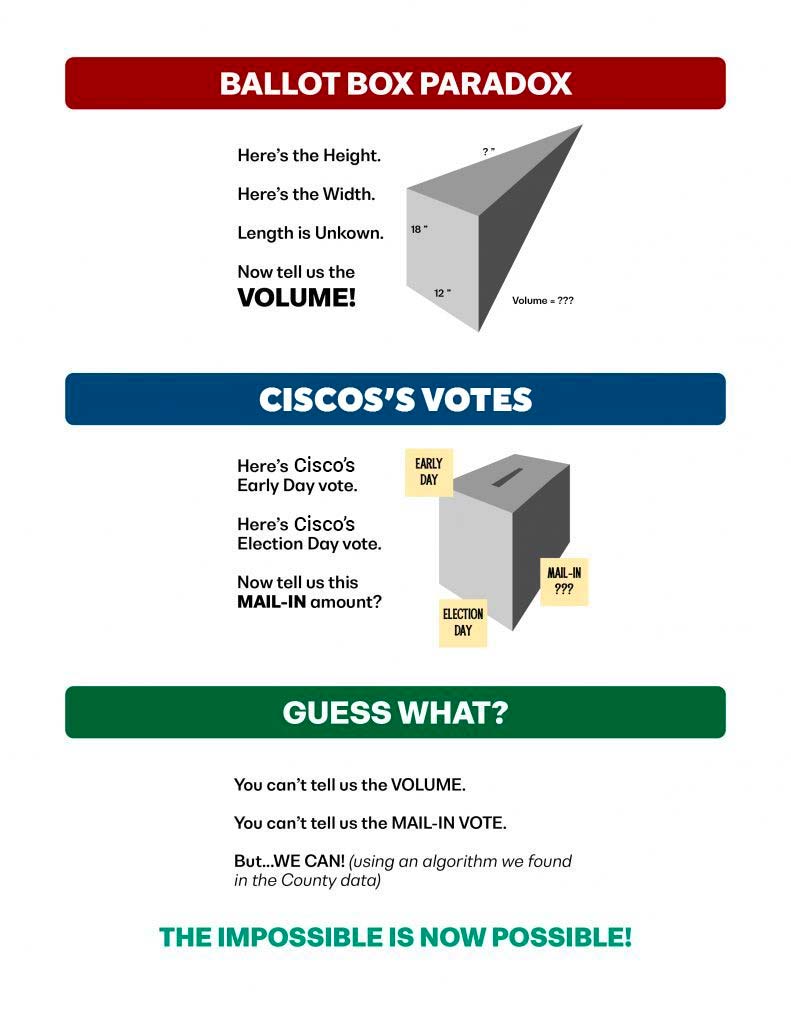 There are many issues with our elections. They are the furthest from trustworthy but don’t believe me, the “election denier” listen to these “election deniers” as well and see if you notice something here.

These are all Democrats saying the elections are rigged. The machines can’t be trusted. Their races were stolen, etc.

Know both parties do it. This isn’t a right vs. left thing. It’s a “them against us thing.”

It’s simple, by stealing our elections and putting “their” people in charge of our country’s levers, they can exploit the crap out of the world.

Look at the wealth of these people since they took office. Look at the lack of support these people have, yet they still keep winning. They don’t want you to know all of our country’s problems are due to stolen elections.

Look at what the CIA and others have done in so many other countries when it comes to stealing elections and installing their people. Is it absurd to think others would do the same with the most powerful country in the history of our world, with the largest money-printing machine?

I could go on for pages on this, but let’s wrap it up for now. They are stealing our elections. For us to win with who we actually vote for, if it’s a county-wide race, we’ll need around 70% of the vote to keep them from stealing it. That’s another long story I’ll cover in another letter to you.

Through the press, courts, and every level of political office, they try to control the narrative and demonize we who speak the truth. It’s simple how we fix it.

We stop playing their game and call it out as rigged. If you played a game and your opponent cheated you every game, would you continue to play? Or would you call them out for everyone to see the cheat they are?

That’s what we have to do. All these people in political office need to know we know they’re rigging it, and we must all stand in unity and demand free and fair elections. Anyone in leadership who is against the proposal below is for fraudulent elections.

Any public servant who is against this, look into their past actions, votes, and finances, and you’ll probably see why they are against it.

That’s it in a nutshell. It would fix 95% of the issues and save us millions of dollars. We would be able to trust our elections. By decentralizing the counting process across the entire county, it makes it far more difficult to cheat, and all the free workers, being residents of the precinct or county, takes the power back and give it to the people.

The math is still undefeated, and you know what else?

The majority of the country knows our elections are rigged, regardless of what the press propagandizes us with.

Call it out, and support the petitions to SCOTUS that are flooding the system. Between God and us, we can peacefully take it all back. Apathy is gross and will never work. It’s now or never, folks.

Remember, folks, if we’re crazy, why won’t they publicly debate us? It’s simple. The truth doesn’t mind being questioned, but a lie doesn’t want to be challenged.

If you missed this nail in the coffin proof our elections are rigged, here it is again for you:

In the next week, we’ll walk you through the 2022 proof as well as individual races.

We have the proof. Now we just need you to peacefully spread the word and say enough.