RGJ covering for the County, again? 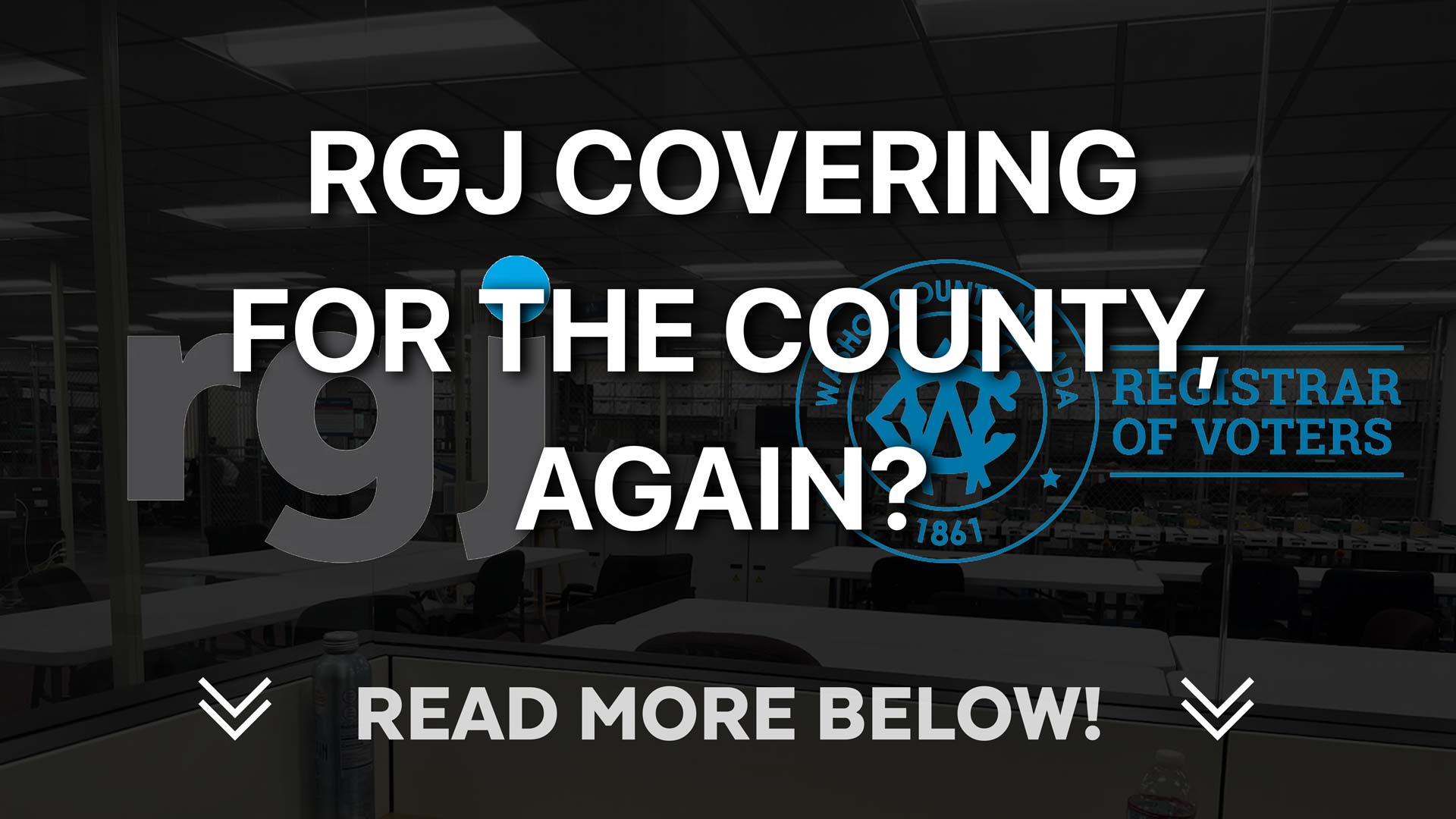 Like a hand to a glove, Washoe County and the RGJ seem to be a perfect fit.

Seems no matter what we show, Washoe runs to the press for cover and spin.

Are we? You decide.

Before we start on the newest propaganda piece, let’s take a tiny walk back through the last year in which, piece after piece, these two always say we’re wrong. Yet never follow up with our rebuttals.

We sent supporting documentation to Robison and the county, but he-they never touched it and never reported on our rebuttal showing we’re right.

We additionally covered it again here, showing we’re right, and guess what the County or RGJ said about nothing….

Notice in that same article, we show how chummy Bethany and Mark are? Does that seem like objective reporting or simply running cover for the county? Read their emails again, and you decide.

In this Robison, Drysdale attack piece, they try to say we’re wrong about all these extra ballots floating around everywhere. Yet the printer acknowledges the incorrect ballots are in millions of their trays, and the acting ROV Rodriguez is caught in an email sharing how they have plenty of extra ballots and so much more. You can read their own words in our rebuttal, which again is never covered by Washoe or the RGJ.

Here’s our rebuttal exposing their own emails, verifying our concerns, yet again, no coverage by the RGJ, who appears to be covering up these election issues via going silent.

Here you can see our email exchange and my answers to their ridiculous allegations.

Here’s Drysdale and Robison’s newest propaganda piece saying we’re now wrong again. This time about people voting who did NOT vote based on the County ROV’s own data on their own website shows. Per the NRS, the ROV must show who votes in each election. They put the list right on their website. Many have phone numbers. So we called these so-called voters, and guess what 30-50% said they didn’t vote. Here Robison and Drysdale say we just got it wrong again….

You’re reading our rebuttal now. $100 bucks they don’t cover what’s in this letter to you as well….

Ok, so let’s break this down a bit, as it can get complicated, but we’ll do our best to make it as simple as possible.

But we’re to trust their data and claims that we’re wrong…..

Here the ROV shows there are 15,718 challenged ballots. 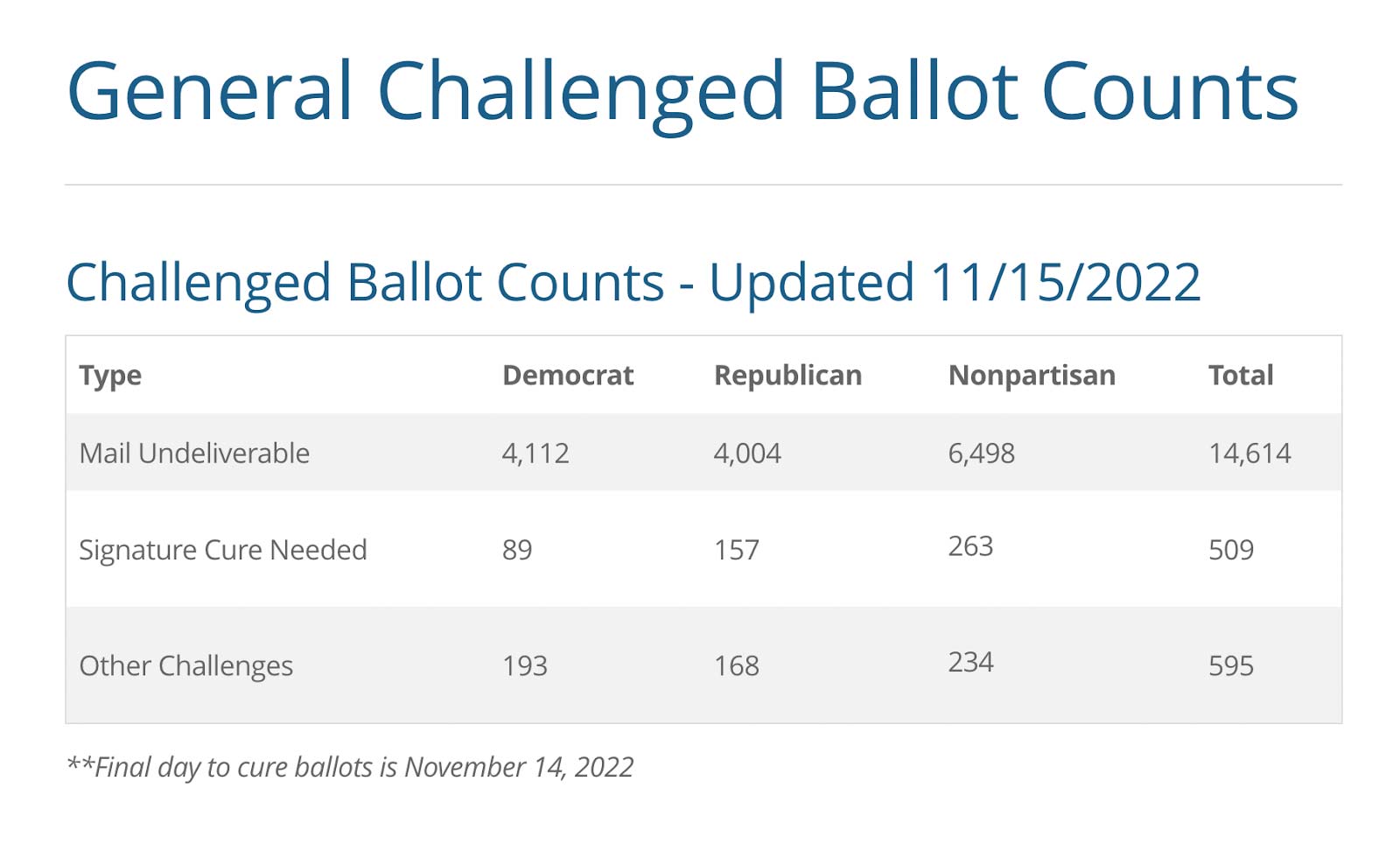 The ROV is stating in this article that these 15,718 challenged ballots were never cast as votes….

Even if you just run the 15,718 against the so-called total voters in Washoe County of their reported 304,222, that is 5% of people receiving ballots who shouldn’t. That they supposedly “caught” in time.

Full stop there. I thought our voter rolls were pristine and had no issues within them, according to the other propaganda hit piece they did on some of our team here:

The 42,000 voter issues we gave to the County are wrong too?

Of course not, but they hope you’re dumb enough to believe them.

Why is any of these important?

Forget about all the money sending out all these ballots costs. Forget about what every 1st world country and Carter Baker told us about how mass mail-out ballots are the easiest and biggest source of election fraud. Let’s stick to something very, very simple.

You can’t trust anything the ROV reports. Period.

Because we can never ever ever see an actual ballot to confirm what the ROV cast and counted it properly or that the person who cast it was eligible to do so.

You can gain access to every envelope the voter filled out. You‘ll see their signature, their name, address, party affiliation, precinct number, and more, but never the ballot.

Why? What’s on the ballot? Why is it so important we can never see it?

Well, it’s simply an anonymous ballot. There is no identification whatsoever as to who cast the ballot.

Now let that sink in.

I can see all your personal information, including your signature on the envelope but never your anonymous ballot.

We can never audit the ballots against what the ROV reports.

The ROV reports, at a precinct level, how many voters from each party voted and for who, but we can never look at the anonymous ballots to confirm the ROV counted the ballots properly.

Hell, these people can’t even spell precinct correctly, and we’re supposed to believe they can add and subtract properly. That they “carry the one” properly etc.?

It’s ridiculous and a complete way to cover up malfeasance or just incompetence. You’ll never know, and you’ll never get to see the anonymous ballots to “fact-check” them!

It allows them to always say we’re wrong because they’ll just say whatever they want, and we’re not allowed to verify, just to trust them.

A great source of proof is the following articles from our friends you all need to read:

“You can track ballots all you want, but the Leftists and RINOs have an inventory for every ballot a GOP operative finds.  Leftists have as many ballots as they need – they operate at an industrial scale”

The second fallacy is “those who count the votes win the elections.”

The correct statement is:  those who control election rolls determine who wins.

We get into this more deeply at www.Omega4America.com.

MUST READ – Our Most Important Report of the Midterm: Election Fraud, It’s Voter Roll Manipulation – Not Ballot Gathering! (thegatewaypundit.com)

Now for all of you dozens of RGJ readers lol, here’s some truth the RGJ will never cover as well:

In Brazil, they are exposing the massive election theft, yet there is NO mainstream media coverage.

While millions march in protest of the stolen elections, the military is taking over, and people are filing criminal charges against the judges in military court. Is it crazy to think they steal elections in the US as well?

Cookie cutter, copy, paste election rigging happens across the globe, it happened here, and it happened in Brazil. Millions march in support of the true President Bolsanaro, yet we see zero opposition from the side that “supposedly won” marching against the Balsanoro voters.

Millions show up for Trump, but none for Biden….Sound familiar?
Crazier yet, Biden and the MSM all say Balsanaro lost, and the criminal Lula won…..again, sound familiar….

Read about some of it here:

Again, the elephant in the room is you can never trust anything the ROV says because you can never see the actual anonymous ballots, but you can see the envelopes with all the voter’s information on them.

To anyone with an open mind who reads all the propaganda pieces against us, then reads our rebuttals on Operation Sunlight that the media and Washoe never address, it clearly shows they have zero interest in the truth, just in trying to convenience you that “everything is fine…”

They hope you see their one-sided attacks on us. With no full rebuttal from us. Then hope you accept their attack as truth that “Beadles and team are wrong again,”… but we’re not.

Here’s simple proof, they say the 4 people in the affidavits we sent to the Supreme Court were not actually cast votes. They say they were challenged, then not counted.

So since we can’t look at the ballots or what ballots were even counted, we just have to “trust them” that these ballots weren’t counted, let’s say for the sake of argument they are right.

Remember, it’s not like we can go back and check the votes and data they show or showed with any real meaning.

So what will they say here with another voter WHO DID NOT VOTE but the ROV says did?

This is just one of the thousands we haven’t publicly shared, so there’s little chance they can say they challenged it after we post it here now.

Again, this voter did not VOTE, but the ROV shows they did. 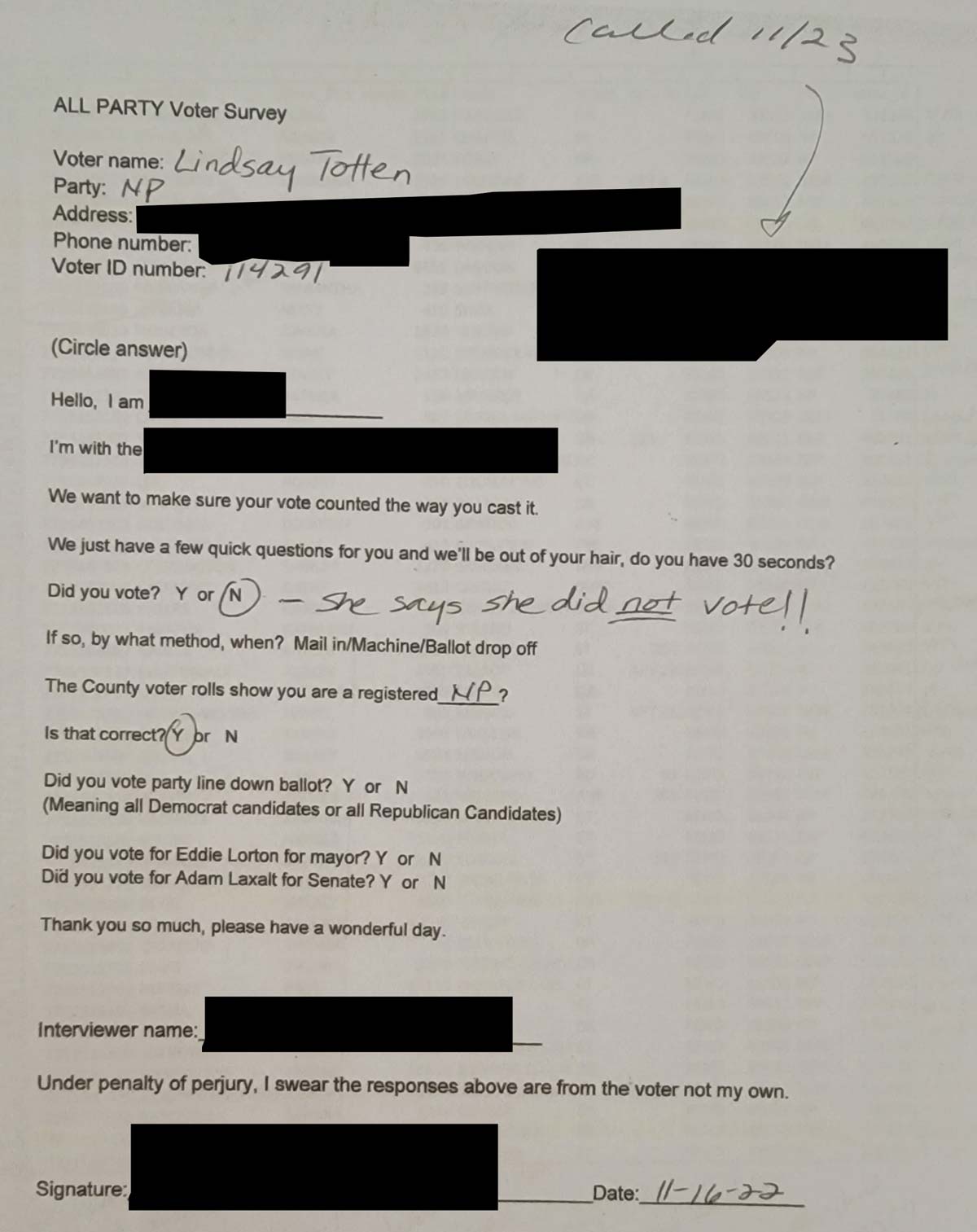 We can do this all day long, tit for tat. They say we’re wrong. We’ll prove we’re right.

Now plain as day, you can see from their own report they say Lindsay voted, but SHE did NOT! 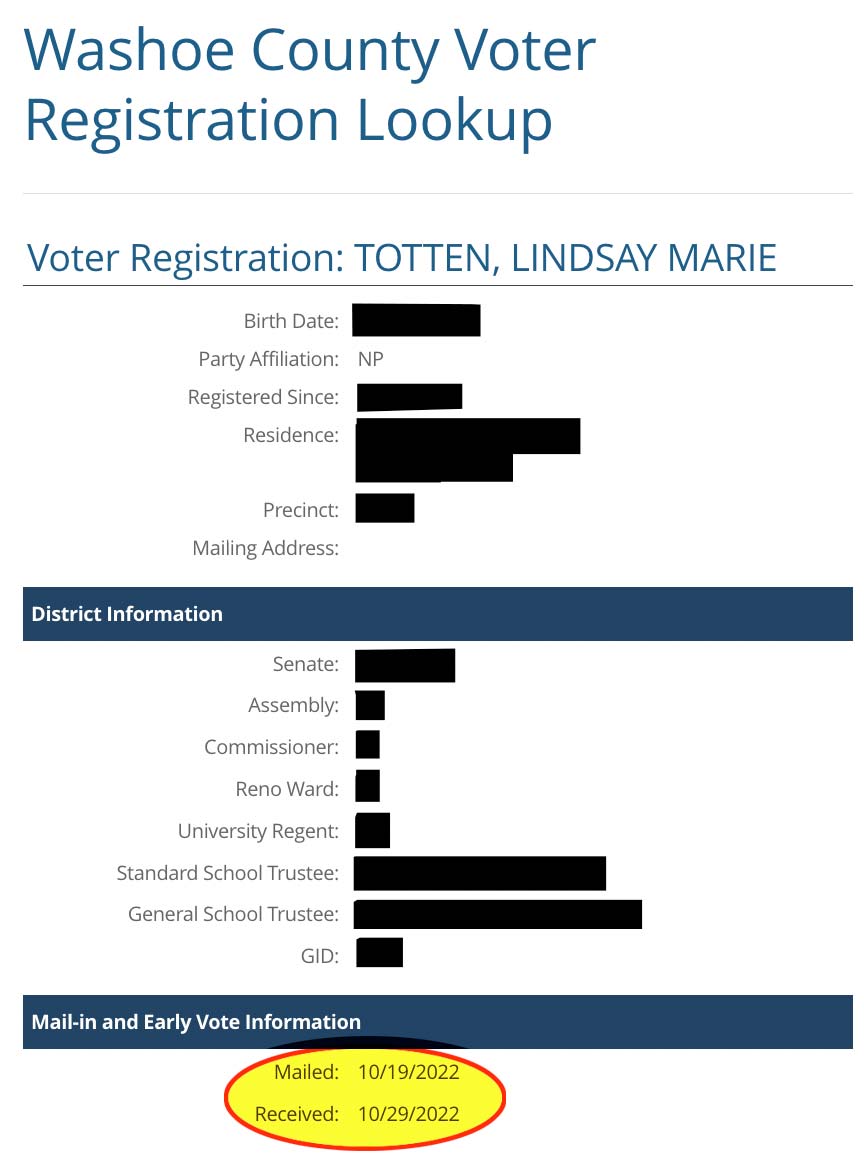 So rather than sending the affidavits for thousands of voters who didn’t vote so all can see them, to where they could change the reports, and say we’re wrong, see for yourself right here, right now!

Here is proof under penalty of perjury, they did NOT!

What will these two chummy people say now?

We know they won’t respond to me-us, but let’s see if they address this in their propaganda pieces next.

Additionally, Robison and Washoe try to completely downplay the affidavits sent to the Supreme Court.

They make it sound like we only found four issues. Hardly, we found thousands like this. We didn’t need to show them all the fake votes. We can do that later. If the right to suffrage is impeded by even one vote, it’s unconstitutional. Again, we can show thousands. What they additionally fail to cover is what do the other 6 affidavits show.

This is FAR from a trustworthy election, and anyone who reads the affidavits will see that as well.

As Reagan told us, Facts Are Stubborn Things.

Additionally, we’ve requested data from the ROV, Data they must have had on hand to certify the election. Why must we wait until on or before 12/30? What are they doing to the data? It should be all settled, right? It should be a simple drag from their drive and drop into our email, right? Why isn’t it? 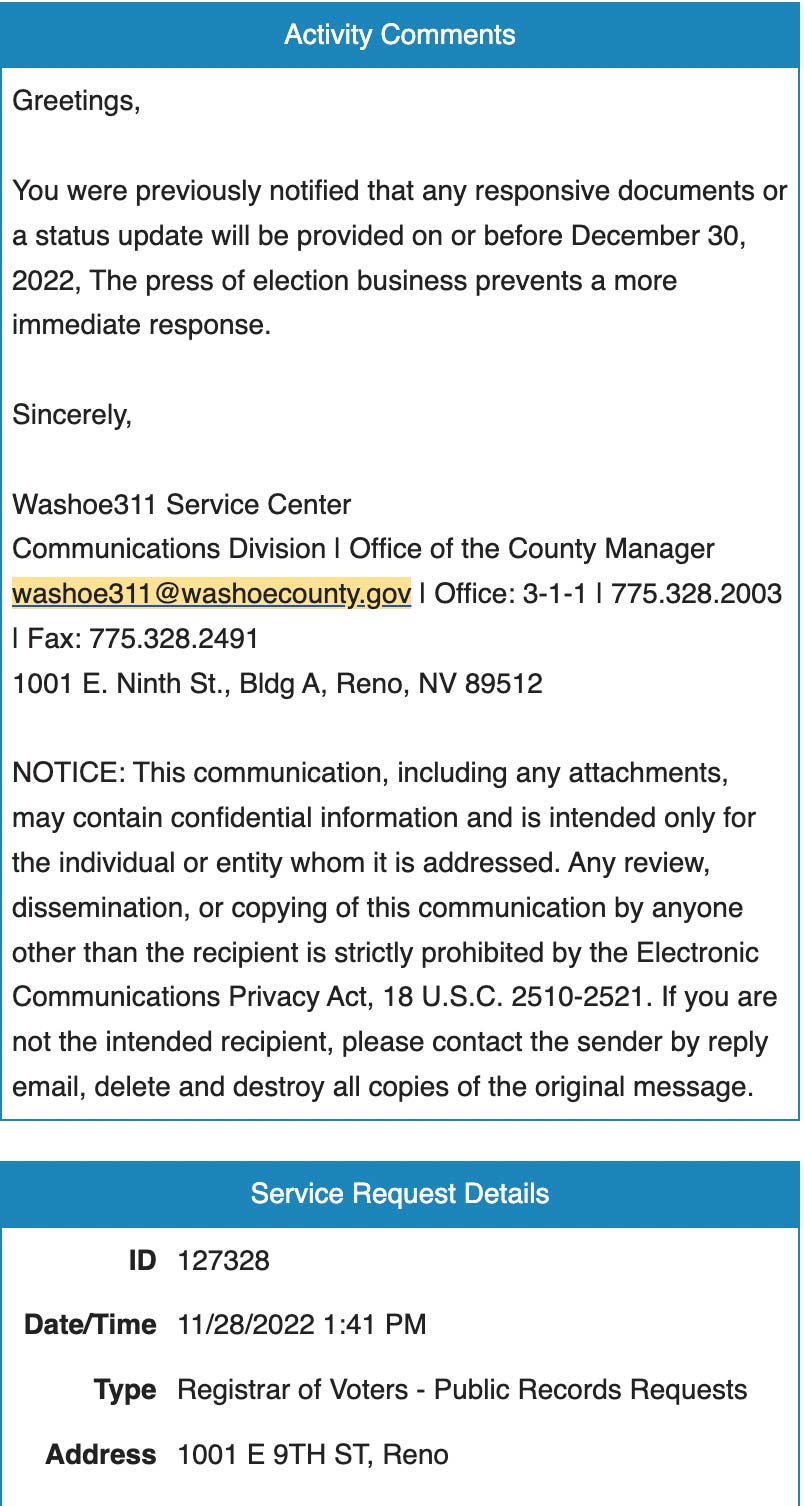 As my great Uncle told us, “It is the first responsibility of every citizen to question authority.”

Read this rebuttal a few times if needed, read the links to our previous never, covered rebuttals, look at the 10 affidavits sent to the Supreme Court, and make up your own mind about who’s telling the truth vs. who’s trying to cover it up.

As TJ said, where the press is free and every man able to read, all is safe.

We see hand and glove between the county and the press. This is never a good thing.

Share this letter everywhere. People must have both sides of a contest, then make up their own minds, not have their minds made up for them by the so-called press.

Fun Fact, folks, did you know in Nevada, you can check to see if the ROV received the envelope your ballot came in, but you can never see who they say you voted for?

Or if they even processed your actual ballot?

Just the envelope. That’s all you can see. Let that sink in.