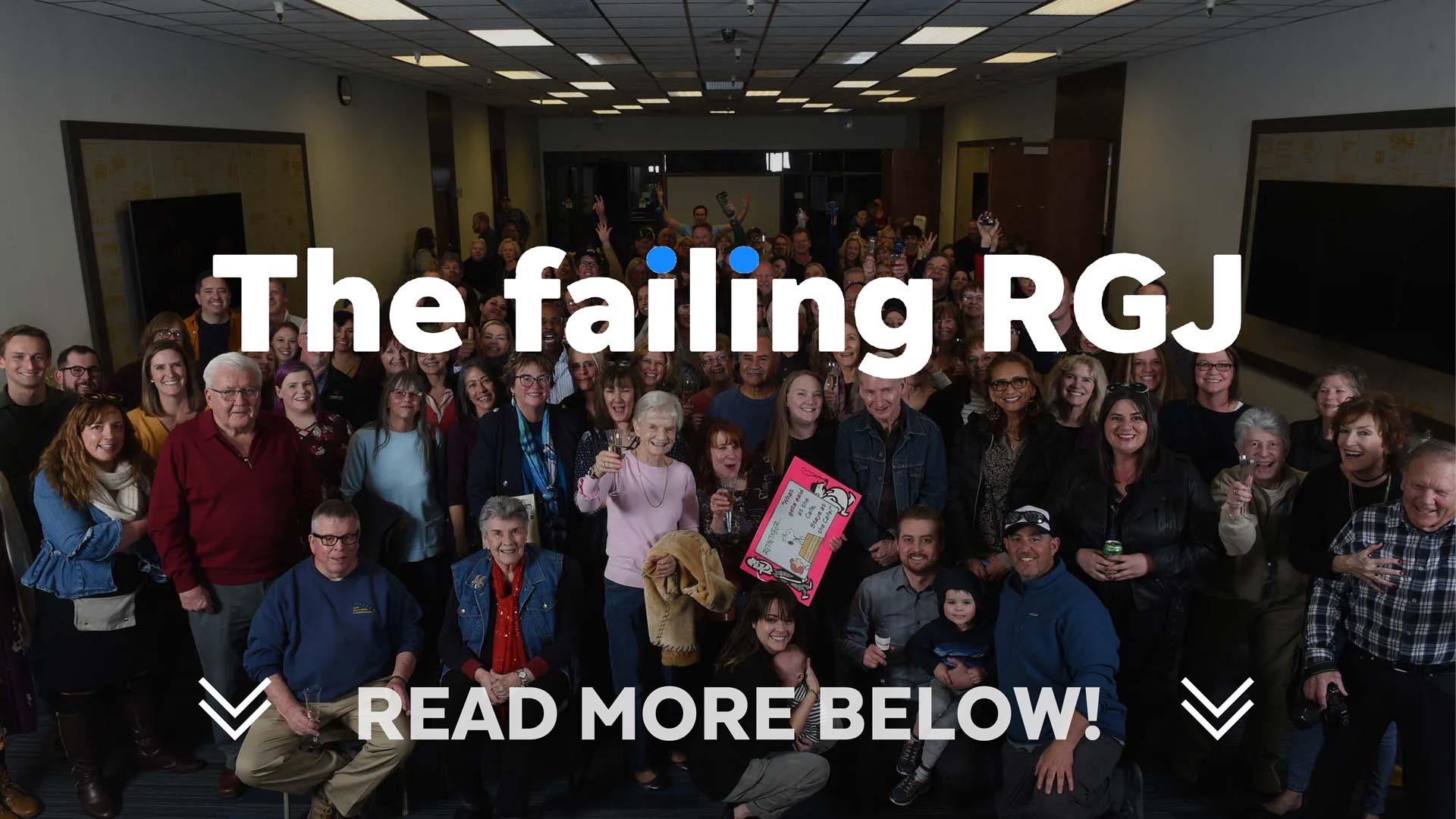 So a few of my friends sent me a recent slander piece on me and a couple of others perpetuated by the ultra-failing RGJ.

I usually just ignore these propaganda pieces because I truly believe God will show I-we have been telling the truth all along.

These people then who lie about me-us will be shown to the world as traitors to the county and country that they are.

These so-called “hit pieces” our PAC sent out were all true statements. Everything we’ve ever said we can back up, or we wouldn’t have said it.

Of course, the RGJ and other propaganda pieces will never show you the truth. They spin it in hopes you’re dumb enough to believe it.

The people they use to attack me-us, you should look into.

Simply call ANYONE they ever worked with to see what they have to say about them.

Call ANYONE in politics in the counties they used to live in and ask what they did politically there and what they and others think of them.

God willing, you’ll see soon all these people have been lying to you. Where will they go? What will they say then? The truth is coming, it will get out, and these people will be exposed for the sellouts they are.

You’ll see his questions, and you’ll see my answers, yet somehow, they were never put into this propaganda piece.

As I told him today, as George R. R. Martin told us, “When you tear out a man’s tongue, you are not proving him a liar, you’re only telling the world that you fear what he might say.”

Of course, he’ll have some excuse as to why it didn’t make it into the propaganda piece, but you can clearly see we met the deadlines.

Let this show you once again. If I’m wrong, come take our rewards. We recently posted another $50,000 reward to prove us wrong. Guess what? Everyone who has tried from last night to tonight said we are right once again.

It’s very simple, I was being lifted up by these same people as the darling of Reno offering affordable homes to the people in need, as soon as I showed the truth about our elections being selections, I became the pariah.

These people in these ultra-failing propaganda papers will soon be out of business, you know they are lies and half-truths at best, and you don’t trust them, nor should you.

Alternative media is raging, and things like the Nevada Globe are exploding. Hell, even our little blog here gets more views than these local Goebbels papers.

You’re waking up to the truth, your waking to their lies. Sleep no more. Speak out.

Here was what you were not allowed to see:

I’m working on a story about election fallout that is critical of your role in the Washoe County Republican Party.

Below are questions I’m seeking responses on. Feel free to respond by text or email if those are your preferred methods, but I’m happy to talk, too. The deadline for replies is noon Wednesday (tomorrow). So you know where I’m going, the gist of the story is that the Washoe County Republican Party:

That’s what numerous people I’ve talked to have told me. Obviously there’s another side and so that’s what I’m seeking from you. I’ve also emailed the story summary and similar questions to Bruce. The story gets submitted at 1 p.m. Wednesday.

Here are my questions (feel free to send separate responses on each if easier):

If easier to talk (I think it is!), let me know a good time to talk between now and noon Wednesday. I’m available on my landline at [REDACTED].

P.S. I’m sending questions and the story summary to Bruce, too.

I would be interested to know if these people donated to a campaign, knocked on a door for a candidate(s), or did anything to help ensure their neighbors vote counted legitimately.

We often find people who complain actually produce little to nothing more than words.

I am very proud of what we did and are doing.

I can sum up all these questions in one sentence:

Republicans we’re told were outspent in Nevada 5 to 1 and our election results are far from truthful.

Ok but I’ll elaborate more for you as follows:

Why do they care how I personally spend my money or how our PAC spends its money? Not a penny came from these whiners. Additionally, I trust zero numbers, statistics, or what party supposedly has a stronghold if it comes from the Washoe ROV reporting. Their data is the furthest from trustworthy.

I’d love an example, and again, it’s not their money. If they’re so passionate about helping, why don’t they pony up the money? We spent the PAC money and my money on candidates we believe in. Period.

I have zero to do with Nevada Liberty, never have, people continue to lie about me as they are with this fiction.

I had zero to do pushing any motions to remove, or censure anyone, I literally have one vote as does every member.

It’s sad, all parties now KNOW there are election issues. The true election deniers are those who deny we have election issues. You won’t believe how many Democrats, Independents, Republicans, etc all tell me now they know I was right all along. Our elections are a disgrace and until they are cleaned up no results can be trusted in Nevada. Additionally, all the people who say you need to promote candidates, not election integrity, I say you must do both. All the promotion in the world by itself won’t matter without integrity in our elections. As we now see.

Here are my questions (feel free to send separate responses on each if easier):

We simply tell the truth about people. We don’t see that as attacking. They lie about me, that’s attacking.

I disagree, we did both around 50/50. We try to show the problem and then the solution.

I would ask who these civic groups are. For fun, if you know, look to see who these groups actually supported and how did they support them. I think you will quickly see the groups who did the most financial supporting of candidates were on the Democrat side and typically tied to George Soros.

Again, the data is the furthest from trustworthiness. I believe people should have as much knowledge as possible. For instance, again, the elections are completely untrustworthy, people need to know this, more now than ever do. People need to call it out. Not sit it out!

I was very clear, people still must show up and vote yet push for election transparency and accountability.

The data your looking at from the ROV again is completely untrustworthy. You can’t say Republicans didn’t vote or Independents didn’t vote based on the ROV reporting. It’s complete fiction.

Take their list of people they say voted, it’s right on their website, even their phone numbers. Call these “voters” and you’ll quickly see more than 30% of the people the ROV says voted, will swear under penalty of perjury, they DID NOT!

So full stop, 30% of the reported voters and their votes are completely wrong! These candidates they say won, in many cases DID NOT. It’s the Washoe County ROV data, not mine, our teams, it’s the ROV’s, call these people for yourself and you’ll see I’m right, once again.

I and our PAC knocked most every voter’s door in Washoe, we additionally touched most voters 6-8 times. Show me the complainers and what they did, nothing. They complained that’s it. I know our candidates won, it’s not based on delusion or a gut feeling it’s based on the data. What the ROV reports, vs what we find when we analyze it proves it. I could write a book on the fiction the ROV is putting out for you all to consume. You really should look into the ingredients of what you eat, vs just taking their or the media’s world for it.

That’s absurd. I am but one vote and voice. The people are party, not me. It’s their party, not mine. I could point out so many incredible things they’ve done as a party and committee, that was them not me. I’m proud to be a part of the people and our movement to get back to the America we all knew and loved.

It’s peculiar, I was one of the darlings of Reno until I pointed out what you all know or will know soon, our elections have massive issues.

Why is pointing out the truth so divisive? Maybe its because the ones who benefit from it are doing all they can to protect their way of keeping control over us and our money.

Me pushing the desire for free and fair elections for all, I make zero dollars from. This isn’t a hustle, this isn’t a business model, it’s simply the truth, some people can’t handle it.

The old saying goes, its easier to fool someone than to convince them they’ve been fooled.

Anyone believing the ROV data has been seriously fooled.

Wake up and say enough before it’s too late.

So sorry, I never saw that email. That’s why I texted Wednesday checking in if you wanted to comment. I thought your “have a happy Thanksgiving” response was your way of saying you didn’t want to comment. Now I see it got misdirected in my inbox. I’m not sure what to do. I’m on vacation for a week. Checking with my editor on how to handle….

Did you see his excuse? He “didn’t receive” my email…..strange, so he saw my email today that asked why he didn’t use a single response. Do you believe him?

Do you wonder why my responses didn’t make the paper?

I don’t bother posting the link to their propaganda piece as we get more traffic than they do, so why promote and help a propagandist that is actively working against us all?

They are ALL scared.

We are over the target, or you’d never hear my name.
We are far from done. This is far from over. We’re going to expose it all.

Links to the actual PDFs of the emails can be viewed below: