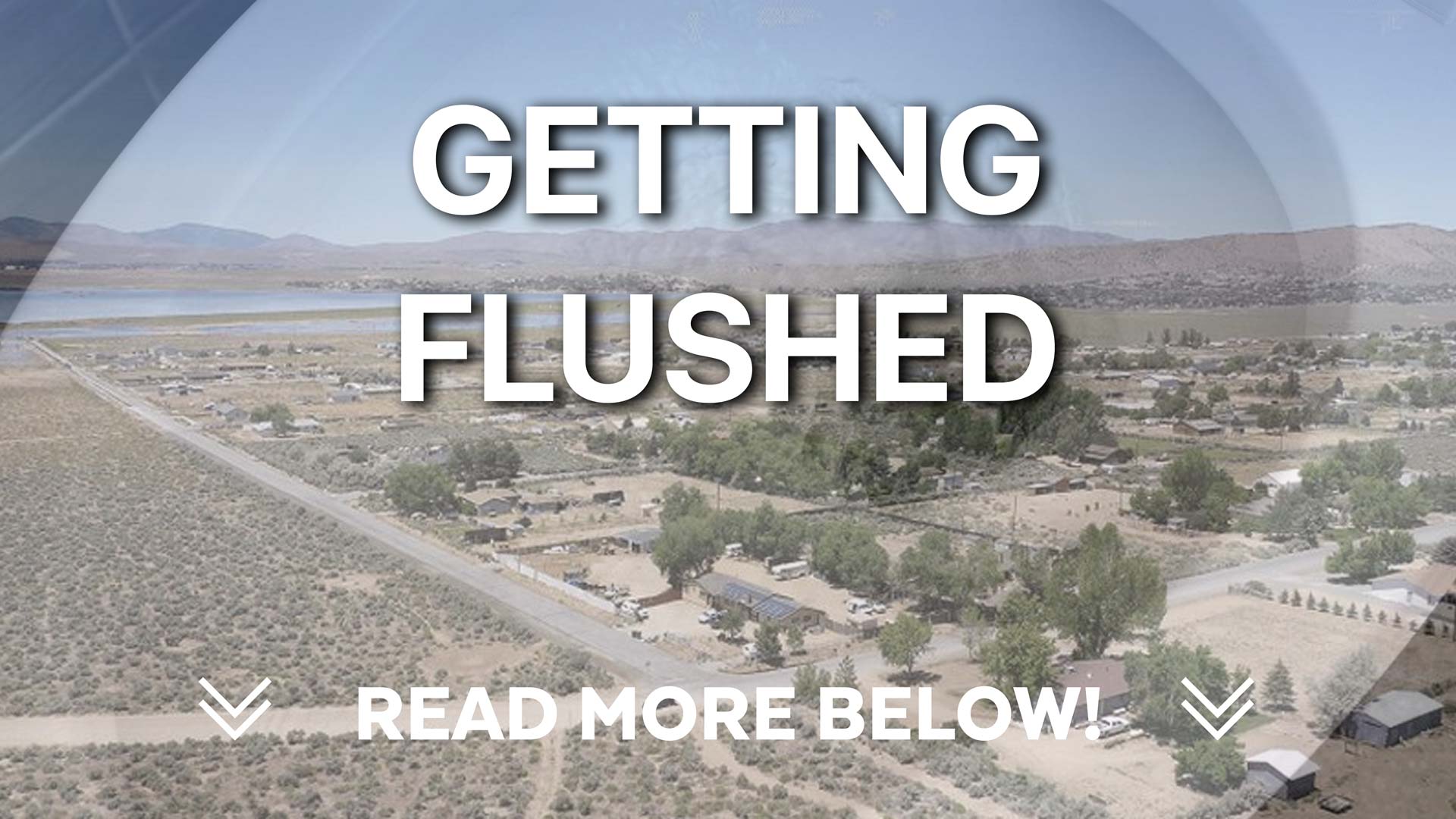 Today let’s broadly cover what the City of Reno did and is doing to homeowners.

Then let’s talk about what the Washoe County Commissioners are doing to further pick our pockets and show the real county workers that they don’t matter.

Flushed. That’s right, flushed. Lemmon Valley and surrounding areas are dealing with a serious issue, and it smells like crap. That’s because it literally is crap they are smelling. It’s not flushing and being disposed of properly!

We’re told the sewer is severely over capacity, yet the city still allows new builders, etc., to connect to it!

Full stop. If this is true, people need to be fired and or prosecuted, as the health concerns due to this are immeasurable.

You see, the City of Reno likes tax money, so the more areas, etc., the City annexes into the City ecosystem, the more tax dollars they collect to give to their pals.

They promise better service, amenities, etc., to those who would annex in, but the reality is the opposite. They typically get far worse services if they would have just stayed in the County.

These areas are typically far outside the true footprint of the City of Reno services, so you can only imagine how crappy the services can get….

Hence the smell of crap.

Luckily Mike Clark “Kent” has stepped up for We The People once again.

Clark, as still the acting county assessor, has devalued the price of homes in the affected areas by 10% and is demanding the city step up and clean up its crap. Literally.

How the city can allow this to continue is appalling.

Focus on the issue of health.

Folks, people can get sick and die from this. We’re told many are already sick!

If this huge health issue is deemed to be malfeasance, the people responsible could be charged with crimes as high as murder!

It’s even getting some coverage:
https://www.2news.com/news/swan-lake-residents-granted-property-devaluation-by-washoe-county-assessors-office/article_940d3ea6-7a4c-11ed-a687-9b0ad7d05782.html

The city better clean up its crap ASAP!

Now let’s talk about the board of county commissioner meeting scheduled for this Tuesday.

Folks, talk about what appears like kickbacks, payoffs, and the total middle finger to the real county workers and We The People. Tuesday is mad!

Have you read this?

It’s the agenda for Tuesday.

Look below at how many times Lucey is trying to pass out our taxpayer dollars. 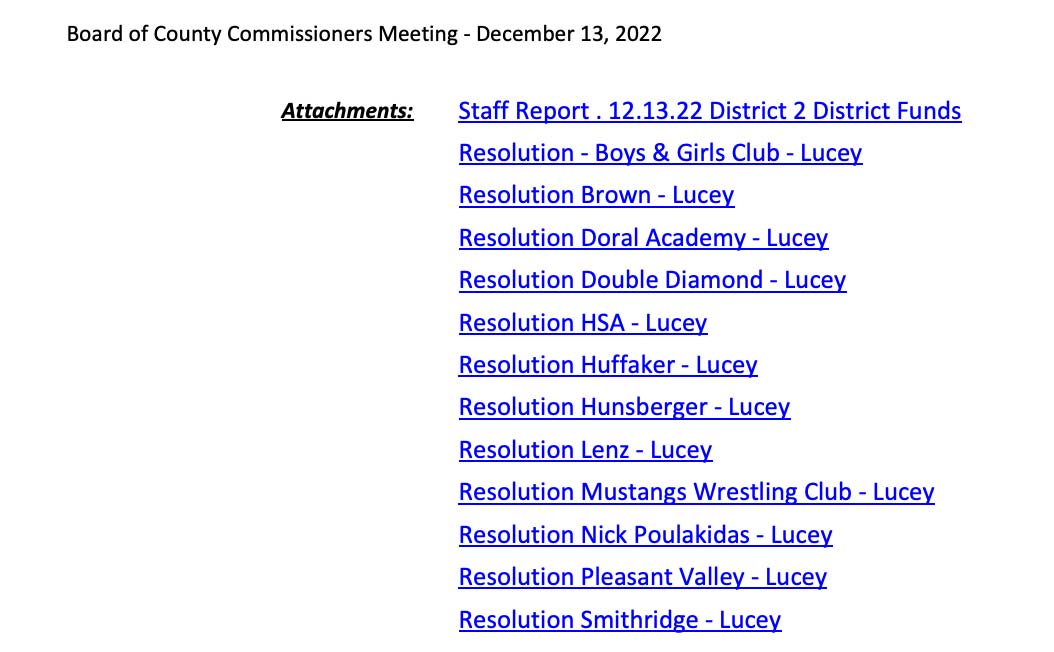 If Lucey and the gang are going to spend this kind of money, every not-for-profit should be asking why they can’t apply for it!

Is Lucey on the board of any of these organizations receiving our money? I urge you to look at each of them and then ask does this seem like a conflict of interest from ole Bob Lucifer.

Oops….Commissioner and Treasurer? Funds going to them?

Again, I have no idea if this is the best charity on the planet. It very well could be. This just seems like a conflict to most of us.

Ok, now let’s touch on where it gets really ugly for the real Washoe County workers.

Bob Lucifer and Kitty “Cheech and Chong” Jung, on their way out with help of “fake” commissioner Hill and Sexual Predator Vaughn Hartung Hotdog, plan to give away potentially millions of OUR dollars to their pals.

Whatever do we mean?

Huge raises now and HUGE severance packages if we fire these people! Not to mention the retirement monies we may pay for each of them for another half century!

Look below, look at what they will most likely vote in regardless of however much peaceful opposition we impose.

Remind me again who the assistant county manager is again?

Oh yes, the woman Bob Lucifer reportedly is or had a sexual relationship with.

Bob is alleged to have been having sex with this woman, and now she’s getting a huge raise?

Does anyone see a potential conflict?

Look at County Manager Eric Brown’s raise and how a golden parachute is also up for vote too!

Additionally, these people below will all get raises up to $90.90 per hour!

The Director of Human Services

Folks! There are over 3,000 County Workers who actually work for We The People. Where is their raise?

Why do these so-called leaders get huge raises?

We say NO to raises for the leaders and give the money to the real Washoe workers!

The 3,000 plus their families are just trying to live and survive through the same crap their so-called bosses created for them and us! Give it to them if it must be spent!

It’s laughable what the county says these raises will cost the taxpayers. They severely downplay the fact that these so-called leaders could be paid for over a year if fired and still potentially get lifetime retirement paid by us!

Folks, this is potentially millions and millions of dollars we’re talking about!

They are as transparent as mud or crap if you will, with us.

So not only are they showing the Washoe workers they care zero for them, the City of Reno is currently saying they don’t care if the residents in Lemmon Valley live or die.

See a pattern? These people hate you, and they sure as hell hate me.

Folks, people need to call this crap out peacefully.

As we wrap up here, I thought a good close would be to show you the big high five they want to give Bob Lucifer on his way out. 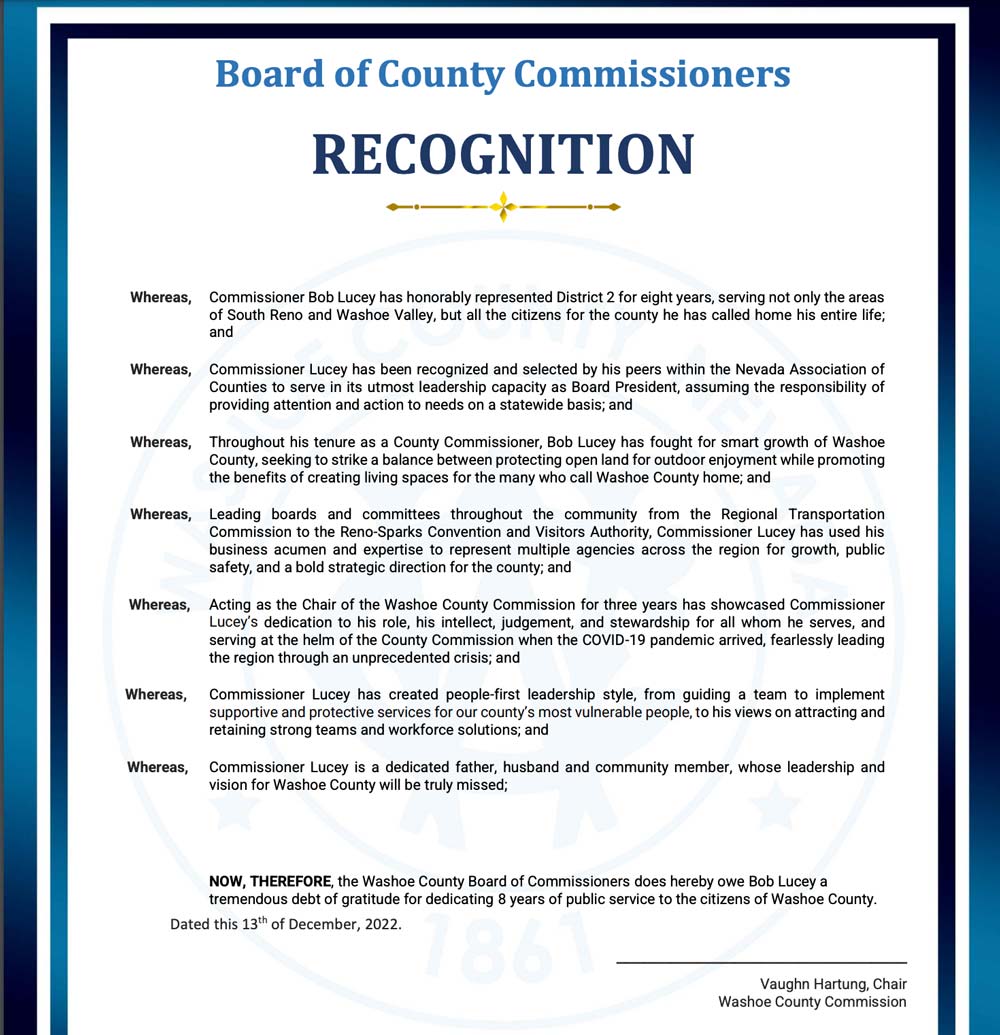 “Whereas, Commissioner Lucey has created people-first leadership style, from guiding a team to implement supportive and protective services for our county’s most vulnerable people, to his views on attracting and retaining strong teams and workforce solutions”

This, to me, is like one bad guy giving a high-five to another bad guy leaving a crime scene, saying see ya on the next one!

If you’re one of the hundreds of county workers or the hundreds of thousands of Nevadans who may have a family member who read my letters, you might want to peacefully ask where their raise is.

Raises for thee, not for me, right?

Raises for the leaders, we the serfs are forgotten, except when we’re needed to do something for them. Remember that, leverage that.

Call out this crap peacefully, do not let them simply rob us in the sunlight.

The silver lining is We The People fired Bob Lucifer, and Mike Clark Kent is taking the-OUR seat!

This means we’re all going to see what we were missing for the past 8 years and NOW what real leadership for the We The People looks like! Not just in District 2 but in all 5!