So this is reno, won’t publish our rebuttal, so we’ll give it to you here. 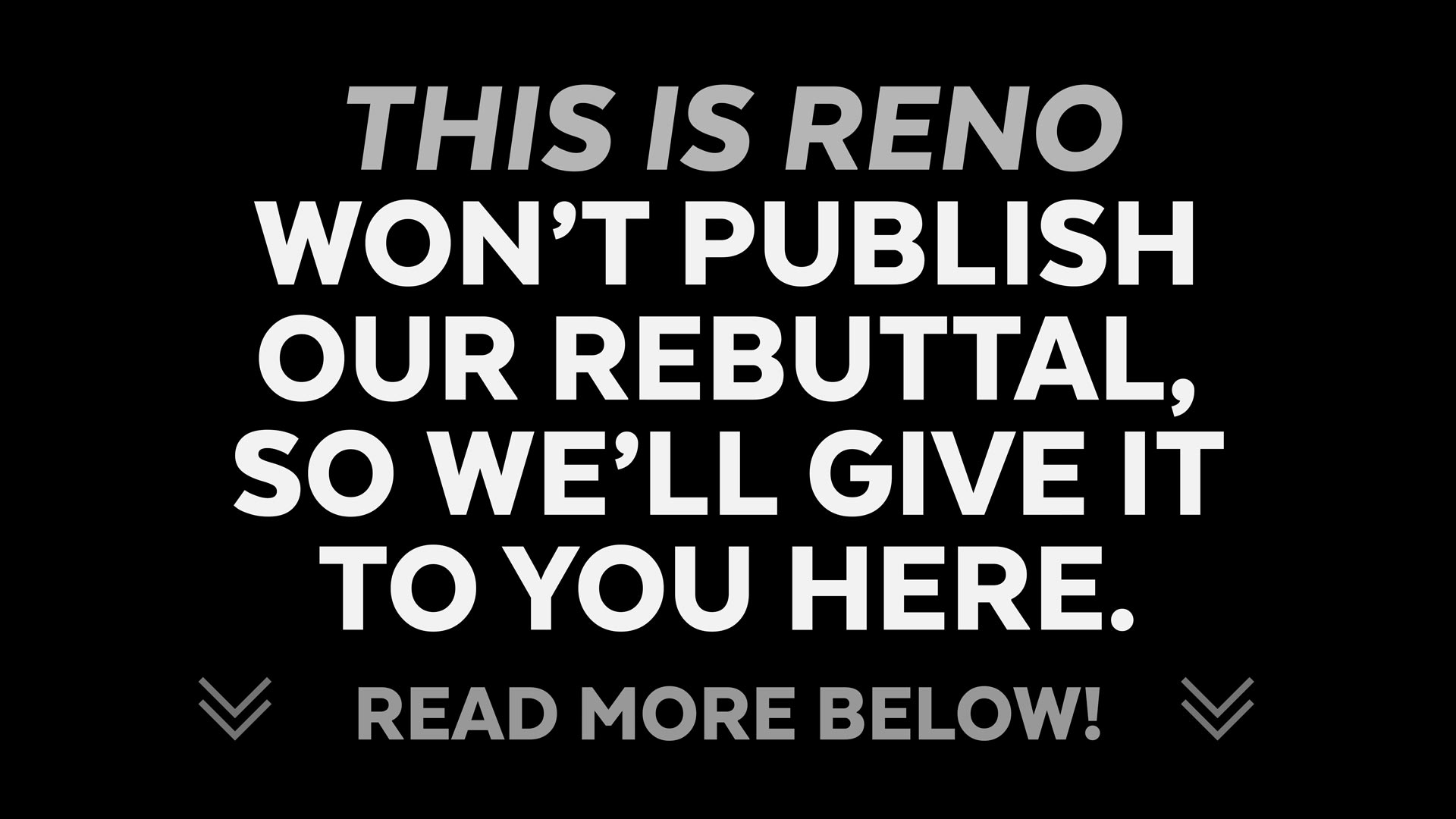 RE:  Richard Jay’s Response to the Franklin Project’s Community Mailer on Election Issues

So this is reno, won’t publish our rebuttal, so we’ll give it to you here.

Additionally, we won’t link to their site as we don’t want to increase any traffic to publications who show apparent bias, propaganda, and programming versus news.

Here is what he said:

Right wing mailer not based on data and facts (opinion)

A mailer sent by the right-wing Franklin Project PAC led by California transplant and crypto and conspiracy enthusiast Robert Beadles.

A mailer recently sent by a right-wing group contains many fallacies and is flat-out disinformation. One does not know where to begin.

Yes, due to the overwhelming support by voters of the WC-1 tax the Washoe County School District has been able to build eight new schools. One new elementary school is under construction and another school is in the planning phase.

More than $225 million has been spent on school repairs or renovations, and expansions to high schools, middle schools, the bus yard and the overused nutrition center. Just look at the number of free lunches provided to students – all WCSD students are eligible for free meals through 2023.

Yes, $1 billion has been spent; that planned spending was made very clear in 2016.  Remember, the WC-1 audit passed with flying colors and Trustee Church acknowledged it in an email to then Superintendent Kristen McNeil.

They claim we are amongst the lowest in the nation as to education. We do rank very low in funding. Why?  While Nevada was #49 in the nation two years ago, academically it has risen to #35.

The bigger question is, why are they using statewide data and not Washoe County? Could it be that WCSD remains top ranked in AP scores, SBAC scores improvement, financial accountability, safety and National Merit Scholars in the nation!  The data used in the mailer is several years old at best, and much of it relates to Clark County, not WCSD.

Funny how they have manipulated what once said 11th graders to 11-year-old students and that elements of SHARE are still under review by the parent/staff committee. State mandate requires school districts offer a sex education program for students, NRS389.036. On the district website the course material is clearly labeled “DRAFT.” 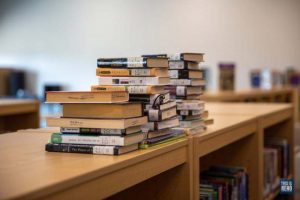 Where does it state district schools teach racism?  When asked to provide links to prove their statement they never do. Why?

Why do they claim 85% of our students are functionally illiterate? That data was from 2016 and a report about Clark County!

They provide an interesting twist on voter turnout. They claim just 100,000 voters turned out in the most recent election. Yes, and that was for a primary election. Primary voting is traditionally light, and same as 2020.

The general election in 2020 saw 252,563 voters representing nearly 83% of the total registered voters at that time. Funny how the data can be manipulated to show what they want you to see.

The claim about a commissioner candidate being a “devout atheist who is fascinated with his son’s penis” is laughable at best. (Editor’s note: Edwin Lyngar has written about his sons and the tradition of circumcision in the past. Read a 2013 essay here.)

It was interesting how they manipulated the last name of a sitting commissioner to “Lucifer” in the primaries, another example of mudslinging at its best.

As to Reno crime and the claim it’s now the highest in Nevada. What year are they using for their crime statistics?

Please research, look at the statistics for yourself and know when the wool is being pulled over your eyes.

Richard L. Jay has served more than 30 years in community leadership roles in the Reno/Tahoe area. A graduate from Reno High school, he received his Bachelors of Science in Economics from the University of Nevada. He also serves on the City of Reno Financial Advisory Board, and is an active member of the Chamber of Commerce, Sparks Rotary, and the Reno Youth Sports Association. In 2012, the Moana Sports Fields were renamed the Richard L. Jay Fields by the City of Reno. He was appointed by the City of Reno as Reno Tahoe International Airport trustee since 2017. He sits on the WCSD Safe and Healthy Schools Commission.

Not based on data or facts, says Richard Jay?

Interesting, especially if you look at Jay’s lengthy career in supporting the bureaucracy surrounding our county.

Do you think he might be a tad biased?

Maybe he’s trying to cover for some of his buddies who are burning our City and County down?

It looks that way to us, based on his attack piece against the Franklin Project.

Hell, all he had to do was go here to get most of the data and facts. Just click the hyperlinks on the article.

Jay defended Lyngar’s fascination with his son’s penis so nonchalantly.

He then pointed to the wrong blog post trying to cover for the District 5 County Commission hopeful.

Here’s what he really said.

Thank God Jeanne Herman is running against him. God save us if Lyngar gets in.

As for the elections, it’s very hard to figure out exactly how much is being spent in Washoe on our elections.

The team did the best they could, see the attached spreadsheet based on what they could find.

Look through the County budget, it’s dismal in reporting what we actually spend.

What is the County hiding?

Why won’t they report all costs attached to our elections?

In the Franklin piece, they went ultra-conservative with a 2.5 million spend.

Truth be told, it would be far less if we cleaned our voter rolls.

We could do the whole election cycle for less than $1.5 million.

We submitted the plan to the county, but they never addressed us.

As to Jay’s claims on the school system, Paul D. White explains here:

As a career educator, and someone who contributed information to the Franklin Project’s excellent mailer, primarily the education statistics, I’d like to apologize to anyone who read Richard Jay’s confused and false efforts to discredit the mailer’s information. Having never worked in education for even one minute of his life, Mr. Jay chose to criticize something he knows less-than-nothing about, preferring to remain in his years-long role of WCSD lap-dog/education gad-fly (“lap-fly”?)

To correct just a few of Jay’s false claims:

Nevada DOES have the worst, lowest-ranked schools in the United States, and it’s not even arguable by anyone who knows anything about education (which excludes Mr. Jay).

The gold standard for these rankings is the Editorial Projects in Education foundation, who for over 20 years, has published an annual document called “Quality Counts.” I spoke personally less than 2 years ago with the foundation’s lead researcher for this document. He told me, “For more than the past DECADE, Nevada schools have AVERAGED 50th place in state rankings: statistically worse than ANY other schools in the nation.”

When I asked the researcher whether Washoe County schools were any better than the rest of the state, and whether our schools as a whole were improving, he replied, “Not significantly.” Click here.

YES, as indicated by annual scores, year after year from our STATE test (Smarter Balance) and the NATIONAL test (National Assessment of Education Progress). These scores show that 60-to-85% of our students, depending on race, score below “Proficient.” That is an education euphemism for the fact that the majority of our students cannot read or do math at a level that even approximates their grade placement. “Functional Illiteracy” is defined as: “Reading and Math skills that are inadequate to meet everyday needs.” In other words less than half of WCSD’s 60,000 students lack the basic literacy skills to live independently.

YES. And it plainly states that in the school district’s SHARE (sex ed.) curriculum  (see slide #21)

YES. The only reason WCSD records don’t indicate that (remember, I’m a lifelong educator) is because absence rates are NOT calculated by how many students are not on campus, but by how many of the missing students don’t bring a lame “absence note” from their parents (or write it themselves) when they return to school. This fact could easily be proven if the new Superintendent would simply open our campuses to unannounced visits by parents or Board members. But based on our new superintendent’s recent policies, she won’t.

WITHOUT QUESTION. And we could all see and hear it for ourselves IF the superintendent allowed unannounced classroom visits. But she doesn’t. And she won’t, because she knows it’s true…and supports it herself. Click here.

As to Jay’s assertions about crime.

Obviously, he hasn’t gone downtown where we had, what – two murders by gunshot and one by a vehicle just in the last week.

Here you’ll see we are 45% above the national average for violent crime.

Here you’ll see we are the most dangerous city in Nevada.

All on his buddy, Hide’n Hillary Schive’s watch.

Schieve has to go. George “Eddie” Lorton must be our next mayor, or we’re all going to be so much worse off.

The facts and data are here. They love to attack the messenger, not the message.

Folks, do your own research and look around town. Look at our schools. Is everything great like he says?

Reno and Washoe County are being run into the ground at our expense. It’s time we stop being worried about being called names. We need to simply tell the truth and say “enough!

As to who is giving you the facts, don’t believe either of us. Do your own research. Click the links, and see for yourself.

It’s time people stop making excuses and covering up for the destruction of our county.  We need to call out the people and policies who are doing it.

I’ve had enough, have you?

This state, from top to bottom, is run by Democrats. Have you had enough of their failures yet?

Look, I’d love to see you -the readers (Not Jay or Lyngar) run for office. I don’t care what party. Just get involved!

Obviously, we’d rather see different candidates in some races, but there’s no way in good conscious I can vote for any Democrat in Nevada.

The Democrat party of old is gone. It’s now gone communist. We’re Americans!  That’s NOT what we stand for, and it’s time to say “enough!”

Vote Red down ticket and George “Eddie” Lorton for Mayor. Save yourself and your family.

The second headline for Jay’s article called me a “transplant from California,” implying that Nevada is not really my home.

I don’t know whether it was Jay or the Editor who wrote that, but either way, it puzzled me. Why was I being singled out for this fact when 75% of Nevada residents are from some other state? You don’t need to be so fearful boys.

Regarding where my REAL home is…I side with turn-of-the-century activist and union organizer “Mother” Jones:  “MY home is wherever there is a fight (for justice).”  And if you don’t think we’re right this moment IN that fight in Nevada, you need to wake up.

Please join us in this fight. Join us in “Pray(ing) for the dead, and fight(ing) like hell for the living!”  (also Mother Jones)

Look at what the editor at This is Reno said.

You can fact-check most of her articles as well as Jay’s and see, again, selective publishing.

They have a narrative, not truth.

We’re awake, not woke to them. 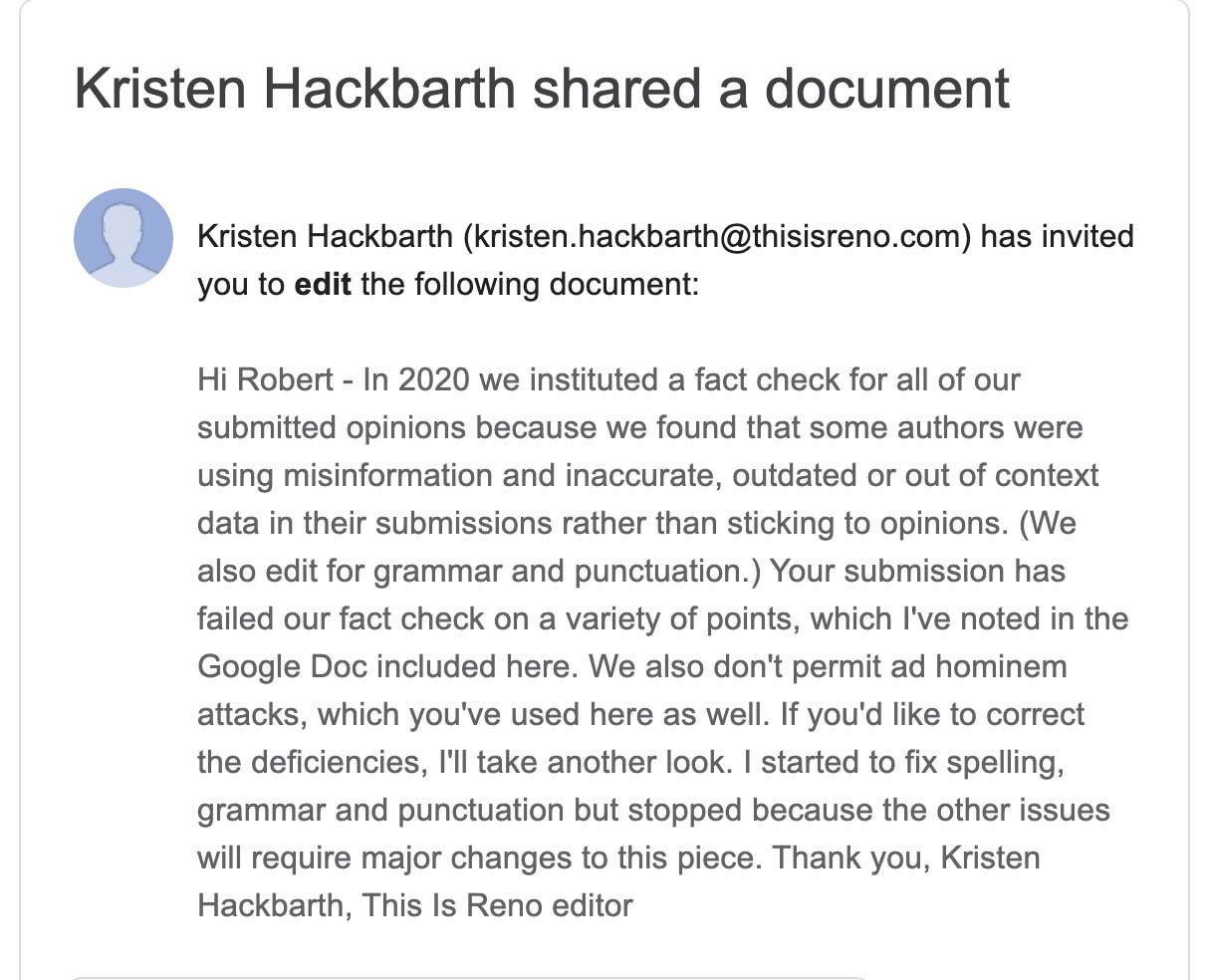