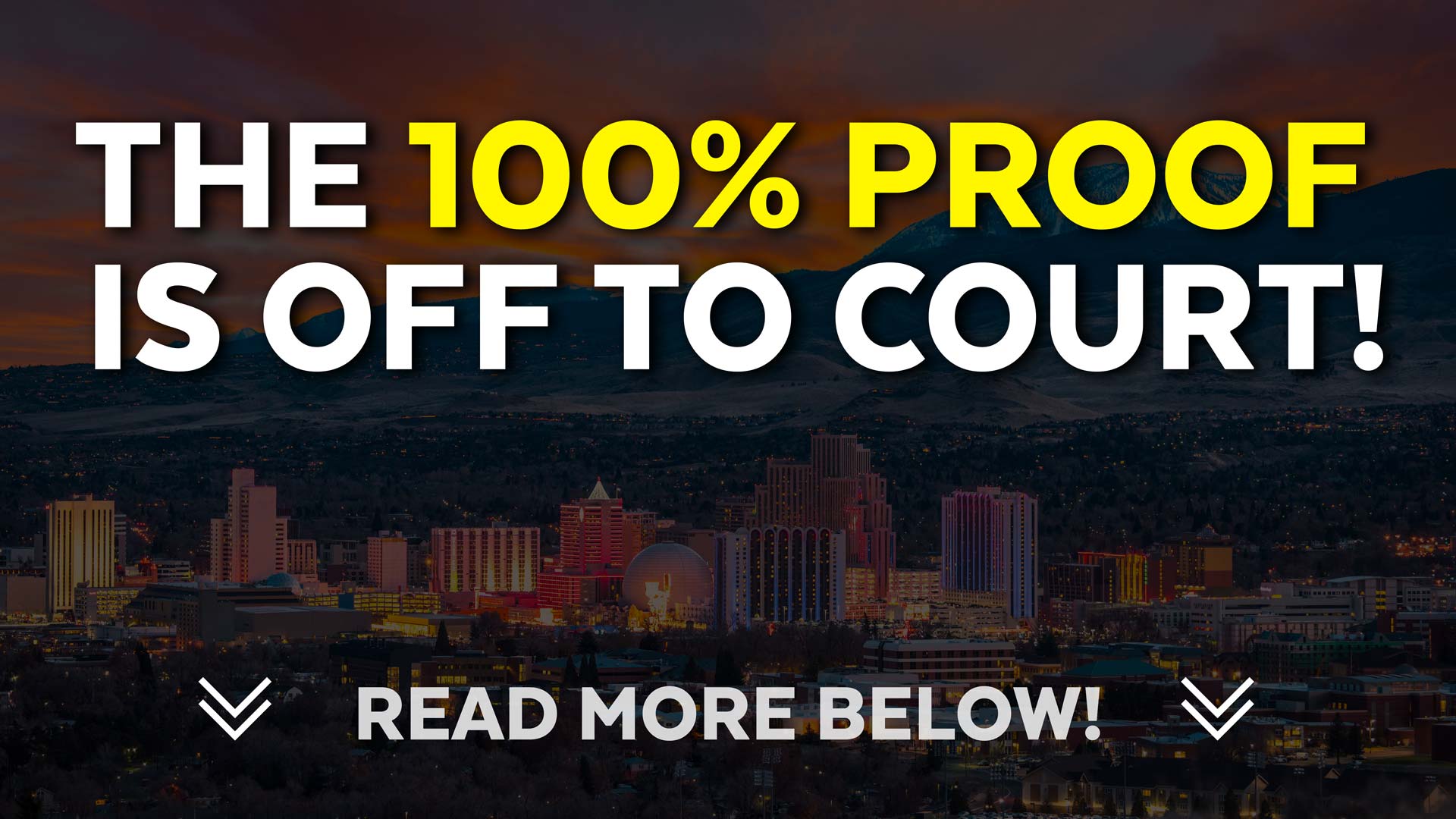 You have to agree, it’s been a wild past couple of years, and it’s coming to a head.

We built an incredible team back in January of 2021 to figure out what happened to our elections. How it happened, how it’s allowed, who does it, etc.

We did canvasses, scraped data, researched the actors deeply, uncovered the algorithm and machines that count every paper ballot and digital ballot, then give the results it was programmed to do.

We saw how, under the unconstitutional guise of a pandemic, servants changed voting laws to cripple election integrity, ensure the theft of our votes, and so much more.

We were labeled conspiracy theorists and worse, so we put out a $30,000 challenge to prove us wrong. All who tried found we were right. The press never covered it.

We pled to our County Commissioners to restore election integrity and were shot down by all except Jeanne Herman.

We sued Clark and Washoe Counties to ensure we would have court orders granting us meaningful observation into the election process. This way, we couldn’t be kicked out of the process for ten days just to be told who is the winner with zero transparency. We won. The press says otherwise.

The press and servants have fought us and lied about us this entire time.

We will be suing them.

We put a sting operation in place in the two largest counties prior to, during, and after our 2022 primary elections. This operation comprised the most incredible volunteers, paid operatives, military surveillance teams, and more.

Needless to say, we caught them violating nearly every election law, regulation, and statute in both counties.

We had our attorneys notify the Secretary of State, Attorney General, District Attorneys, County Commissioners, and Registrar of Voters that the elections can not be certified legally. We backed this up with gigabytes of photos, videos, and hundreds of affidavits; all signed under penalty of perjury.

Vaughn “Hot Dog” Hartung, the Chair of the Washoe County Commissioners, said something ridiculous along the lines of they had to certify it so we can then contest it.

This idiot is the same idiot we showed won his seat through a fraudulent election.

Regardless, they certified it.

We clearly saw candidates they say won, really lost. Take, for instance, Joey Gilbert. He won the governor’s race in a landslide, yet they called the race for Joe Lombardo.

Not only did we see they stole it from Gilbert, we 100% proved they did to some of the smartest, most accredited individuals on the planet.

The way Nevada election contest laws are written makes it almost impossible to contest and win.

The window to file the contest, get in front of the judge directly afterward, and show clear and convincing evidence Gilbert won at a breakneck pace would have been nearly impossible, so we bought time.

How did we buy time?

We did a statewide recount.

This gives us five days after the certification of the recount to then contest, giving us the time we needed to draft up the contest, lawsuit, get experts together, get documentation, etc. together, and so much more.

What proof do you say?

How do they do it?

Here’s a small taste for you:

Well, it’s death by a thousand papercuts. To start, we have “selected” servants who do everything they can to keep the rigs going because it’s how they gained power and don’t want to lose it.

Have you ever wondered why RED states go BLUE after election machines are used in elections? It’s not by coincidence.

We have voter rolls that are possibly as high as 52% in error. This means nefarious actors can make it look like people voted like crazy or just enough for this, that, or the other person when really they are phantom voters, not legitimate votes.

We have an outside company that was contracted to clean our rolls or at least give our ROVs etc., the information to clean our rolls, yet they don’t. They actually appear to add more voters or people en masse rather than clean the rolls.

We have technology in place that gets more and more complicated that most of the election staff has no clue on how to use and requires the vendors to be present through the elections and run our elections.

We have many unconstitutional laws.

We have mail-in ballots for basically everyone, then machines counting the bubbles and ballots, both paper and digital, then the machine simply does what it’s programmed to do.

What’s it programmed to do?

Across most to all races, some in the primary election and some in the general election, the machines are programmed with predetermined outcomes.

The election workers are hand-picked. Many are temps. Some are part of a traveling circus of election riggers who go state to state to rig elections.

Ever wonder why elections are staggered?

Ever wonder why it takes six weeks to count the votes for a small county election, yet they can recount the entire election in 2 days with a skeleton crew?

Ever wonder where all the liberal protestors to free and fair elections are? I can hear the call now, phantom voters; please show up and make yourself heard!

Notice the only opposition we’ve ever had were paid operatives?

They mail ballots to everyone, and anyone can fill them out and bring them in by thousands to the ROV.

There is no ID required, the signature verification isn’t done, or if it is, it’s done meaninglessly.

Ballot envelopes contain the voter’s name, party, and voter information. Many are segregated and thrown away.

Election workers also know-how and who to segregate by simply looking at the envelope.

The physical ballots are then run through machines that count each ballot and bubbled vote, and this data is fed to the EMS machine.

The actual physical voting machines record the votes to a thumb drive that is then plugged into the EMS machines that then counts the votes on the thumb drives.

An algorithm is programmed and deployed to call winners for different races that, no matter what, will declare them the winner.

This algorithm is running to count and shuffle votes around to make sure this happens. It’s basically through beautiful sets of main and child algorithms injecting votes where needed and deleting votes where it’s required to achieve their predetermined outcome.

The election also went from one day to six weeks, so they have all the time in the world to backfill ballots, throw out ballots, etc., to meet whatever the algorithm says vote-wise as to who the preselected winner is.

All the meaningful activities of the election process are done out of the sight of observers. They even break court orders and damn near every NRS to accomplish this.

The counting part is done behind closed doors, and the results are told to the election workers via a machine. Then these unelected people tell us who the winners are.

I could type a hundred more pages as to all the laws, regulations, statutes, etc., they broke just in the primary 2022 election, but I’ll keep this short(er).

Read our past posts; we cover some of the issues there.

Where are we at now? Why is this different?

Now, we’re at a crossroads, and we will either save our elections or lose them further.

We are awaiting the certification of the recount. Once that happens, we’ll file our contest for the governor’s race election.

Once we do that, we will be in front of a judge within 5 to 10 days making our case.

If we get in front of the judge, we can prove 100% that number one, the election never should have been certified, and all were made aware of this before they did it, most likely illegally.

Number two that Joey Gilbert won in a landslide against Joe Lombardo.

Now we can 100% prove both, but we need a judge, God willing, that is God-fearing and simply follows the constitution, and we’ll win.

What does that mean?

It means Lombardo is out, and Gilbert is rightfully in.

It means far more but let’s not speculate.

Now, if your saying Beadles, you haven’t given us the proof yet!

We can’t risk blowing it here in this post. Ask an attorney, then I’m sure you’ll understand why if you don’t already.

Look, bottom line, we have it, we have the absolute proof, it’s in God’s hands now to get us in front of the judge and let the truth be told, and justice prevail.

What can you do?

Spread this post to the four corners, show up and support us, and let your family and friends know that it’s happening!

People say the elections are rigged but can’t seem to prove it; we can.

Regardless of party, what we’re doing here, if successful, will benefit all Nevadans.

The current erosion of our State and Country is due to stolen elections and placed servants who seem always to do the opposite of what We The People want. It’s by design, and it’s time for the design to change. It’s time to go back to God and the Constitution, not further away.

Pray for us and get involved, now is the time; we have the proof, and now we just need our day in court.

If we’re denied it there, you know by now, there’s no quit in us; we will not stop, we will never bend the knee or bow our heads or walk away from this corruption.

We will finish what we started. Join us. If we fix our elections, we fix it all.

We need everyone awake to what’s happening here in NV, get the word out, and support We The People and our election integrity efforts.

We can change the whole landscape of the entire country, starting in Nevada, by showing it all and how it works.

Nevada is the worst in all 50 states for election fraud but the easiest to prove.

The time is now. Get involved.

We’re available for media and talk shows; spread the word to your favorite media people.

Additionally, not all election workers are corrupt; many are departmentalized, not even knowing they are running fraudulent ballots through machines or simply not understanding they don’t count the votes; they rely on a machine to do it and simply report what it says.
Some are too proud to admit they’ve been played, and some are too scared to come forward.
Know they are not all bad, but unfortunately for us, too many are.