Carmen and Crew… The Washoe Elections Must be Investigated

If we restore our elections, we restore it all. But unfortunately, many fail to realize that with broken and fraudulent elections—it has a snowball effect on our daily lives.

For instance, most don’t want CRT taught in our schools—and had Angela Taylor’s race not been rigged—Montegnese would have won, and we’d most likely not have CRT in our schools!

Our elections are literally rigged from school board to president.

Most people know something is wrong—but don’t know how to fix it—other than making more money or getting another job. That’s sad, it’s not their fault it happened, but it is their fault if they continue to play by “their” rules of this rigged game.

If anyone here thinks I’m exaggerating, feel free to join the $30,000 challenge, simply prove us wrong, and you’re $30k richer.

Now, let’s talk about the Washoe County Registrar of Voters and just a few of the issues we’ll go public with.

The ROV Deanna Spikula has been MIA since 3/8/22, it appears.

Heather Carmen now appears to be the acting ROV, and we wonder if she will follow in the lies and inconsistencies of Spikula or finally do the right thing for We The People, not the few at the top.

We see Jaime Rodriguez, who worked for Harry Reid for over a decade, now acting as assistant ROV, it appears. We have Jaimie caught in numerous inconsistencies and potential lies as well.

We also see that 4 of the 7 permanent ROV employees on their website are now gone as well! 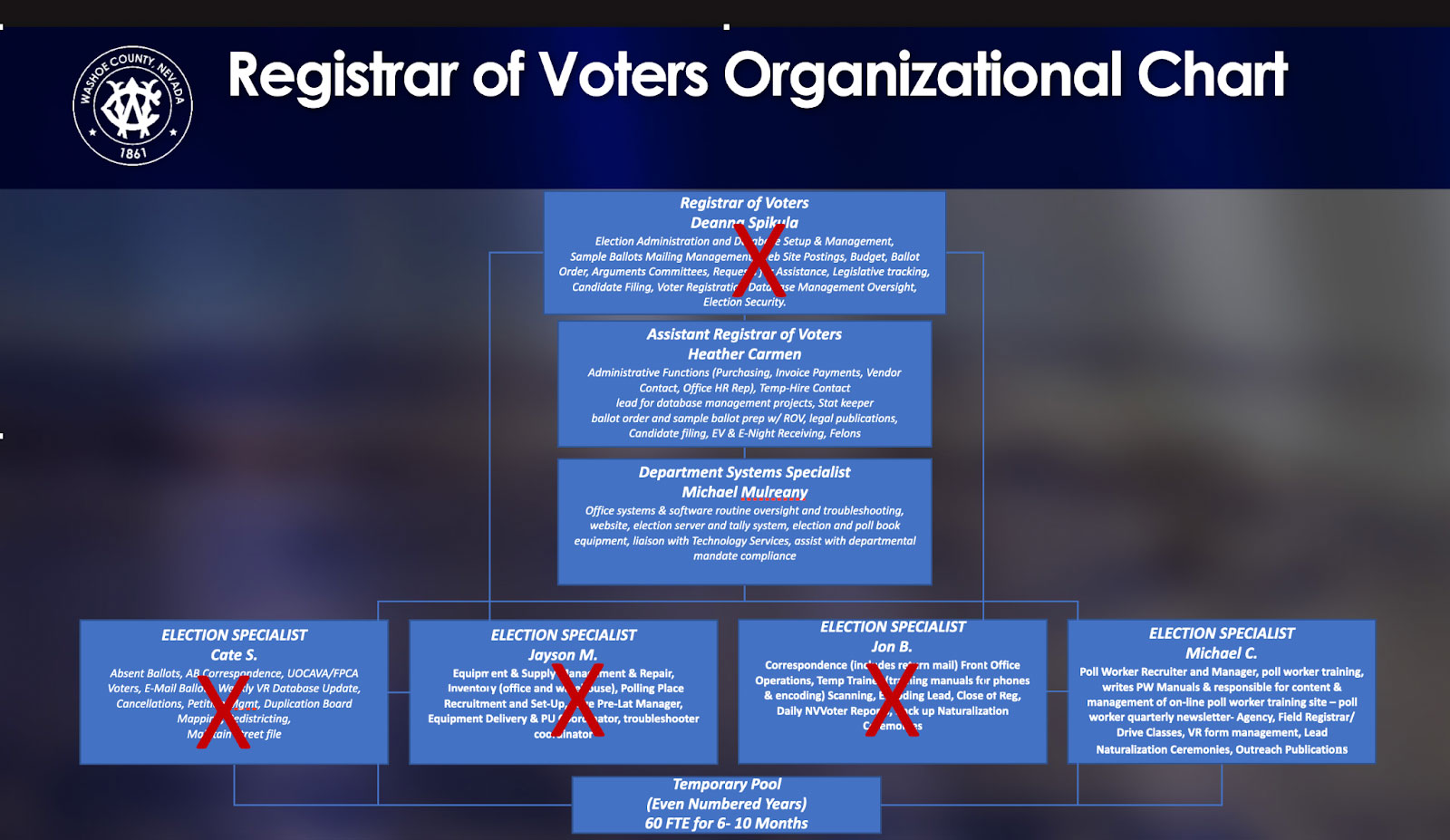 We have affidavits of employees currently working and observing at the ROV who say it is a complete disaster.

Nothing is being done correctly or efficiently, we’re told. The ROV is significantly understaffed, we’re told, and Carmen refuses to bring in some of the 4,000 volunteers who requested to work!

We’re also told Carmen brings in workers, then sends them directly home when they arrive due to her “messing up” the routes and duties of workers.

We also have affidavits stating that Jaimie Rodriguez, the Government Affairs director who appears to be the assistant ROV, is making ballot runs herself, collecting masses of ballots!

Remind me again what her training and background in elections are? We know her as the county spin doctor, why the hell is she working our elections?

In a walk-through with my attorney, the county attorney, Wvlashin, PLAN, Mark Elias’s Mr. Fox, Jaimie Rodriguez, told us they mail out SDRs to people! That’s short for same-day registration.

Notice here in their own training manual they say to use an SDR, and the voter must show ID and proof of residency! So why in the hell would you just mail these out without proof of identification and residence? Imagine what criminals could do here! 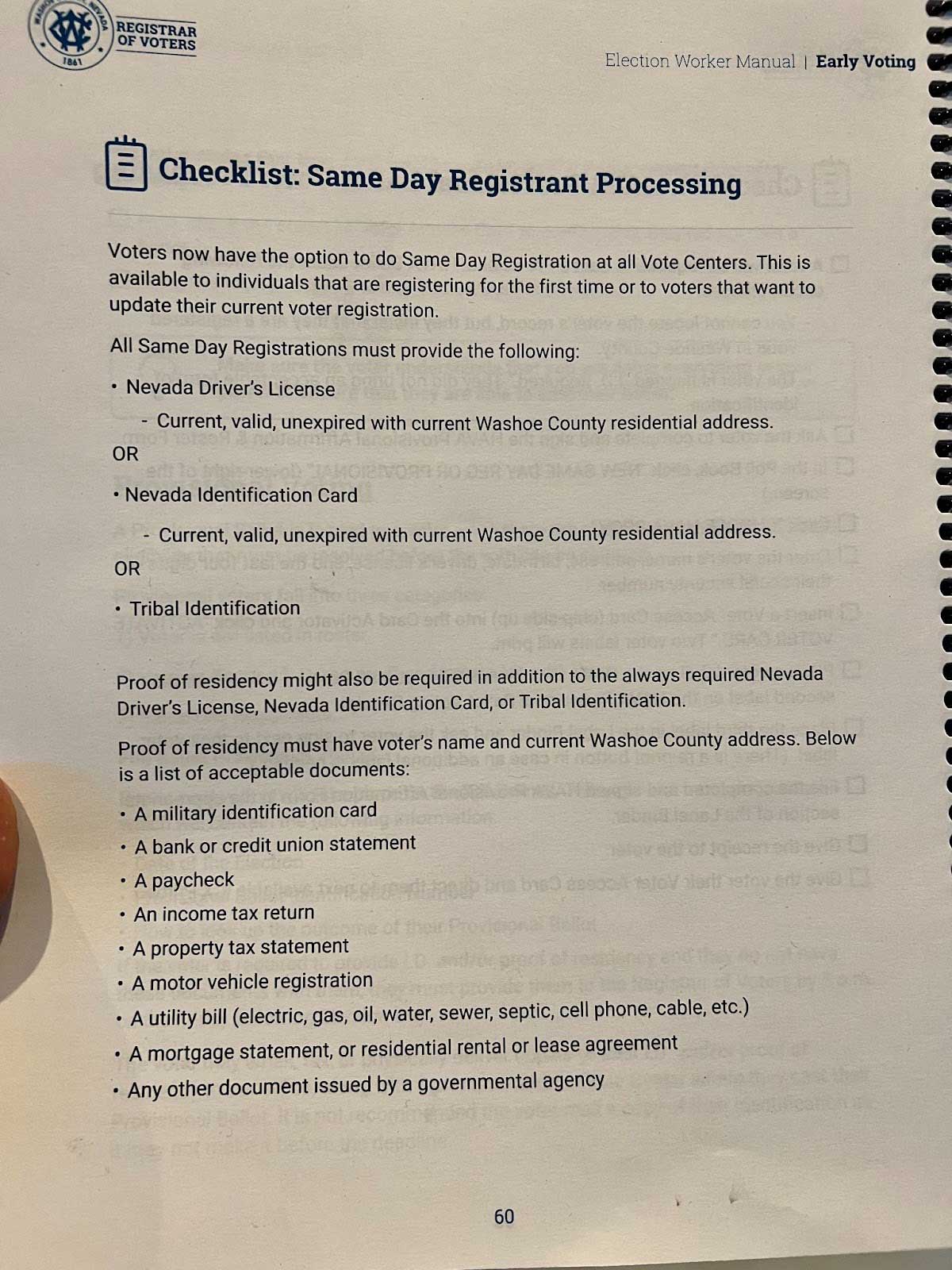 We notice they have live stream cameras that seem to consistently go down at night. So what the hell is happening there at night? Why do the cameras seem to go down when supposedly no one is working there?

We have two cameras in the main area that only detects movement, you can’t see what the workers are actually doing, and then there is a 9×12’ fart box “fish tank” where people are to observe the process from afar.

There is an additional area known as the tally room where the EMS machine and vote-counting software and machines are located. There are no cameras there, people could be working there all night, and no one would be able to tell.

This is the room they steal the elections in. Take our challenge if you don’t believe us.

Why are there no cameras streamed there for us? It’s not like you can see any identification on the ballots. They are anonymous—in fact—the only identification is on the envelope, and that’s removed early in the process. So why can’t we see what they are doing in there? It’s because that’s where they rig it!

Back to the envelopes, they are literally breaking the law; as reported in the last article, they have REP and DEM on the envelope so ANYONE can see what party you belong to and possibly throw away your entire ballot if “they” don’t align with your party.

Talk about secrecy; where is it? Surly not in Washoe! They removed this issue by Jeanne Hermans’s demand previously but now brought it back for our election! Why?

Then the envelope states to use the adhesion strip to seal it, yet there isn’t one!

It actually says you may destroy the signature by using another type of sealant!

We have countless affidavits of people who are receiving numerous ballots at the same address, ballots that don’t belong to them, missing sample ballots, workers scanning sample ballots and it counting as the person voting, and on and on.

We gave the ROV a list of 42,000 people who shouldn’t be on the rolls, yet there they are, still there.

Why does it matter?

For many reasons, for one, cost. Wvlashin, the Deputy of elections, says each ballot can cost as much as $8! In Washoe, they spoiled nearly 200,000 ballots in 2020!

Second, nefarious people can pick up these mountains of ballots and vote them!

Signature verification training is an absolute joke as is the rest of the training in Washoe. I know, I personally went through it! If I ran a business with that type of training I’d be out of business on day one! But fear not, our tax dollars keep them going!

As to the signature verification, I was instructed at their training, that they simply look for it to be not drastic, in other words, if your signature was a line of waves and a ballot came in as scribbles for you, they would accept it as long as it’s not a straight line!

That came from my training to be a worker for Washoe ROV polls! So, for anyone saying they match signatures, again, it’s as meaningful as our observation into the EMS, vote tally room!

Third, with all these fake voters and now excess ballots, the machines can flip votes and no one would be the wiser as it appears there are enough registered voters for all the fake votes they need to rig our elections!

In addition, we no longer can vote in person, with a paper ballot! We must hand over our mail-in, then use a machine!

There is no uniformity in Washoe to other Counties, but that’s for another article. Carmen and crew could literally be rigging this before our very eyes.

They already have a massive number of Democrat votes over Republicans, again this is impossible as we did a door-to-door canvass! The number of real democrats to real republicans is drastically overstated.

It’s simple, the ROV numbers are off astronomically, the level of votes coming in now appears totally artificial from either stolen, trafficked ballots or their machines! We will get to the bottom of this, and God willing the corrupt SOB’s doing this will go to prison! This is treason.

If you look at our latest ask for transparency into the data they tell us we have to wait until 7/30/22!

They have 5 days by law to get the data to us!

Do they think we’re stupid?

It would take seconds for my team to pull the data off their drives, why 2 months? What fookery are they doing to the data? 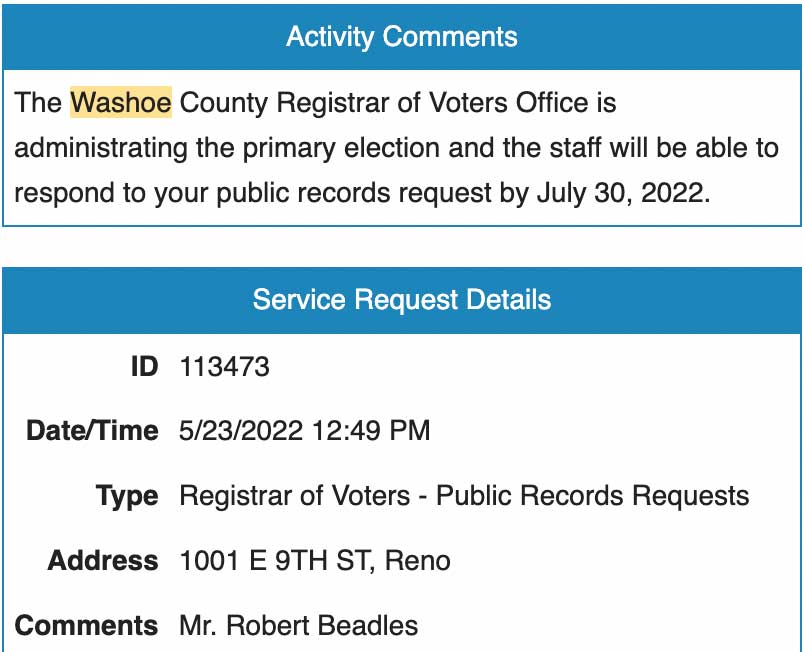 They say they are understaffed? This takes seconds to pull. In addition, if understaffed, why not use some of the over 4,000 applicants!?

The elections from 2020 we absolutely proved were rigged, it’s literally as simple as:

The football team outscores the other team in the first half and then the second half but loses the game in overtime. Not possible.

The swimmer has the fastest lap time in all four laps but loses the race.

A wrestler wins the first two falls but loses the best of the three falls contest.

Yes, they did, yes, it’s impossible, yet they expect us to believe them. To trust, not verify!

The affidavits are continuing to pour in, the evidence is mounting immensely, and the ROV in Washoe under Carmen-Rodriguez must be investigated!

You can’t have this level of incompetence AT BEST with our most scared voice, our vote!

Again, get involved people, we all must demand accountability, your family literally is counting on you to stop, stand up and SAY ENOUGH!

If you don’t, they’ll cheat, in my opinion, based on our data, affidavits, etc., they are doing it AGAIN right now!

Imagine, if they steal it from Eddie George Lorton AGAIN! We’re stuck with a broken, sanctuary city Reno! You literally couldn’t pick worse leadership than what we have in Reno or our County, and we find, they weren’t even rightfully elected!

I build businesses and solve multi-billion dollar problems, I never wanted to do this in a million years, but so many failed, this is a huge problem that affects us ALL, so I and the team stepped up and proved it all, now it’s up to you, stand up for your family, and SAY ENOUGH!