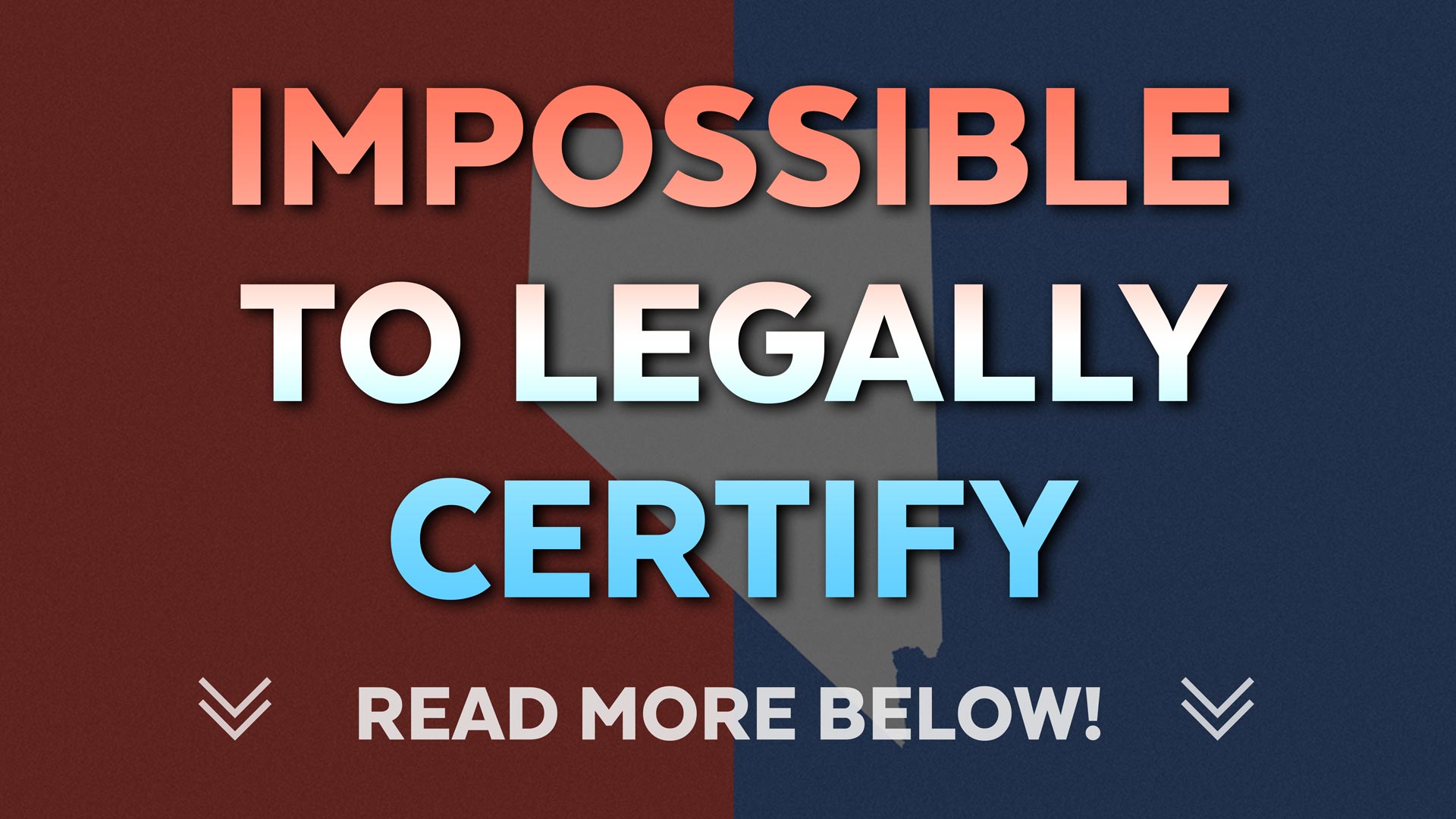 We’ve been working around the clock digging through data, working with our incredible volunteers, keeping our attorneys in the loop, and so much more……

What we’ve found is appalling!

Here are just TWO of many brief reasons why the 2022 Nevada General Election is impossible to certify.

Any state official certifying this election without thoroughly investigating the following is in breach of their oath.

Certification would potentially be a fraud against all of us legal voters who are guaranteed their vote will be legally counted, and additionally, certification would be a violation of the Constitution article 4 section 4.

Those are just two examples of many these officials face if they certify these results.

We have several workers who were tasked with signature verification who will testify in court they were instructed by key personnel at the ROV in Washoe and Clark to pass all signatures regardless of issues with them.

Signature verification is basically the main line of defense against voter fraud.

Here’s an example of how these issues are exploited in Pennsylvania:

Here’s proof they are far from adequate in Nevada from a non-election-denying journalist:

What could this mean? Tens of thousands of ballots may be legal ballots filled out and cast illegally, costing us all our voices and our vote, installing people we did not vote for!

Daily the ROV reports who voted in the 2022 General Election here:

We can see who actually cast a vote. Their name, address, party, and even their phone numbers!

Yes, their phone numbers, all of this information is public record.

So what did we do?

We have an amazing and patriotic team of incredible people who have been calling 10s of thousands of these so-called voters.

What did we find?

That’s right. They swear they DID NOT VOTE!

So we have potentially far greater than 25,000-35,000 so-called voters who had a vote cast for them, but it wasn’t them who voted!

Folks, this is insanity.

With no signature verification and now with tens of thousands of illegal votes, this election must be thrown out.

There are zero excuses now the ROV or SOS can give us to legitimize this election.

Call the so-called voters yourself, do the SOS and ROV’s job, and you’ll see we are telling the 100% truth.

We all got screwed!

These are just two of dozens of issues we have uncovered. These two alone make the election completely illegitimate, and we must have a new election.

We have sent hundreds of affidavits to the Secretary of state, ROVs, county commissioners, and their representatives. They have been made aware of these issues.

Additionally, our attorneys have notified them as well.

This election can not be trusted.

These officials have a duty to ensure our elections are legitimate.

The results are FAR from trustworthy or legitimate.

These results can not stand. I don’t care what party you’re with. You all have to know we’re all being screwed if this stands.

It’s potentially criminal for the certification to occur now, knowing what we have uncovered.

What will they do tomorrow?

Share this letter everywhere and share it with all your candidates and city, county, and state officials.

We must peacefully demand a new election!

The new election must be conducted by hand, using paper ballots, done in one day, hold the election at a convention center or similar, and use local, legal voters to conduct it under court and public supervision.

Our vote is our only voice. It must be legitimate!