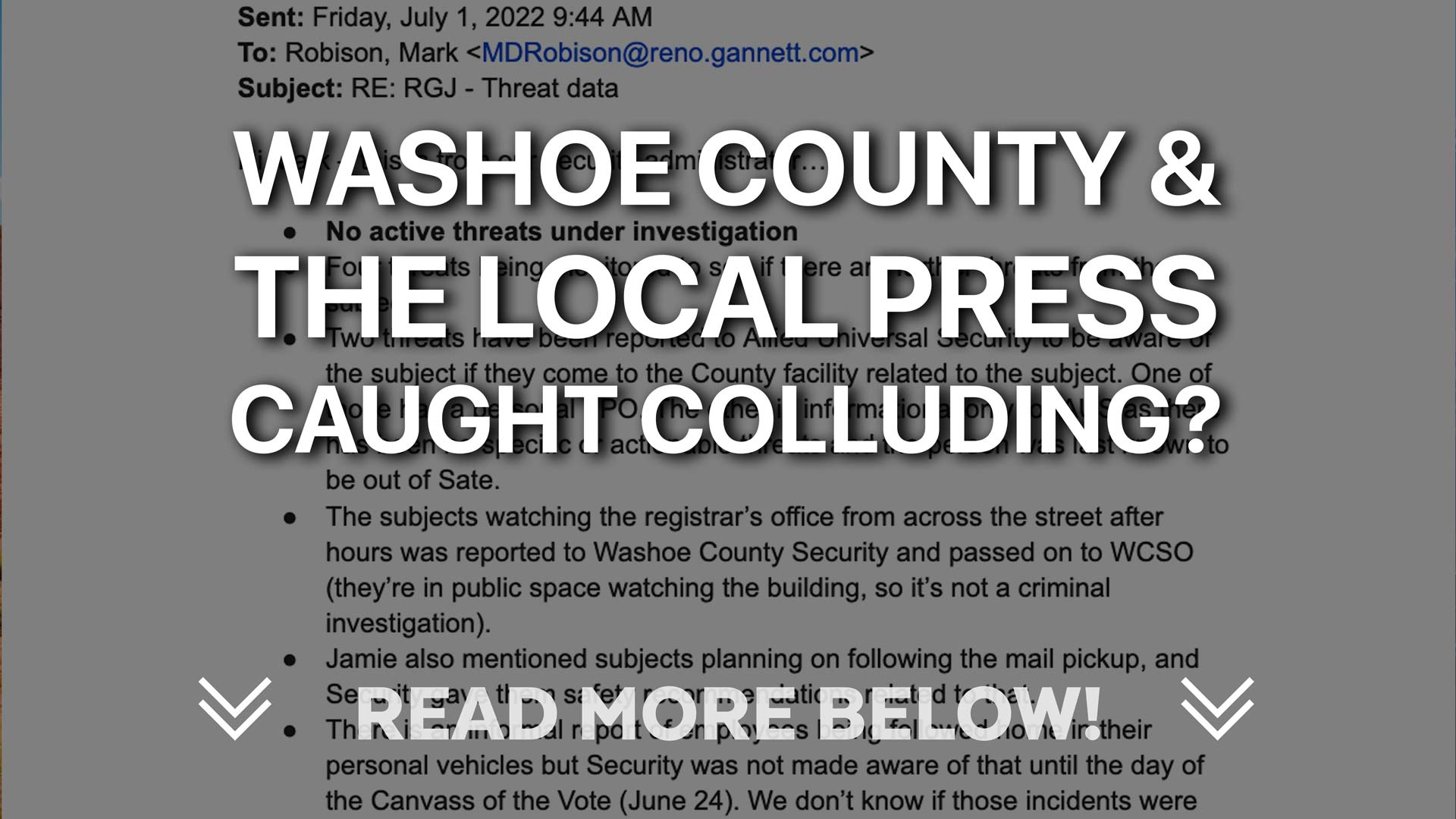 So we all heard about the so-called threats to election officials, including the MIA Spikula.

But where are the receipts?

Where is the proof there were ANY threats against them?

I went to many county commissioner meetings, and the overwhelming outcry was for Spikula and others to resign.

Because they suck at their job….

Do they call that threats?

Never once did I hear a threat against any county official.

Never once have I seen proof of a threat to any county official.

Yet the press, even locally, in Reno of all places, from the far left RGJ and even the global Reuters, says it’s so.

Where is the proof, I-We ask?

You and I obviously don’t condone violence or threats to public officials, let alone anyone.

But where are they coming up with this crap?

We simply want transparency. Instead, we get lies and crap like this below and the linked articles above.

If this was a business and these people were your employees, you’d fire them.

I know with the thousands of employees I’ve had, I would.

Don’t take it from me. Take it from the open records request that shows little to no proof of what they allege.

Rather it may show possible collusion yet again by big government and even local media?

FYI – for your call with Mark if you need it.

Hi Mark – this is from our security administrator….

Media and Communications Manager | Office of the County Manager

[NOTICE: This message originated outside of Washoe County — DO NOT CLICK on links or open attachments unless you are sure the content is safe.]

To go with the story about threats to county employees, it would be great if there’s any data to go with it, if these are tracked in any way. Few probably rise to the level of police reports, but maybe security logs some of them? (Plus there’s that previous request on death threats.) Bottom line: Data can help bolster the story, but I understand if anecdotal is all that’s available formally.

Deadline: I wouldn’t need anything until midday Tuesday when I start writing this story.

Asides from the bad grammar and typos, do you see an issue here?

What is the RGJ doing here?

What is Washoe County doing here?

Where is the proof of any threats they can give the RGJ other than some vague B.S. that may be something completely unrelated? Of course, there was no proof of even what their emails even possibly touched on.

Is this narrative collusion against We The People?

Keep us in the dark like a mushroom and feed us sh**?

I know I never get this type of support when I’m asked for an interview.

Does this look like collusion or worse to you?

What are they hiding?

The transparency in our elections?

Do people believe there aren’t issues?

How about this tiny example here of them counting all our votes in secret, against the law and court orders….

They call us crazy, but many are waking to them.

Are you waking yet?

So much more to come soon on local issues you need to know before you cast your vote.

Don’t forget though, to vote like this when you finally do:

On Election Day, fill out your mail-in ballot with a BLUE BALLPOINT PEN, and take it to the ROV at: 1001 East 9th Street.