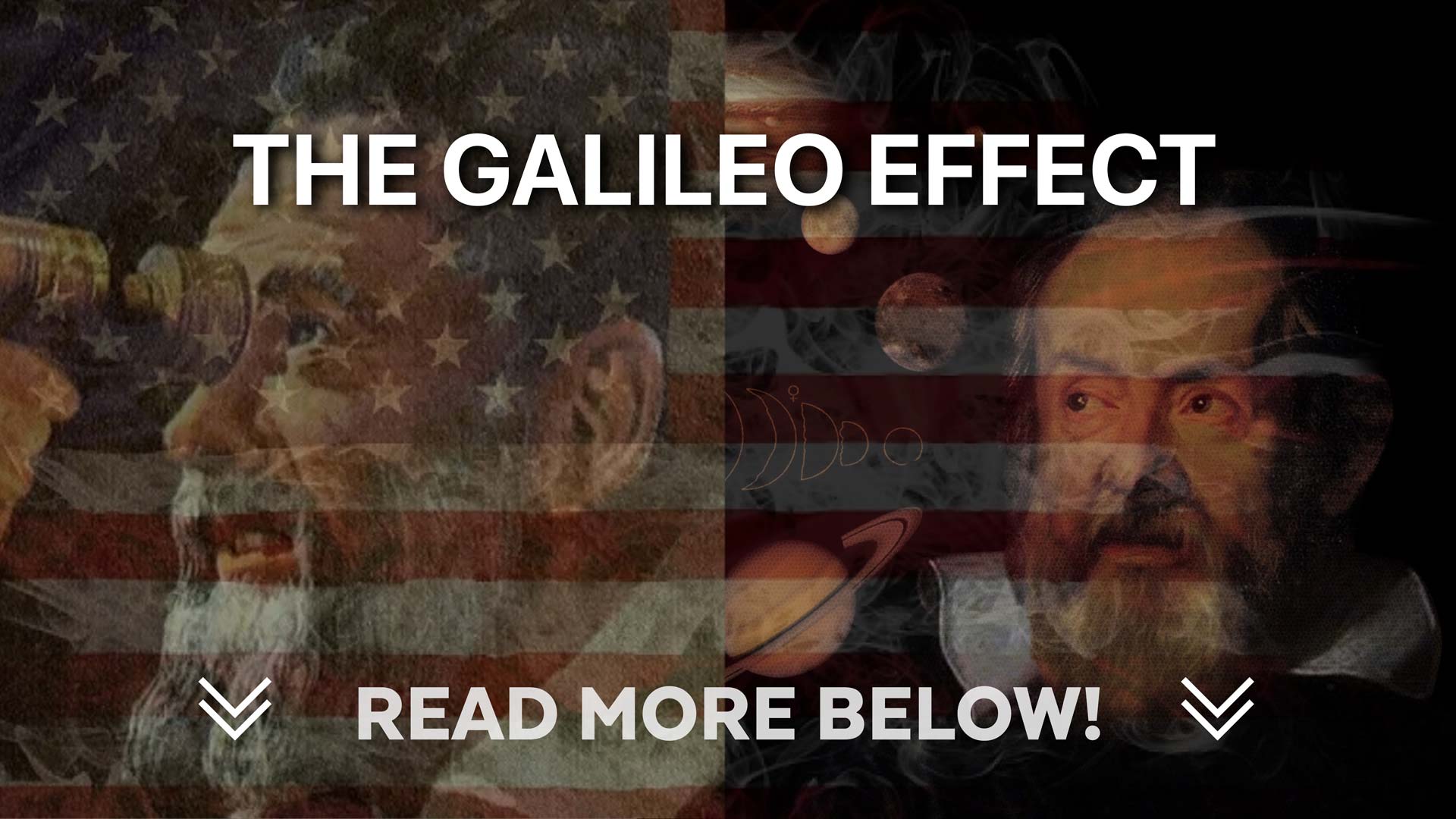 Well, there was this guy named Galileo Galilei. From 1564 to around 1642, he did his little thing called going against the entire system.

In all his early curiosity and wisdom, he discovered many things, including that the earth rotated around the sun, not the sun around the earth.

This didn’t fare so well with the church, the government, the media, and even other astronomers, engineers, and the public at the time.

The system contended the earth was the center of the universe and everything revolved around it.

Admitting the earth circled the sun would add issues to their narrative, teachings, and way of life.

So, rather than admitting he was right or even looking into it, the system fought Galileo with every weapon it had.

Yet Galileo fought back, relentlessly….…

What’s amazing about Galileo is he didn’t fight the system out of ego or for fame. Instead, he literally did it because he knew he was right, even if everyone told him he was wrong.

It’s an astonishing story of how out-of-the-box thinking disturbs people and systems from things they think they know or things they try to hide to keep their narrative, regardless of the cost to us all.

The church, the government, the media, his peers, and the people relentlessly attacked him, spread lies about him, trashed his work and name, even incarcerated him for the last 10 years of his life, and so much more.

He did eventually cave, and he did ultimately recant.

Over 300 years later, the Pope did come out and apologize, saying Galileo was right.

A lot of good that did Galileo then and now…

It’s sad. We saw Peter deny Christ three times, Galileo recant, and many give up and quit when they were right due to overwhelming pressure and fear of persecution or just public social media shaming.

We see the same from studies where even torture seldom works.

People just want the pain to stop, so they say anything to make the pain go away.

This is why it’s refreshing when we see so many of us push back and tell people, NO, you’re wrong, I’m right, and here’s why.

Those who fight with facts, not feelings, and articulate well enough for a person with an IQ over 60 to understand, will do well in this battle.

Here are a few examples of things here at home.

Eddie Lorton, or rather George “Eddie” Lorton, has been telling the truth about how bad the crime has gotten here in Reno.

Yet, the fake news media attacks him and twists his words and the facts to try to boost his opponent Hide’n Hillary Schieve.

Why would anyone defend Hide’n Hillary?

Have they looked around at the destruction she helped cause over the past 10 years here?

This little Ben Maggot, or however you say his name over at Fox, does no justice for We The People in reporting the facts or EVEN just the news.

Little Maggot has to try to make everything about a narrative for the left rather than do what’s right, which is simply tell the facts or report the news.

There were two murders just in the past few days, crickets by Maggot….

This is one small example of what Lorton faces while trying to save Reno.

She spoke out against the system, and the system locked her up.

How many MILLIONS of people have died under the government’s COVID protocols?

How many have died under Gold’s protocols?

Where is Gold’s justice? Where is ours?

We see the courageous Dr. Joseph Ladapo, the Florida State Surgeon General, stand up for us.

We see big pharma, big tech, and big government comes for him because of it.

They attack him relentlessly, censor him and try to attack him personally.

Because the State data he shows proves, the covid jab increases deaths in 18-39-year-old boys-men by 84%!

He shows the jabs are killing our young men!

This is data, not spin, not narrative, yet the trifecta of power comes at him with spin, narrative, censorship, and of course, LIES!

Big tech, big pharma, and big government are colluding together to allow us to die, at best, at worst, they want it to happen.

Murder for profits? Or depopulation?

Where is the public’s peaceful outrage?

On a smaller note, from January 2021 to NOW, the team and I asked questions and found crazy impossibilities. We brought forth the findings just to be relentlessly attacked by the system, the media, and the people, from our own & opposite parties.

They lie about us and our findings, make things up entirely, and speak in half-truths, if at all, just in the hope YOU won’t believe the truth, but rather them!

They attack us messengers, not the message. We see the machine, the system, cover for all craziness. We’re all waking up to it.

What am I talking about? Our election findings, that no media or court want to cover, let alone our local public servants…..

I sure hope it doesn’t take 300 years for us to be proven right.

We can prove it now. We just need YOU to say enough.

Remember, we are the majority, stop worrying and speak the truth. If you and 10% do, this all ends. Remember that.

Will you cave like Peter, or will you say enough?

Let’s hope it’s not the Galileo effect, and it takes 300 years for us to finally be vindicated….

We can end this tomorrow if 10% say enough.

Spread the word, don’t be afraid to show up, speak up and say enough.

Can you imagine if just 10% of us showed up to every capitol and said, you’re all fired……