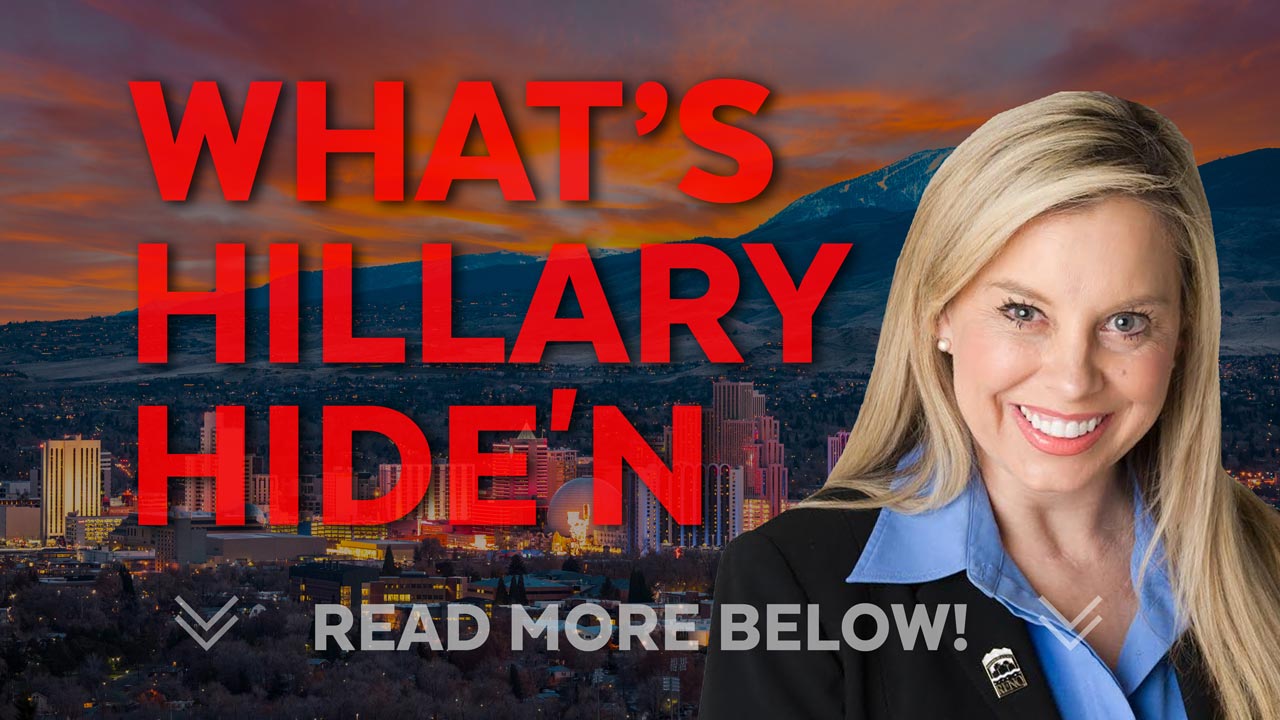 It’s like a buffet in Washoe, there is so much to choose from when it comes to shining the sunlight on politicians, policies, etc.

Reno was basically built by Nick Abelman, Bill Graham, Jim McKay, and George Wingfield, who took over businesses, then politics, and of course, politicians. The more things and names change, the more they stay the same.

We’ll be shedding some sunlight on these similarities soon, it’s crazy what groups, people, etc. that back rotten politicians or wannabe politicians all for their piece of this and that, at our expense.

Stay tuned for this…

In the meantime, let’s talk about Hide’n Hillary Schieve, Reno’s infamous mayor. I’m sure we’ve all heard the stories about her. Some of these stories can be proved with witnesses, some with photos and videos, some with documents, and of course, some can not be verified.

We’ve seen her support disappear in droves, and it’s only getting worse. The company she keeps taking money from, then deletes are making noise. It’s quite interesting.

We see her running again for mayor, which many believe violates the term limits.

Why enter a political race if it may not be legal?

Or even if it is, the appearance to all shows something we’ve all seen too many times. These politicians get in and just don’t want to leave, even if they are total failures!

Well… she doesn’t seem to care. It appears she likes the money and perceived power it gives her over us.

We’ve seen over the past 10 years or so of Hillary being in office that our great City has turned into a total crap hole.

Our law enforcement is handicapped, homelessness exploding, out-of-control spending, ridiculous policies are brought in, special interests are getting rich, special deals are being cut, no real access to audit the tax dollars being set fire to, and so much more.

Reno is now the most dangerous city in Nevada. Its violent crime is 45% ABOVE the national average!

For example, do you like what you see downtown? Would you take a stroll from casino to casino, stepping over the human feces, homeless sleeping, and put your life in danger of being robbed or worse? It’s an easy fix, so why hasn’t Hillary done anything about it?

Both can be fired, both are usually beholden to the city council or mayor.

Both I believe should be elected by We The People, not appointed by bureaucrats.

Speaking of appointees, Neoma Jardon is stepping down from the city council, and instead of simply adding the vacancy to the general election in November, they’ve once again decided to appoint someone.

Usually, when someone is appointed, they appear to be an insider, a yes man, who will do what the mayor or council wants. This person is given the gift of incumbency, and it makes it difficult to remove them via the next scheduled election due to the office they were given and the name recognition they receive from it.

We are told there are three potential candidates, Kathleen Taylor, Elliot Malin, and Alexander Goff, to fill Neoma Jardon’s council seat. Is it a coincidence that 2 of the three have given money to the Democrat party, candidates, or Hillary Schieve’s campaign?

Why is OUR third candidate a lobbyist?

“Malin is a lobbyist who runs Alpine Strategies and represents the Anti-Defamation League of Nevada. Until 2022, he was also a partner with Capitol Partners Nevada and deputy and policy director with Nevada Petroleum Marketers and Convenience Store Association.

He serves on the boards of or as a member for several local associations, including the Anti-Defamation League of Nevada, Jewish Nevada, Temple Emanu-El, Alpha Epsilon Pi, Nevada, Reno Masonic Lodge 13 and Hillel of Northern Nevada”

There are some very eligible, non-bureaucratic people who were tossed aside for this now “appointee” role, and instead, we see these three are now the only three they will choose from.

Here are even more “Red Flags” reported on these three choices.

Where in the hell is our say in who represents us?

Why were so many incredible candidates tossed aside? What was their vetting process? Where is the transparency? Why are two of the three people Democrat donors and one a lobbyist? I thought it was non-partisan? If the potentially more qualified candidates had given money to Schieve or Dems or had political connections, would they be in the running?

Schieve’s support has turned into disdain. The people are not happy, many of her big supporters are fleeing, and droves of Democrats are fleeing her too, now voting for George “Eddie” Lorton.

Well…. Lorton has been helping the city, and its residents for decades. A successful business owner, employer, and advocate for We The People, he’s great for US all.

Under Lorton, this mess will be cleaned up, and the best part is, asides from the safety it brings us all, he’s great for businesses, law enforcement, and We The People!

Lorton is the change most everyone now sees we must have. It’s time to clean this mess up, enough is enough.

Schieve is either purposely destroying our city or is too incompetent to run it, there is no in-between. She has to go.

Is this why Hillary’s Hide’n?

We got our hands on an email exchange from Mark Robison, the donor-driven so-called reporter for the RGJ. Have we ever seen where the donations for his work come from?

I digress. In this email, it states, and I quote:

“KOLO TV and the RGJ would like to invite you to a debate with your opponent in the Reno mayor’s race.

It would be an hour long and hosted at the University of Nevada, Reno in front of an audience of students and the general public with additional organizational help from the League of Women Voters”

Lorton responds with and I quote:

“Love to do it thanks for the opportunity. I think the people deserve to hear where we stand on policies and issues. It needs to be before early voting starts the sooner the better. Thanks again
George “Eddie” Lorton for Reno Mayor.”

Robison responds back with:

Got it. I’ll let you know when/what I hear from Hillary. 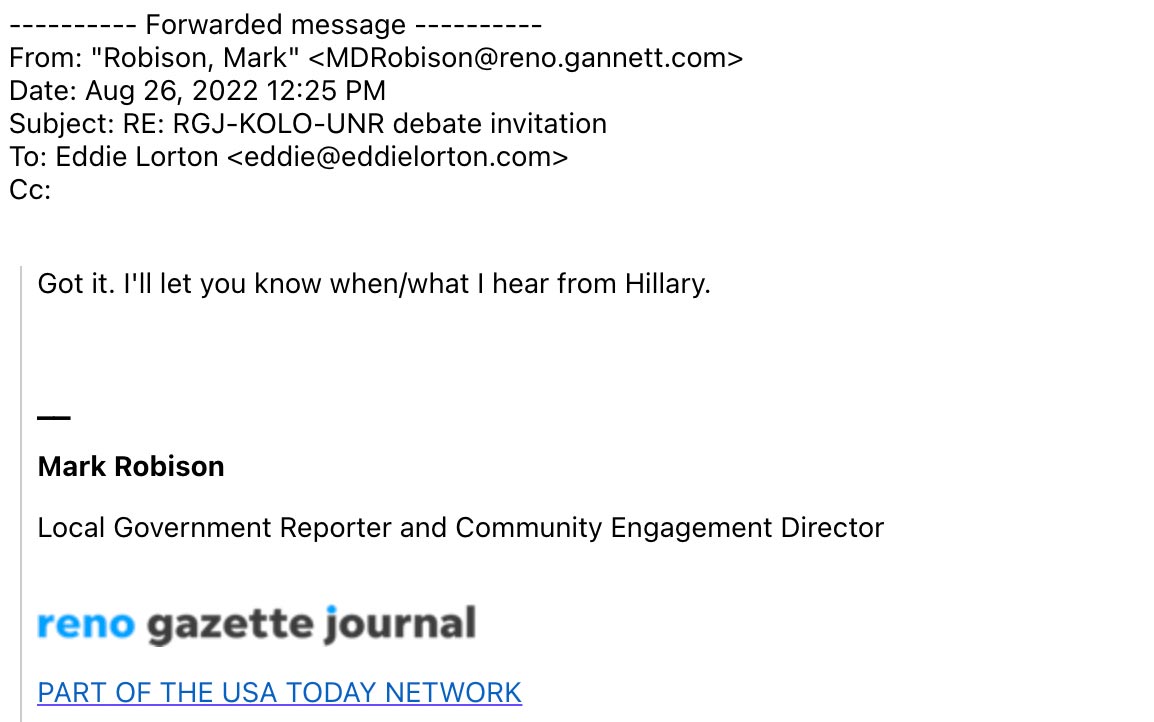 Now we are told it’s been canceled!

We’re told Hillary said she already agreed to do a debate in the studio, some very small studio, that will be prerecorded. This studio, we’re told, has a tiny audience. We’re told they typically edit their videos, interviews, or debates. Would we ever get the full debate?
Who would moderate the debate? How would they distribute it to 20,000 people?

I think we all know.

But the big question is, why are KOLO and the RGJ not at least giving Lorton the air time? Or hold the event and hold Lorton’s feet to the fire and give the people a chance to see the man who may just well save our city?

Why did they cancel it?

Why are they not stepping up to make this happen or at least cover Lorton?

Hide’n Hillary’s lack of appearance would speak plenty to Reno’s residents and voters!

Why are they letting We The People and their so-called consumers of media down?

I recommend you all ask!

You might also want to ask where real journalism went and why their numbers have plummeted.

You will see media companies who simply report the news and give candidates and stories a fair shake are exploding in numbers like the Nevada Globe and others.

I recommend you all ask what Hillary’s hiding and why the media just canceled OUR chance to see these two give us insight into who they are and what they would do for US and our now crap hole city that Hide’n Hillary built us!

How in the world is Lyngar running for office? How in the world are so many professional people and organizations supporting him with money, signs, and endorsements?
Don’t worry there’s far more to come soon!