Have you figured it out yet? 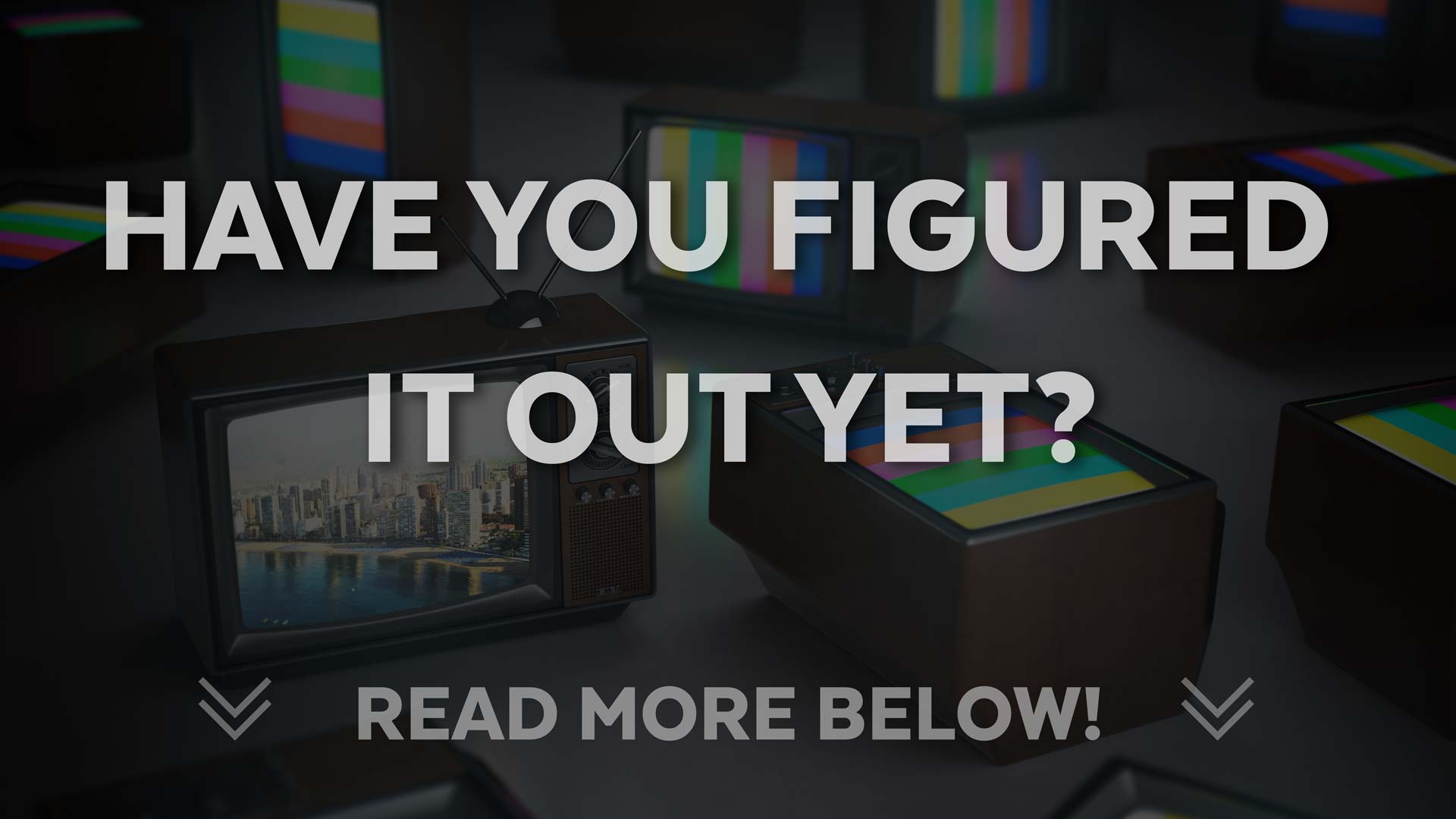 It’s quite funny, really, as sad as it is…

Let’s play Beadles-libs instead of Ad-Libs…

Take me, for instance; I’m just like you (well, most of you). I just want to live my life, not have it stolen from me.

Yet we had 250,000 subscribers on youtube before they deleted us for talking about election issues. This was just a channel for me and my son and family to give back and have some fun (I’d show you the analytics, but Youtube deleted us, as did Wikipedia, Twitter, Linkedin, as did Facebook to various degrees).

Look at the RGJ youtube channel or their readership… dismal and dying.

Our little blog here by the people for the people, Operationsunlight.com, is now reaching more people than the RGJ and similar propaganda sites by many metrics. It’s similar to the Stockton Record, which has all but imploded… Same basic owners and type of propaganda content btw as RGJ, and they both went or will go under. 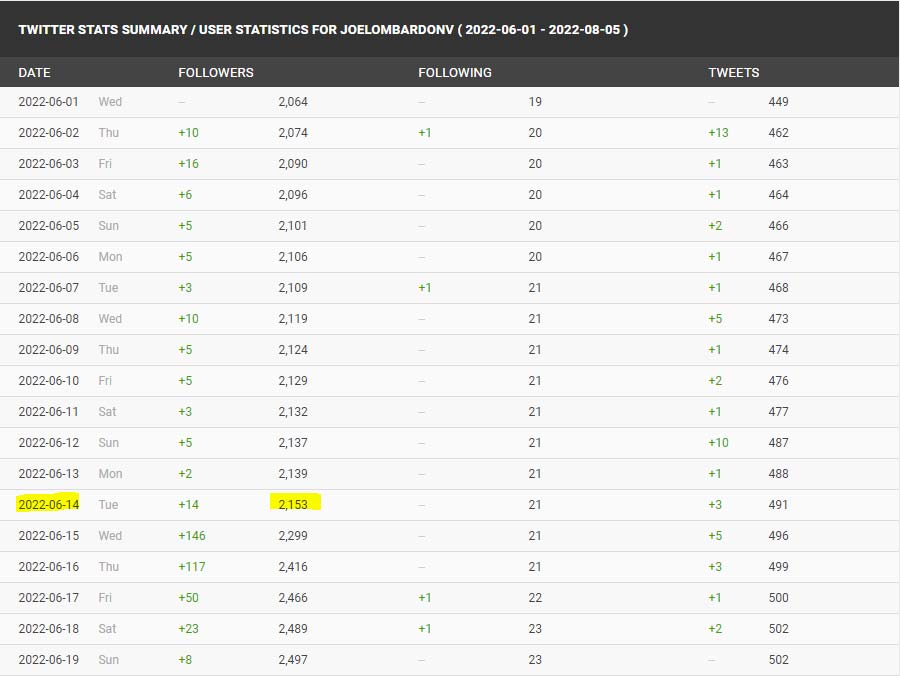 Joey Gilbert, the people’s champ and the rightful winner, has 34,000 twatter followers just on twatter alone! 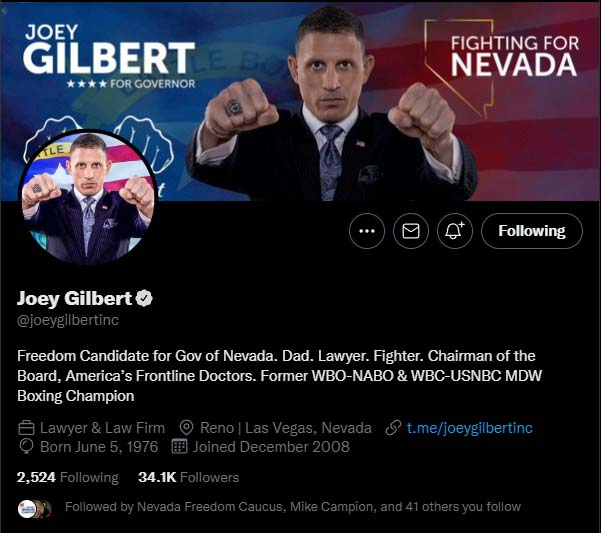 This doesn’t pass the smell test.

No Show Joe is hated by most, Gilbert, loved by most. This simple social proof shows a probable cause for what we’re thinking… he didn’t win. However, the algorithm used against Gilbert for Lombardo, according to 4 experts who came forward, proves it, not just thinks it!!!

Look at Mr. Donation Robot Robison with the RGJ; he has like 400 twatter followers and struggles to get a dozen twatter likes, yet is the leading paid-for by donations reporter for the RGJ? 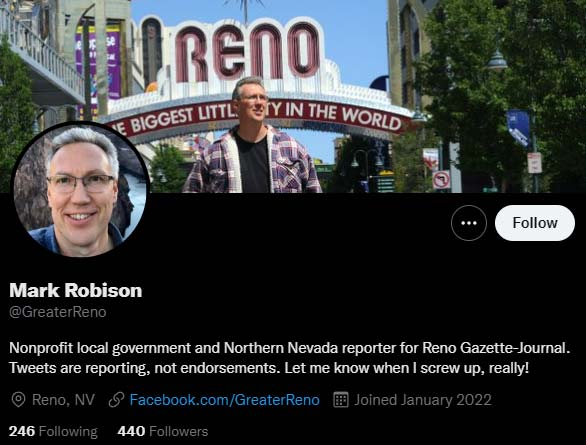 Here’s me on an obscure platform for truth called GAB. 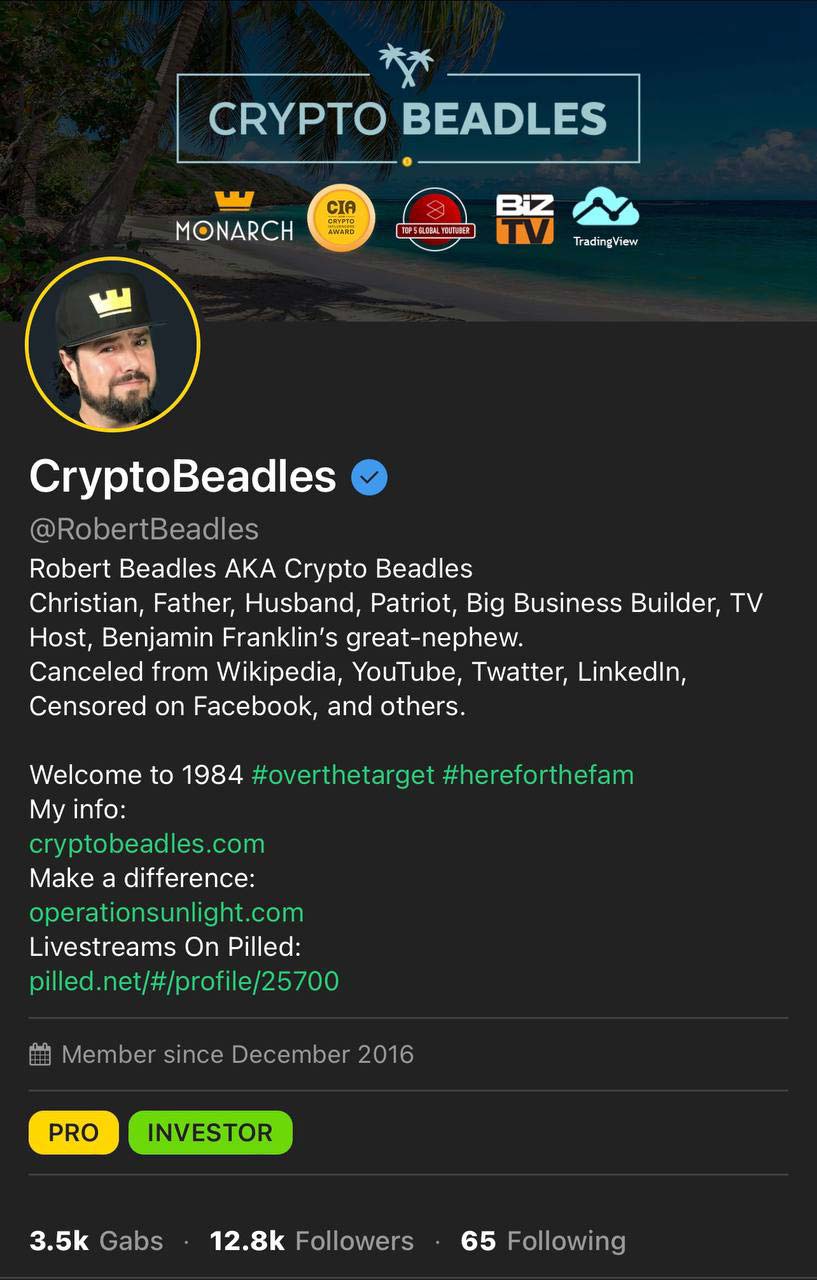 Here’s my reach vs Robison’s reach…

His research into our expenditures to save our state is laughable at best as well. He’s off by sooooo much. He says we spent nearly $500,000.

He seriously can’t even do simple math or research into what we put into just one quarter here in Nevada to make sure your vote counts as correctly as possible by constitutional candidates regardless of what party you belong to.

God has truly blessed us; it’s not bragging by laughing about the decimals he’s off by; it’s sad.

It’s also sad Robotson keeps saying, like many other so-called reporters, my wife, family, and self are not Nevadans. We’re supposedly California transplants here to take over your politics…

My wife and I were married here in 1995 and started our life and investments here then.

We have zero interest in becoming politicians or political figures. These so-called reporters are trying to make us so. Know, we don’t want any of it; we just want to make SURE your vote counts the way you wanted it to!

We truly don’t have real investigative reporters by the so-called mainstream media in Nevada anymore; they are simply paid to write, paid to play, types.

Thank God for those out there who fight against the google algorithms to bring us the unbiased truth! There are several, we’ll start promoting them all soon, so these fake news sites go where they belong… bird cage crap paper.

Know, we probably wouldn’t have these issues if our politicians were legit and our votes counted legit.

Know, people are waking to this; people are realizing politics and media are in bed together, and neither is what the people want.

It’s not fun for me to point this out. It’s sad, and it shows you straight via social proof who wants what.

Never in a million years did I plan on being the guy who builds multiple billion dollar businesses, additionally solving multi-billion dollar issues for others, to then having to try to wake people up with what’s being stolen from them… their voice and their vote by both the media and so-called elected servants!

Do you think they are serving you?

But a few are!

THEY ARE AND WILL BE SHOWN AS OUR HEROES!

The others, for what they are, are sellouts.

It’s all my wife’s fault, though. Lol, she said I had to show you vs tell you.

She regrets it now for sure lmao.

We had an incredible life, and of course, we still do, but man, I miss our beach and our plane and boat rides all over the world. But know, we’re here to see this through. My great Uncle Ben Franklin left us this country; it’s up to us to keep it.

But again… I digress…

Remind me again how a guy like Joe Lombardo, who can’t go out without being heckled, can’t draw flies to a fundraiser—even with Don Jr.—versus the people’s champ Joey Gilbert who spoke everywhere to everyone and oh yea, had 55,000 votes taken from him in Clark County alone. 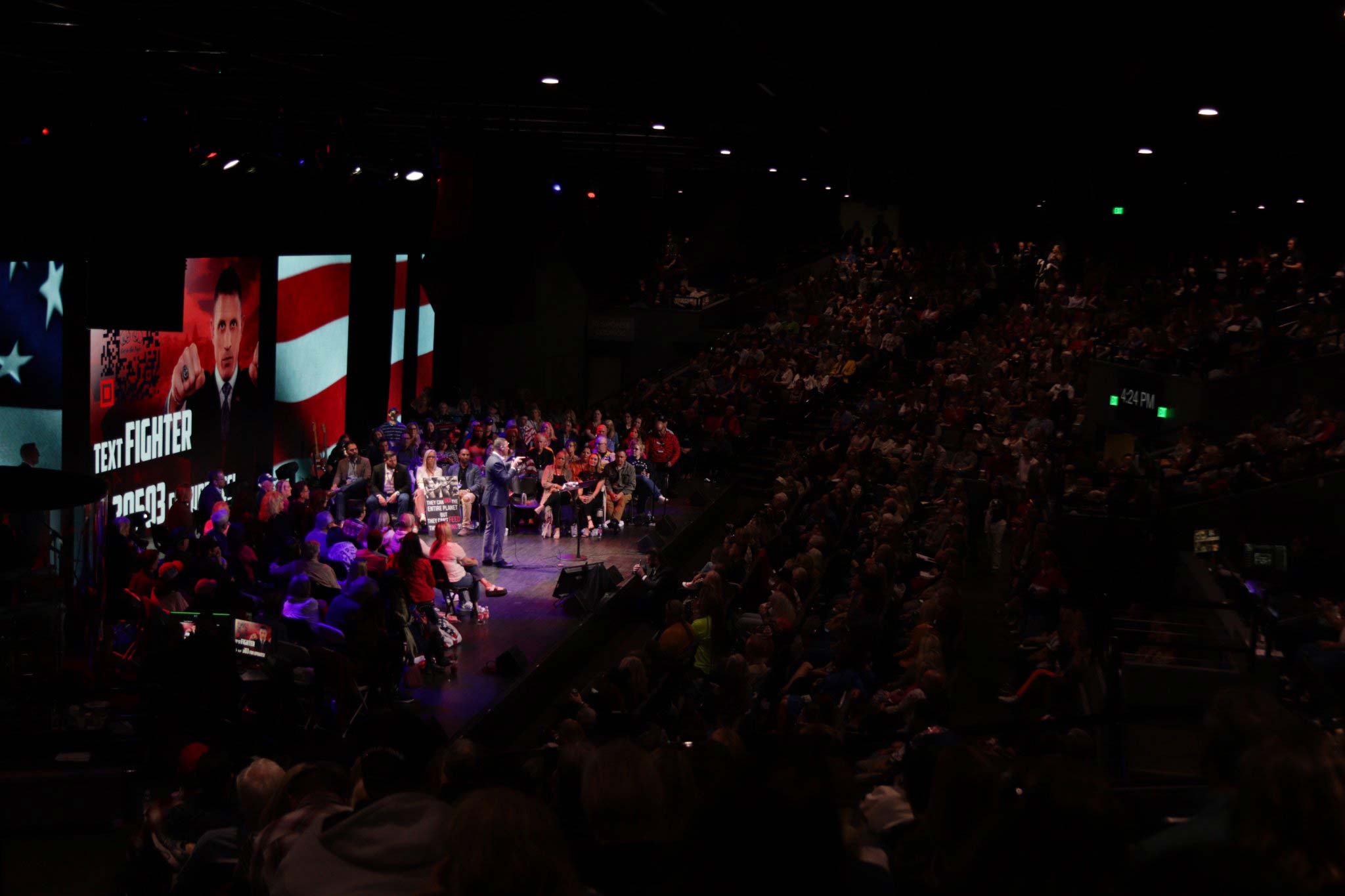 If Joey gets his day in court with Judge Wilson, and Judge Wilson simply fears God, weighs the undeniable evidence, and does his job, he’ll become the most loved Judge across the country, nay, the world.

83% of all Americans believe we have election issues!

We prove they are right to believe that!

The so-called experts on Lombardo’s team do everything they can to stay away from the math and geometry, obscure it, hope the judge doesn’t understand how wrong they are, and then hope Wilson rules AGAINST all Americans!

It’s sad where America has landed. It’s all our fault. We weren’t involved enough, didn’t speak out enough, and didn’t show up enough.

Now we can, and now we must, we must peacefully say enough. If you don’t, then complain no more!

In Joey’s contest, it’s proven there is an algorithm in place deciding who wins, not We The People by our votes…

Well, this algorithm does it.

Literally only knowing two numbers in a three-number code, it fills in the blank with the winning number every single time without fail! Almost always for the other guy vs We The People’s guy…

We can prove it.

What can Lombardo’s experts say in his defense?

They stay away from the math-geometry, obscure it, try to rest on their laurels of so-called “expertness,” and hope the judge buys their BS.

Say some prayers for Judge Wilson to do what’s right, not what’s easy, to remember God will hold him accountable, and if he simply does what’s right and what he swore at least two oaths to, he’ll be the most loved judge in the land.

If Joey was a penny short or a second late, they would have chucked his contest out the window.

How can we be where we are now without a hearing scheduled? Where is the rule of law?

Will Judge Wilson deny Gilbert his day in court?

We’re hearing he’s faltering and doing all he can to keep Gilbert and experts from their day in court. They show us so many cases he let us down on that he’ll one day have to answer to God for. Will he now do what’s right by God or us?

We hear he’s wanting to punt this to the supreme court, where they can punt it to someone else.

We hope they are wrong; we hope the Judge will do what’s right by God and We The People, not what’s easy.

We know God knows what’s up. Pray for Judge Wilson.

For the 17% who say there’s no “proof of election irregularities-fraud,” explain to us then how in Washoe County alone they had no registrar of voters, no one qualified to count the votes.

The Secretary of State certified it…

Share fricking everywhere! Anyone with a 2nd-grade education should now understand what we’re up against!