The Media Got it Wrong Again

Every day I find out something new about myself. My wife, kids, myself, and true friends laugh at the lies they say about me. Unfortunately, it seems when you expose election fraud, you become a target from both Republicans and Democrats, but none worse than the media.

In a recent article, Mark Robison states we lost our Observation in the 2022 primary elections case. To his credit, on the surface, it appears true.

But remember, there are always two sides to a coin and a story.

He covered one side. At best, he also misspoke when he said the defendants or I wasn’t available for comment; we all were.

None of us were approached by him or contacted, but I digress.

Now I build businesses and solve problems for a living. I’m an inventor as well, also the great-nephew of Ben Franklin. Why does this matter? It’s not to boast; it’s to share what we did.

We knew it would be challenging to win a restraining order against the entire Washoe and Clark election process. Still, we filed them anyways—as we know there are grave problems with our elections and who knows, maybe the judge would agree our elections are super important for ALL legal voters!

Second, we asked for the sky, the stars, and the moon in our lawsuit for meaningful observation.

This, too, we felt would be very challenging if the judge didn’t hear us out. We didn’t share all the affidavits, proof of rigging, etc.; we just asked for real observation into the election process for ALL legal voters.

The proof of rigging, affidavits, etc., is for another case!

What did we really want in this lawsuit? Well, we got it!

See the screenshots from the COURT ORDERS! 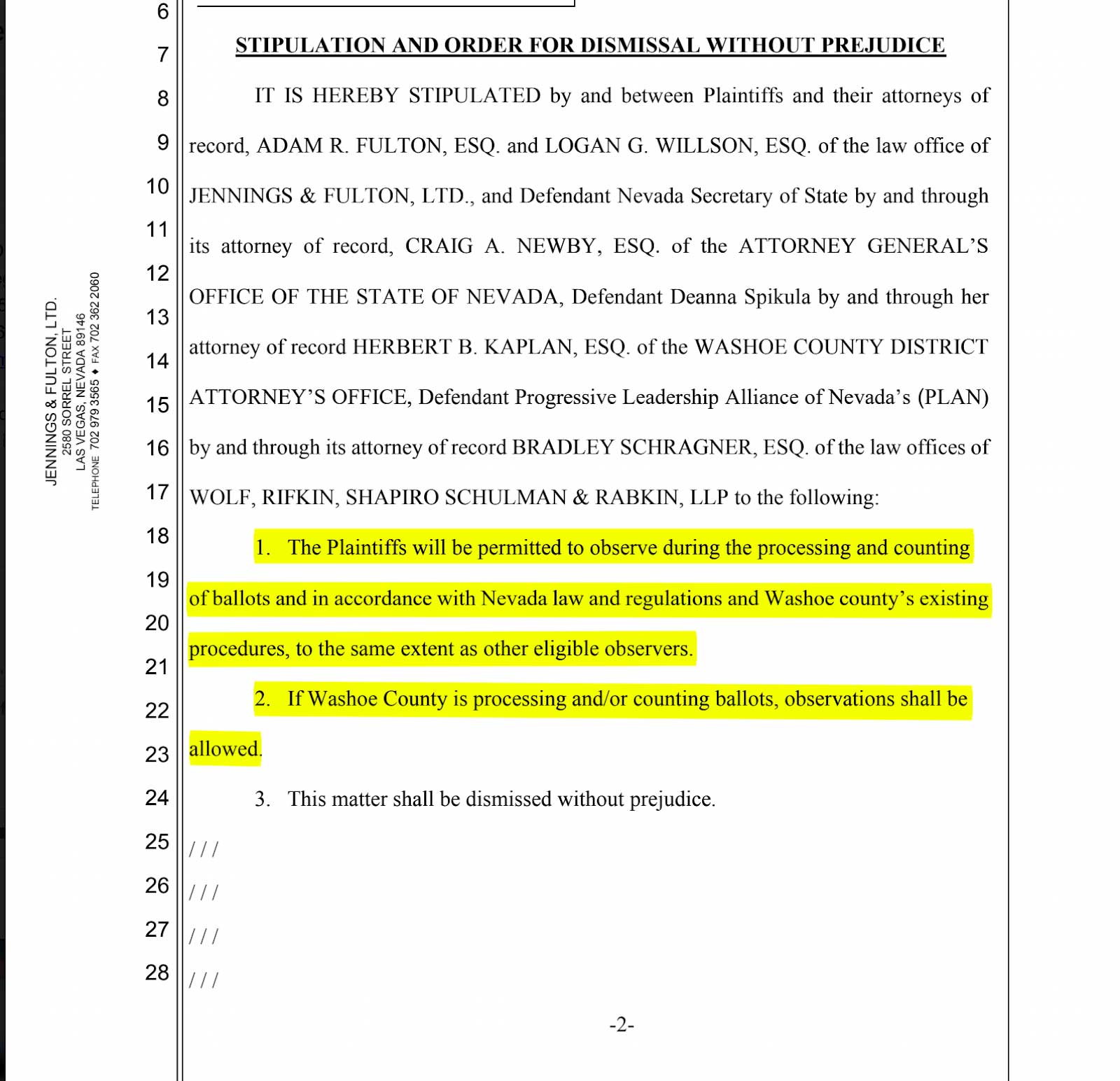 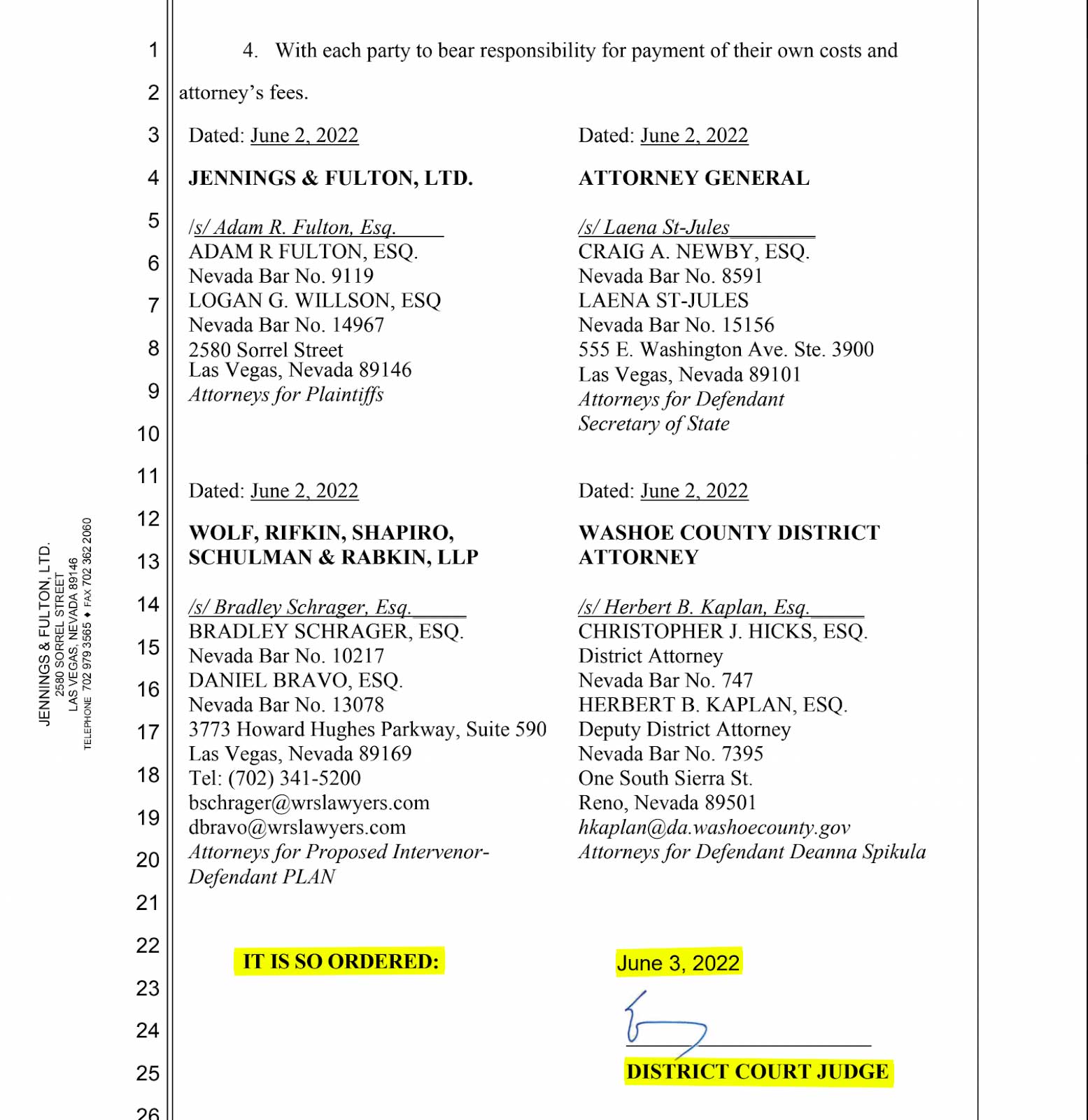 What do you see here?

We ALL now can be present now through the entire election process!

Do you remember the 2020 elections in Washoe? We couldn’t be present through the whole process! They booted us out for 10 days in Clark and hours in Washoe!

We NOW, literally, have a court order guaranteeing our presence throughout the entire election process whenever the ROV is working! So if they boot us out or work without us being present, they violate a court order!

How is that a loss?

In 2020 they booted us out and worked in secret. Now they can’t without violating a court order!

It doesn’t solve the issues with machines or AB321, but it makes it much harder for them to cheat, and it allows ALL observers access to the process!

This is already paying dividends in our Clark County lawsuit, many issues have been remedied and many issues fixed simply because we got these court orders!

Remind me again how this is a loss?

It was for meaningful observation, that’s all. The other issues are being filed in different lawsuits.

Stay tuned on those as well.

As to the media, with Mark Robison of the RGJ, he reported my team and I were wrong about the 40k missing voters, yet I spent over an hour on the phone with him after the article went live, showing him in crayon how we’re right. So where’s the retraction or at least the article to combat the previous?

I may have to sue him personally and the paper too soon for you to hear the other side of his misreporting as well or at least they are misreporting.

It’s a shame, he seems like a good guy, and I’d love to be wrong about him, I’d even publicly apologize to him and promote him if he simply did the right thing, but he and currently many others are not reporting both sides objectively.

It’s hard to say if they are simply doing as told, or their editors change the story, or they simply don’t understand, or they get handcuffed by their bosses, or they’re simply corrupt, writing for a paycheck.

Regardless, it’s hurting the people.

It truly appears there is a bias from the start to follow the official Secretary of States’ BS talking points, stating there is no evidence of election fraud in 2020. Yet neither will cover or take our $30,000 challenge.

Hopefully, Mark will do the right thing, cover both sides fairly, and report the facts.

By the way, since when did the RGJ become fact-checkers into quantum computing and algorithms? I’m told there’s only a handful of people capable of doing it at these levels, and 2 are on our team, yet some reporter says these mathematical geniuses are wrong!

What an upside-down world we live in.

You’re smarter than that. I urge you not to believe me as well, just take the challenge and look at the county’s own data, then be faced with the following:

The football team outscores the other team in the first half and then the second half but loses the game in overtime. Not possible.

The swimmer has the fastest lap time in all four laps but loses the race.

A wrestler wins the first two falls but loses the best of the three falls contest.

It’s literally all of Washoe and Clark County precincts, ALL, every single one voting identically!

Yes, they did, yes, it’s impossible, yet they expect us to believe them. To trust, not verify!

Take the challenge, and I challenge Mark to cover the $30,000 challenge as well and cover the truth about the missing 40,000 voters and their potential votes.

Enough is enough—tell the whole truth—the majority of US no longer trusts the media anymore.