Did they dupe you too? 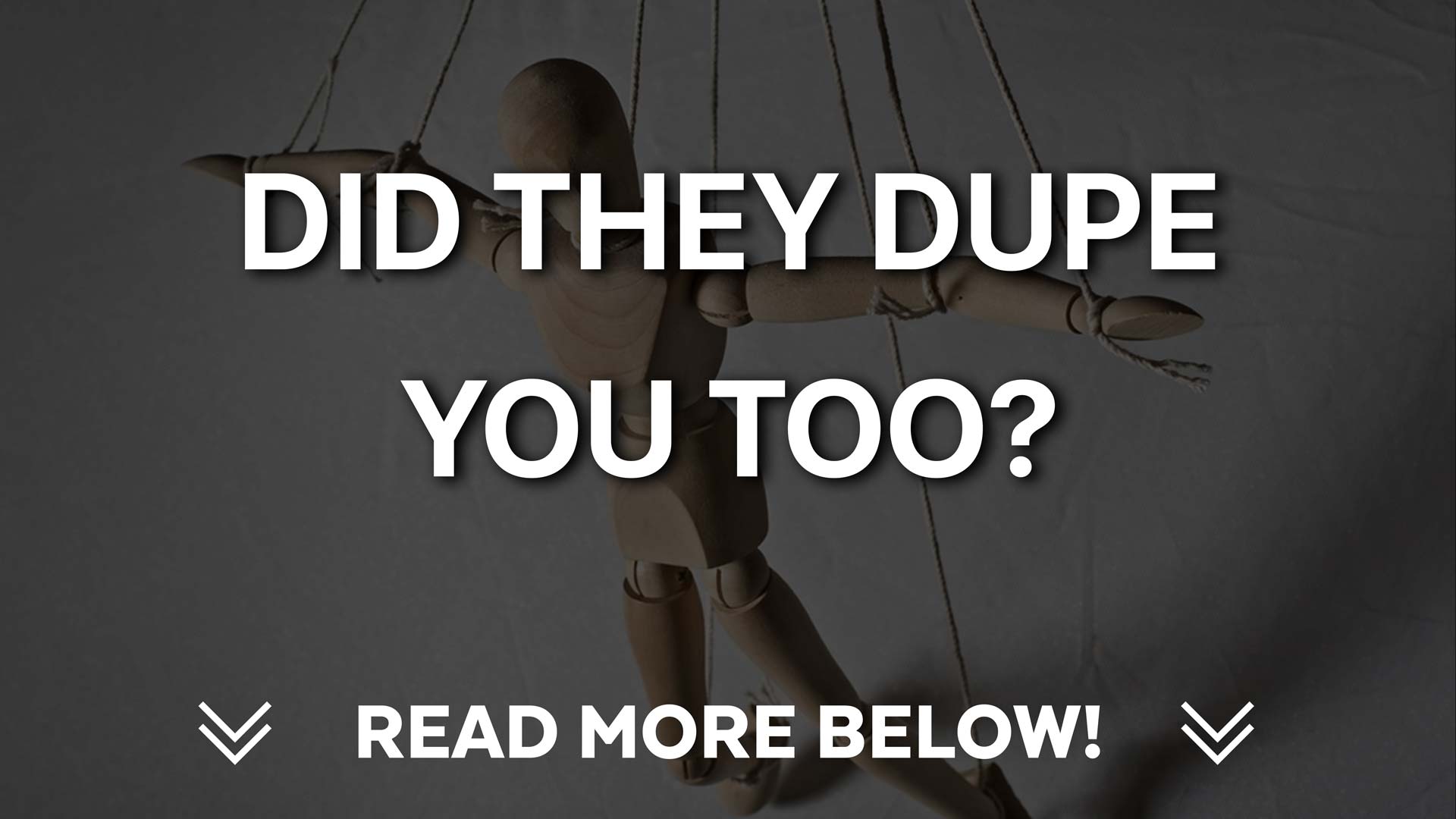 Were YOU Duped too?

It is said, possibly by Mark Twain, that it is easier to fool someone than to convince them they have been fooled. Have you experienced this in your life? Perhaps you know something to be 100% true, something you have all the facts and proof for, but the person just wouldn’t listen or see the truth no matter what you showed or told them.

This phenomenon is known as cognitive bias, among other things. A cognitive bias refers to the systematic patterns of deviation from norm or rationality in judgment, whereby inferences about other people and situations may be drawn in an illogical fashion. These biases are a result of the brain’s attempt to simplify information processing. Cognitive biases can lead to perceptual distortion, inaccurate judgment, illogical interpretation, or what is broadly called irrationality. Some common examples of cognitive biases include confirmation bias, the halo effect, and the sunk cost fallacy.

Now, imagine a small group of bad actors who want to affect the minds or feelings of a group of people or the masses. What if they controlled the media, the government, the corporations, and the education system at a massive level?

Former KGB spy, Yuri Bezmenoff, explains how this happens in four steps. He says that when their acts of subversion are successful, there is next to no amount of truth or facts you can show some people as they have been programmed to believe whatever they want. Once programmed, it’s very difficult to convince these people they have been duped.

This is a must-watch interview. Take the time. It’s as relevant today as it was then. You can see it all come to fruition with Russia, China, the US, and so many more.

It’s a truly revealing interview between the incredible G. Edward Griffin and Yuri Bezmenoff that touches on so much that it could easily be a book on how to deceive a group, movement, nation, or world. You have to see what they do to us so you and others wake up more to it!

Now we can keep beating the drum, showing facts, proof, etc., but some are just too dumb or too programmed to see it. We can’t save them all, but we can save some. Knowing why this happens is key to affecting change. We must know how these groups and people affect the masses so we don’t fall victim to it ourselves and can save those who can be saved.

Take elections here in the US, for example. If we didn’t have such an incredible team, weren’t able to read the lines of code, involved in the audits, the canvassing, the ability to see the algorithm’s effect on elections, the mathematical impossibilities, the whistleblower’s own testimony directly to me and our team, I’d think we’re nuts too.

Meaning much of the media, government, corporations, etc., mock people like us who say the elections are rigged. They are convincing if you’re not paying attention or if you haven’t seen the proof. I get why so many people were hesitant to think there are issues as to why the elections are rigged. Fast forward to today, most know or believe they are. Why? They are seeing the truth, the proof, the coverups, and the decline of our once great country.

There are still some, though, that are completely sure the elections are 100% legitimate. Most of these people are beyond saving no matter what we show them. Remember what Yuri from the KGB said in the interview, no amount of facts we shower upon these people will wake them up to them being deceived. It goes back to what Mark Twain said. It’s easier to fool someone than to convince them they have been fooled.

Where do you fall in this equation? Does it take an act of God to change your mind or do you keep an open mind?

Myself, I always keep an open mind in almost everything. However, once I’ve actually seen behind the curtain, I’ve seen the levers being pulled by certain people. In certain ways, it would be impossible for someone to convince me otherwise, especially if they are just acting or speaking based on emotions rather than facts.

It’s a tricky situation, isn’t it? On one hand, it is important to maintain an open mind and consider all perspectives. On the other hand, when the truth is revealed, there is no denying it and changing your mind simply because of being called names or facing criticism.

We must all stand our ground at times but do our best to keep an open mind when we are not 100% certain of something. We should strive not to become the punchline of a Yuri or Twain joke.

Like Solomon stated in Proverbs 18:17, “The first to speak in court sounds right—until the cross-examination begins.”

Yes, the elections are 100% rigged. Take the $80,000 in undefeated challenges here, bring your best and brightest, and when they fail, maybe the handful of nonbelievers here will believe. But probably not, right? They are the ones Yuri and Twain warned us about, the dupes or the deceivers.

“They” should definitely listen to Yuri 56:50 minutes in…..their days are numbered if they actually “win.” It’s simply just a different field, the same game, wake, or they will be a useful idiot.