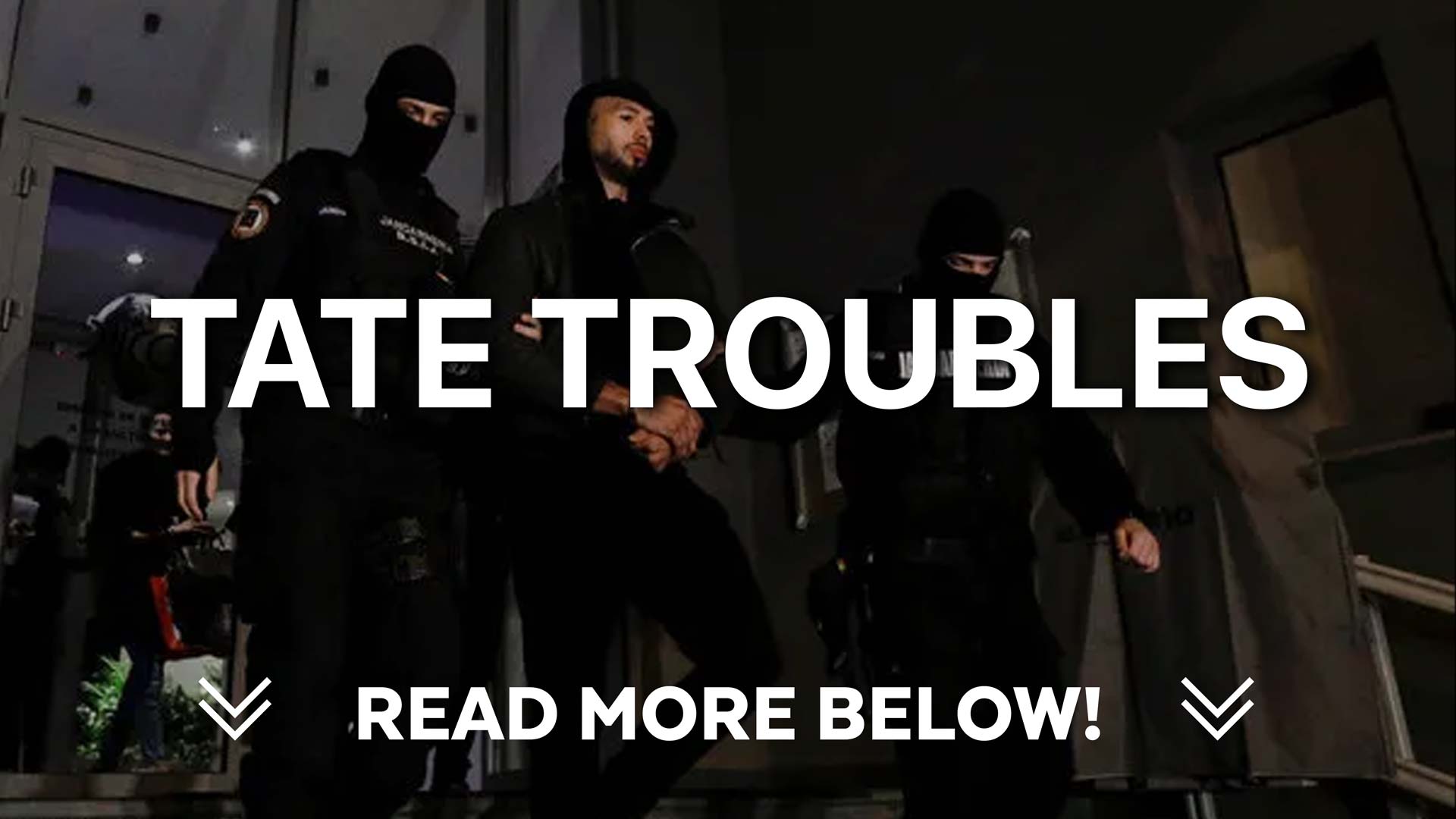 Are you familiar with Andrew Tate?

He’s the guy you can’t NOT see if you’re on social media.

He was banned from almost all social media platforms but somehow became more famous after he was banned than when he was actually posting on the sites.

He became so famous after he was canceled and banned that he became the most googled man in the history of the internet.

Somehow he claims to have figured out the social media algorithms and beat them at their own games.

Social media accounts across the globe were-are spreading his content across their channels, and he has more visibility now than he ever did prior to being banned.

So he’s back, well kind of. He was just arrested in Romania and has been detained for possibly 30 days.

I don’t want to rehash what all the propaganda papers say about him or have accused him of, as you can quickly find their accusations, etc., as soon as you type in his name.

Let’s just say the press has been the furthest from kind to him and what they and others accuse him of is far from pretty.

Over the past year, he’s popped up more than once on my phone, and he spoke a ton of truth. He also speaks about some highly controversial things when it comes to women, as you can easily find.

Andrew has preached how the “Matrix” is a big brother, big corporation system that is trying to enslave us all. That we critical thinkers are trying to escape this Orwellian nightmare the Matrix has in store for us. He speaks out against vaccines, lockdowns, stolen elections, failed education systems, men being turned into women, self-censorship, and so much more.

The “Matrix” took down his businesses, websites, social media presence, and more for him just to rise back even stronger than before. He said this made the “Matrix” angry, and it will not stop until it takes him out.

He says the way it works is once you become a threat to the Matrix, once you start gathering a following and have a loud enough voice, the Matrix attacks in three ways.

Now could the allegations be correct about him? Of course, or maybe of course not? We don’t know yet.

He has spoken of this incident in the past and said it was all BS.

If anyone was coerced into making false claims against Tate, I sure hope they are exposed, and the full weight of the system and legal fees are dropped on them.

Why do I mention any of this? Why not stay in my lane? Well, it’s up to us all to make sure we have a voice. Let me briefly explain.

People should be able to exercise their first amendment.

The government or social media companies shouldn’t be censoring or canceling us.

We The People should be in charge of canceling people, not big brother.

Meaning if I don’t like what you have to say, I can skip your post, block your account, or simply not be friends with you. I don’t want the “Matrix” to silence, ban or cancel you. I want you to be able to speak even if I don’t agree with you. Let the best idea win, so to speak.

As Voltaire said, “I disapprove of what you say, but I will defend to the death your right to say it”

Elon exposed how the “Matrix” censors, bans, and cancels opposing speech under the orders of big brother. This is not healthy.

Big brother, the Matrix, whatever you want to call it destroying businesses, lives, etc., of people who have a different perspective is truly one of the last signs you see before totalitarianism takes over.

We must stand together and ensure our voices are not silenced. While Tate may say some very controversial things, I will stand and say he has a right to say them, as should anyone, whether they agree with him or not. It should be up to us to tune him out, not the government.

If they can censor, cancel, and ban the most googled person on the planet, they surely can do it to you.

I just hope he gets a fair hearing with an ethical and moral judge-jury. Remember, while I may not agree with what he or you say, he and you should be able to say them.

Remember what Orwell said, “If liberty means anything at all, it means the right to tell people things they do not want to hear.”

Remember what Ben Franklin said, “Without Freedom of Thought, there can be no such Thing as Wisdom; and no such Thing as publick Liberty, without Freedom of Speech; which is the Right of every Man, as far as by it, he does not hurt or controul the Right of another: And this is the only Check it ought to suffer, and the only Bounds it ought to know”

I think we can all agree the government and media at all levels have failed us. We must not stay silent. We must not fear being called names or canceled. It’s now or never.

“I would rather die standing than live on my knees”

Look for part 2 of our CHRISTmas present to you very soon!