The Founders Warned US 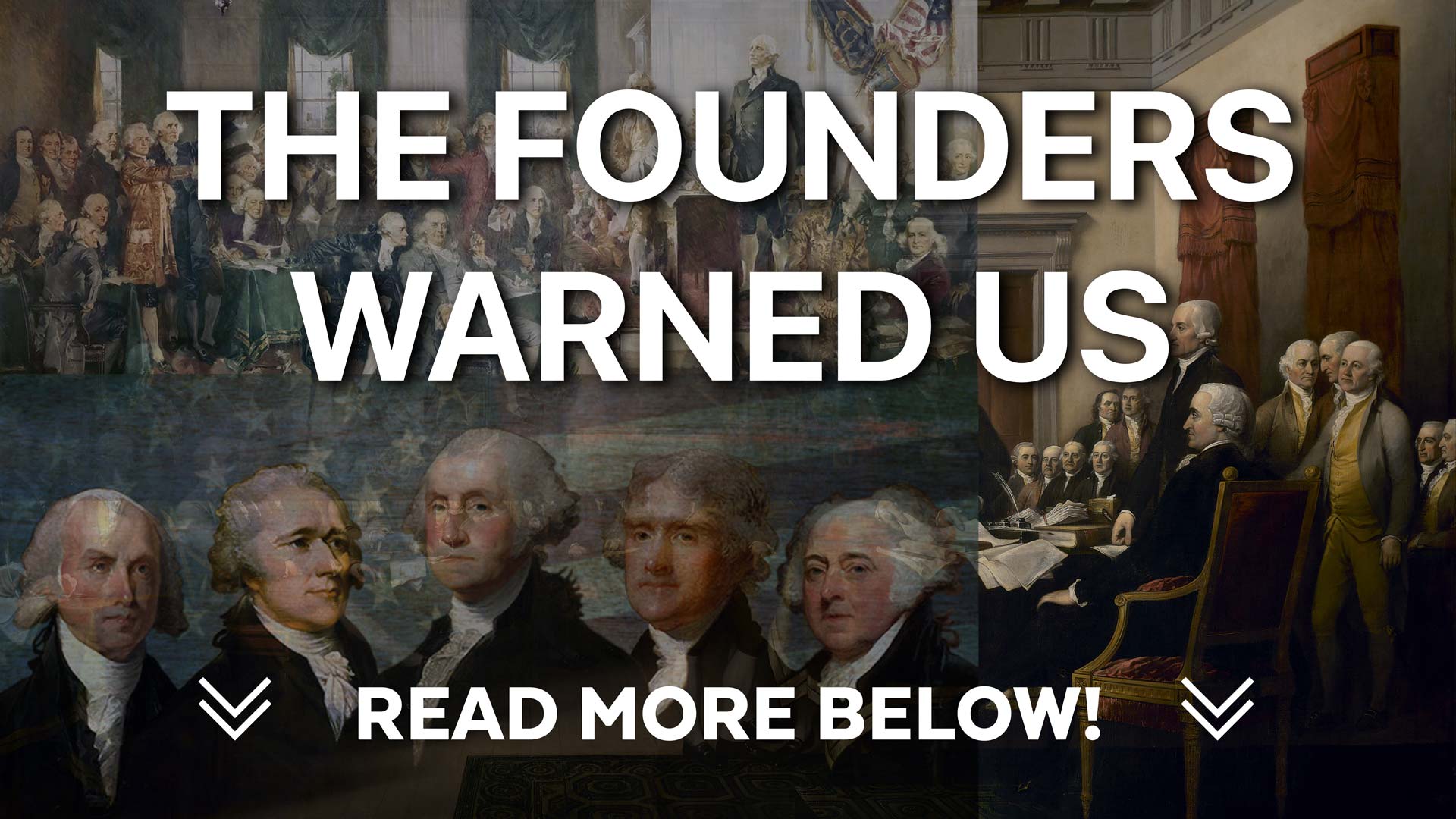 As I started to type this letter, it was to answer several emails that all asked me the same question.

What is the question?

They asked, “what happened to our country, and how can we save it?”

Now I was going to go into explaining how it’s all our fault this happened and explain why and how, but I thought it better and prophetic even if the founders and scholars of old explain it to us in their own words.

If you heed their warnings, you’ll see how we’ve lost our country and, again, how to save it.

Let’s start with my great uncle Ben Franklin, he said, “I agree to this Constitution … and I believe, further, that this is likely to be well administered for a course of years, and can only end in despotism, as other forms have done before it, when the people shall become so corrupted as to need despotic government, being incapable of any other.”

Meaning in short, no matter how great our constitution or country is, when our leaders become corrupt, our government will become completely tyrannical, a dictatorship at best.

John Adams said, “Our Constitution was made only for a moral and religious people. It is wholly inadequate to the government of any other.”

I think you get what he means. Basically, our constitution is worthless if evil or corrupt people are in charge.

Abraham Lincoln warned us, “At what point, then, is the approach of danger to be expected? I answer, if it ever reaches us, it must spring up among us. It cannot come from abroad. If destruction be our lot, we must ourselves be its author and finisher. As a nation of freemen, we must live through all time or die by suicide.”

Here Lincoln is telling us if America is to be destroyed, it would be from within not from abroad.

Alex De Tocqueville tells us, “The will of man is not shattered, but softened, bent, and guided — men are seldom forced by it to act, but they are constantly restrained from acting. Such a power does not destroy, but it prevents existence; it does not tyrannize, but it compresses, enervates, extinguishes, and stupefies a people, till [the] nation is reduced to be nothing better than a flock of timid and industrious animals, of which the government is the shepherd.”

In a nutshell, Tocqueville tells us over time, we’ll lose what makes us Americans, what our founding principles were, and eventually roll over and let government rule us completely.

While Ben Franklin may have been the great architect behind the constitution, two of my favorite founders are James Madison and Thomas Jefferson.

These two were looked upon by their peers as almost conspiracy theorists of their time. They laid out so many warnings of what would go wrong if We The People weren’t diligent in protecting our rights and freedoms.

“Mankind soon learn to make interested uses of every right and power which they possess, or may assume. The public money and public liberty, intended to have been deposited with three branches of magistracy, but found inadvertently to be in the hands of one only, will soon be discovered to be sources of wealth and dominion to those who hold them; distinguished too by this tempting circumstance, that they are the instrument, as well as the object of acquisition. With money we will get men, said Caesar, and with men we will get money. Nor should our assembly be deluded by the integrity of their own purposes, and conclude that these unlimited powers will never be abused, because themselves are not disposed to abuse them. They should look forward to a time, and that not a distant one, when corruption in this, as in the country from which we derive our origin, will have seized the heads of government, and be spread by them through the body of the people; when they will purchase the voices of the people, and make them pay the price. Human nature is the same on every side of the Atlantic, and will be alike influenced by the same causes. The time to guard against corruption and tyranny, is before they shall have gotten hold on us. It is better to keep the wolf out of the fold, than to trust to drawing his teeth and talons after he shall have entered”

“I think myself that we have more machinery of government than is necessary, too many parasites living on the labor of the industrious. Government big enough to supply everything you need is big enough to take everything you have … The course of history shows that as a government grows, liberty decreases. The two enemies of the people are criminals and government, so let us tie the second down with the chains of the constitution so the second will not become the legalized version of the first”

“When once a Republic is corrupted, there is no possibility of remedying any of the growing evils but by removing the corruption and restoring its lost principles; every other correction is either useless or a new evil”

“The end of democracy and the defeat of the American Revolution will occur when government falls into the hands of lending institutions and moneyed incorporations.”

“All tyranny needs to gain a foothold is for people of good conscience to remain silent.”

“If the American people ever allow private banks to control the issue of their currency, first by inflation, then by deflation, the banks and corporations that will grow up around them will deprive the people of all property until their children wake up homeless on the continent their Fathers conquered…. I believe that banking institutions are more dangerous to our liberties than standing armies…. The issuing power should be taken from the banks and restored to the people, to whom it properly belongs.”

“That whenever any form of government becomes destructive to these ends, it is the right of the people to alter or to abolish it, and to institute new government, laying its foundation on such principles and organizing its powers in such form, as to them shall seem most likely to effect their safety and happiness”

“Free men do not ask permission to bear arms”

“A well informed citizenry is the best defense against tyranny”

After reading some of Jefferson’s warnings and insights, it becomes very clear what he was warning us about, as did many of our founders. What did they warn us about? Exactly where we are right now in America. The very things that they said would destroy our constitutional republic have arrived and have taken hold.

They also tell us how to fix it. It’s up to God and We The People. We can’t have corrupt, evil people running our country. It will only end in evil and slavedom.

Moses warned us, “For I know thy rebellion, and thy stiff neck: behold, while I am yet alive with you this day, ye have been rebellious against the Lord; and how much more after my death?” (Deuteronomy 31:27)

He knew, too, that in time his warnings, teachings, and commands upon the Israelites would be forgotten, and the people would lose their prosperity.

Even the Arizona Constitution tells us, “A frequent recurrence to fundamental principles is essential to the security of individual rights and the perpetuity of free government.” ( Arizona State Constitution, Art. II, Sec. 1)

I could easily write a 5,000-page book on the warnings of old from so many incredible pillars of our founding, but hopefully, the above makes the point well enough for you.

So to wrap this letter up, we were warned this would happen if we didn’t stay involved. We were warned if we left what we must do for ourselves to others, we’d lose our rights and liberties.

We were warned that we must peacefully stay politically active and hold our leaders accountable.

We’ve seen that over the past century, we’ve become far less involved, and now evil has taken root at every level. It’s time we go back to our founding principles, use the constitution as it was intended, and remove all these evil people from office using the same documents our once great country was founded on.

All of this can be done peacefully if enough of us simply get involved.

Amendment IX states, “The enumeration in the Constitution, of certain rights, shall not be construed to deny or disparage others retained by the people”

How many laws, mandates, regulations, agencies, policies, etc, can you count that have been unconstitutionally imposed upon us that deny and or disparage our rights?

“The price of apathy towards public affairs is to be ruled by evil men.”