SOS for the SOS 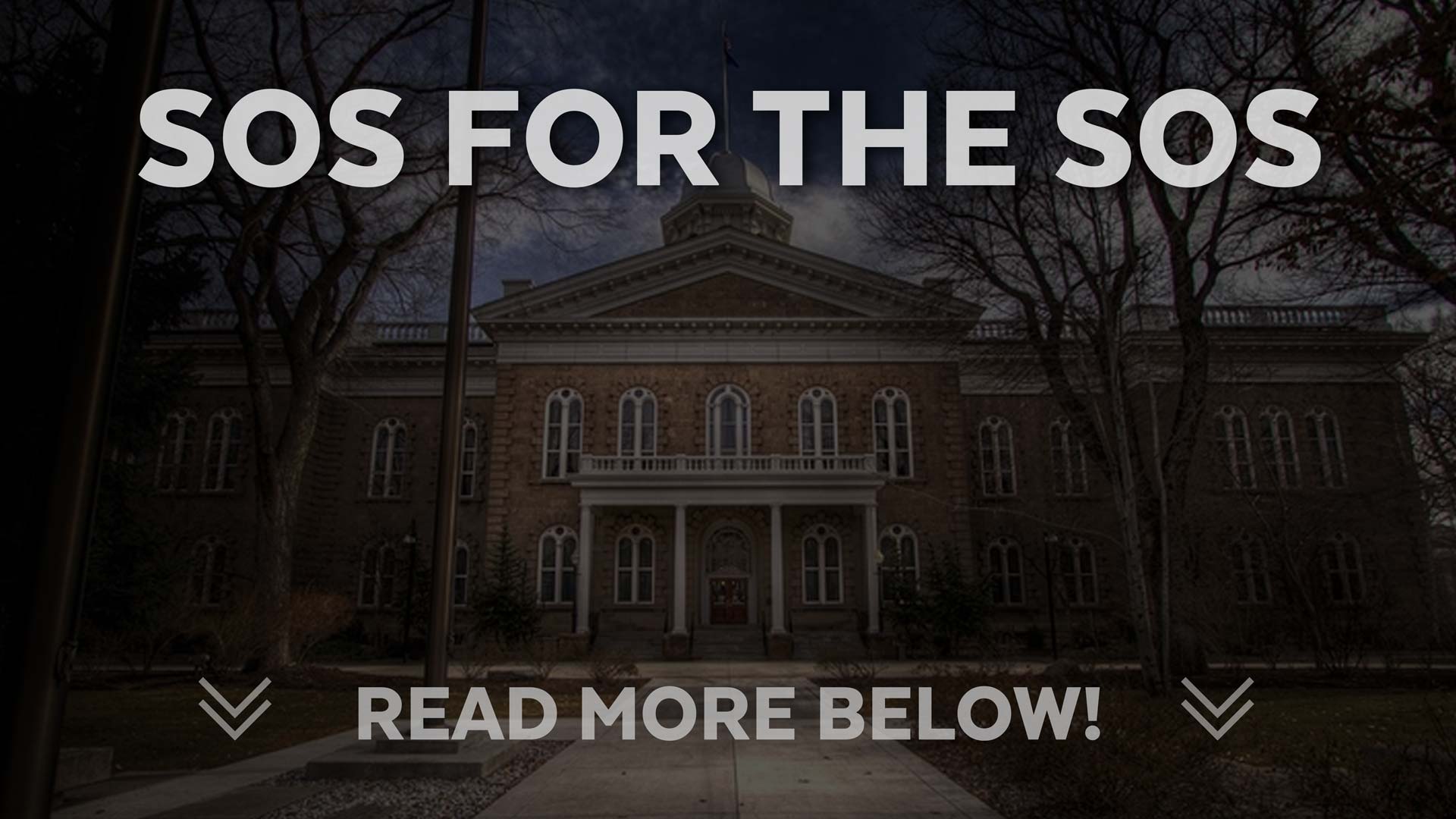 Signal of distress to the Secretary of State and office.

Many of us are scratching our heads, wondering if the SOS and office are incompetent or corrupt.

The Jews popularized this saying during the holocaust.

What we are seeing take form in our country is much like that of what the Nazis were doing.

Our elections, now selections, forced mandates-lockdowns, etc. these are three in-your-face examples. We could go on and on but let’s focus on our secretary of state for the purpose of this letter.

Our incredible team of volunteers and paid patriots (Patriot now considered a bad word, maybe “they” should look into the “Patriot” Act) observed hundreds to a thousand or more violations and issues in our 2022 primary. Nearly a thousand affidavits were sent directly to the secretary of state’s office.

We’ve seen dozens of these “do not amount to a Title 24 election law violation” letters sent to us. If you haven’t seen one, here are THREE for you. They look like this: 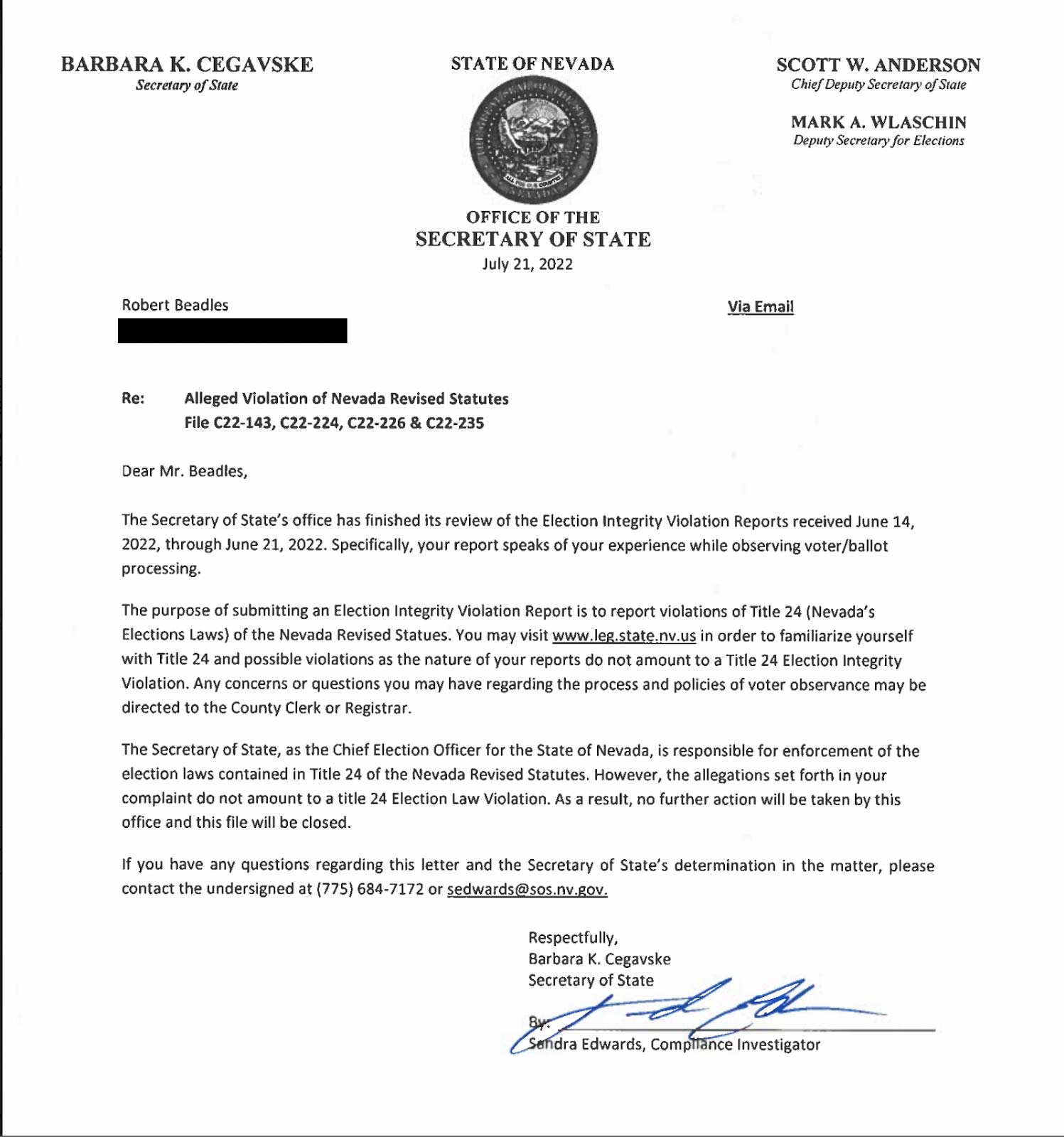 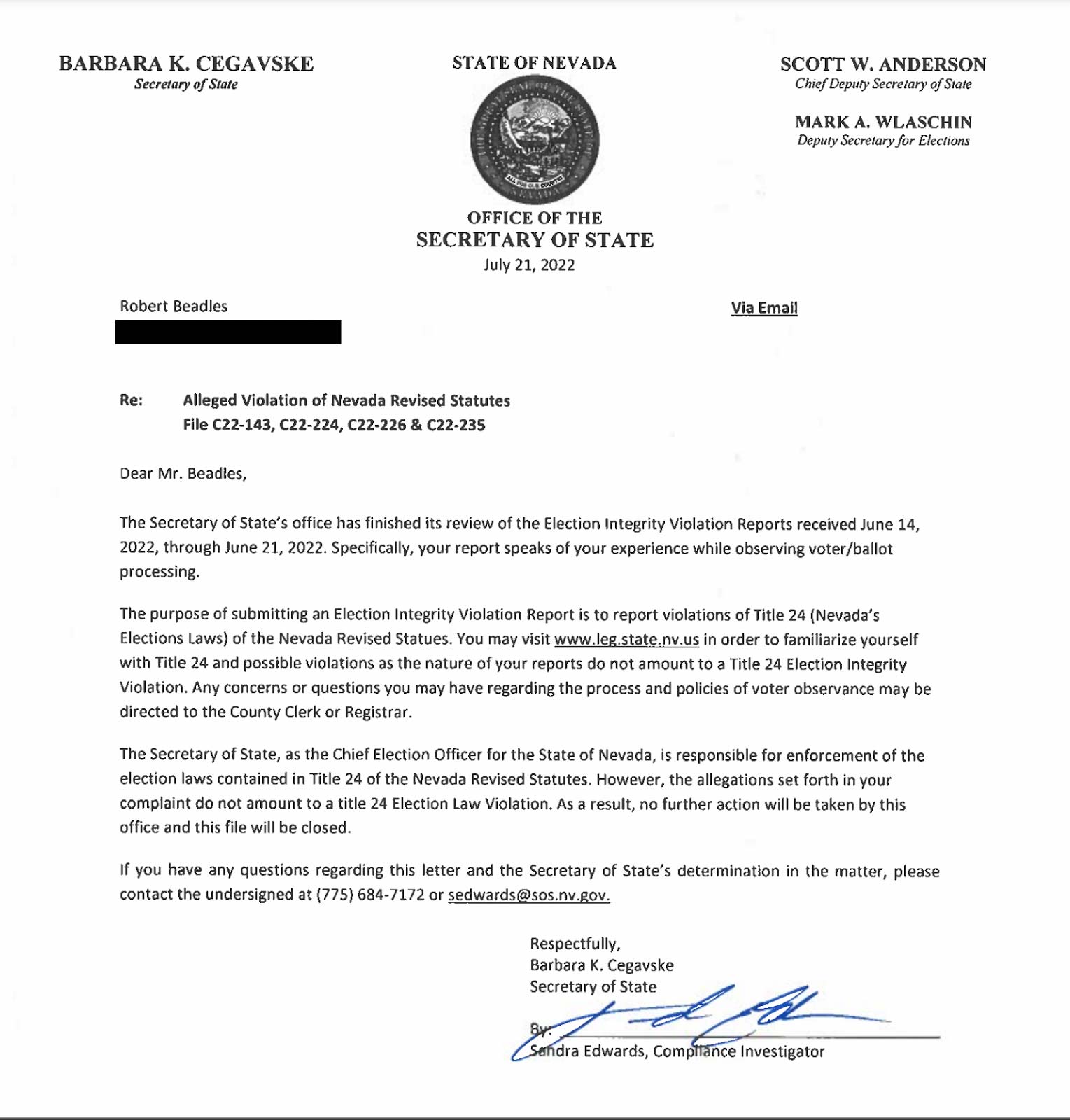 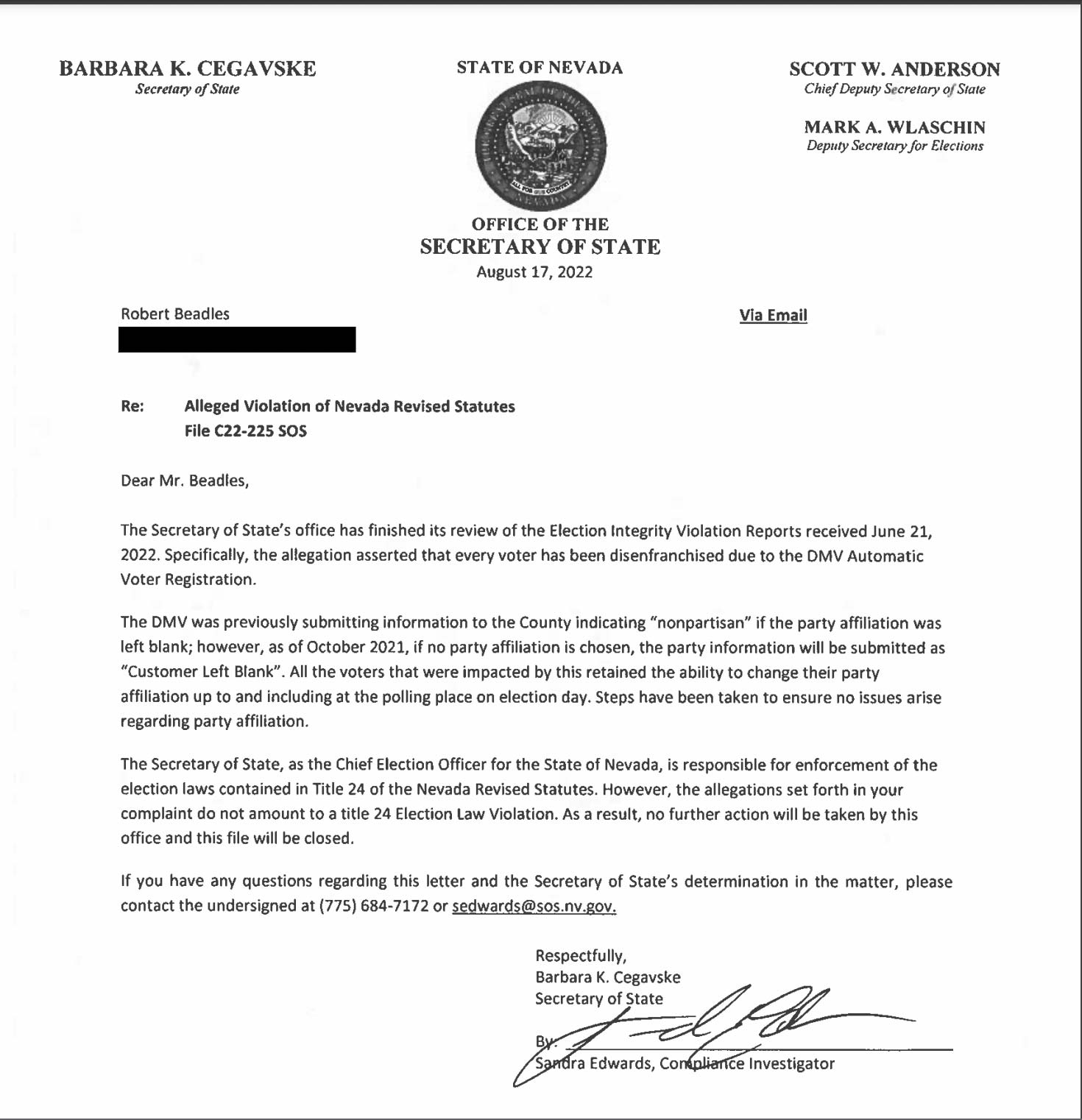 Boilerplate, vague, you email her back and ask for a response, and no response is returned.

Many of us are wondering, how in the hell can just in Washoe alone they have no registrar of voters, no one qualified to be running many of the polling locations or main office, and admit they are counting all of our votes in secret, not be a violation of Title 24?

Under Our Court Orders, we see: 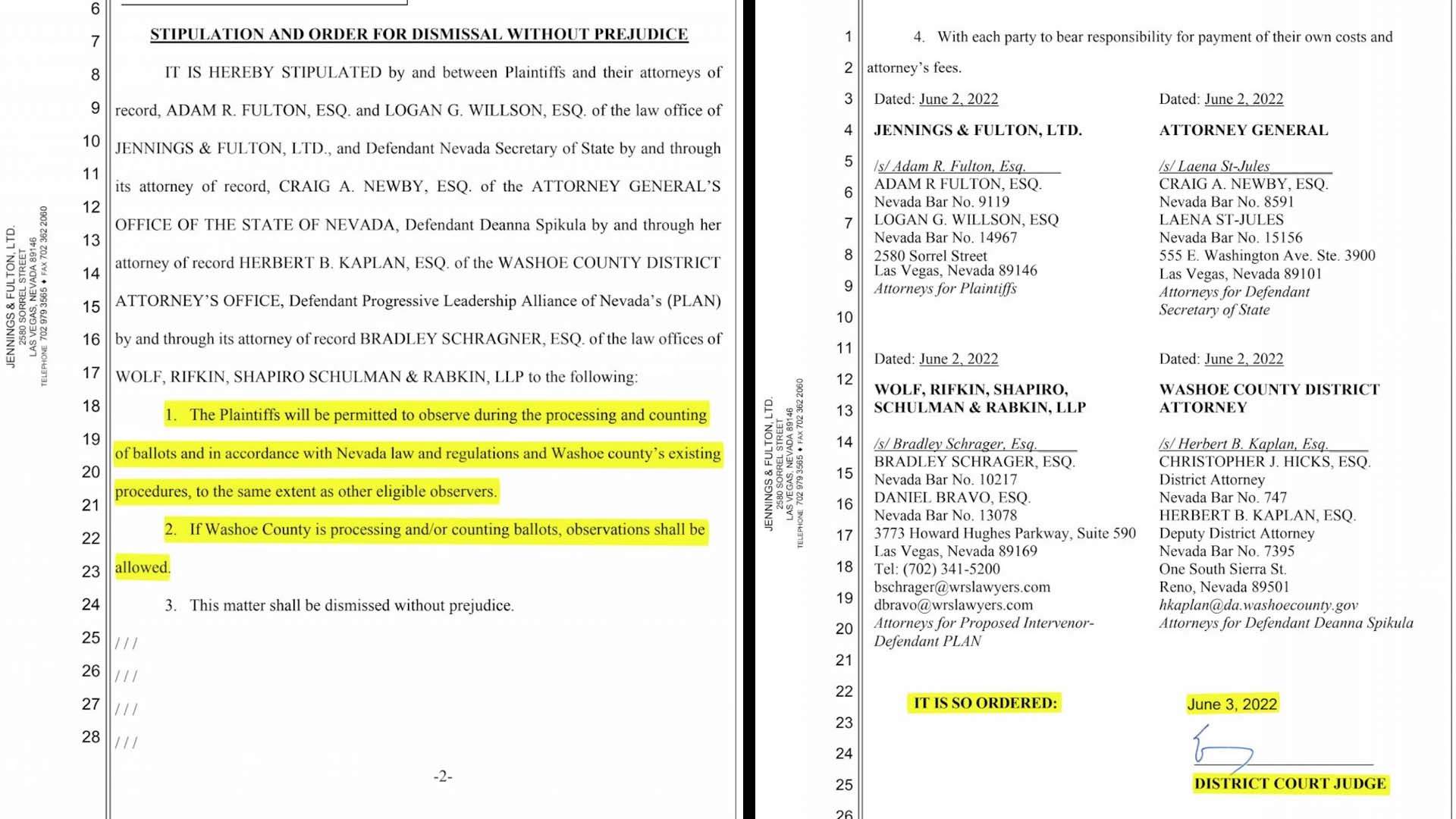 I could give dozens of examples, including things like destroying the secret ballot as per my affidavit here, but again they say that’s not a violation of Title 24. Yet, if you look in the NRSs, it sure looks like it violates 49.315 and several NRSs under title 24.

How are these complaints not violations?

We have some serious issues with our current election system and secretary of state. If these are not violations of Title 24, they have literally said our elections are now equal to that of a banana republic.

Our team even proved our primaries are using an algorithm to steal your and my vote, but even the judge said,

Every attorney I’ve talked to about the judge’s behavior in this case say it’s appalling, at best, criminal at worst.

The defense’s argument was that even if the elections were rigged, we had to show how rigged, and we were going to do their job for them and even show them HOW rigged they were on Friday, but that was denied, and the case was killed on Wednesday.

What will they do then?

Commit treason or do what’s constitutional, just, and expected by We The People?

We definitely have an SOS out for the SOS and for ALL of us to wake up and correct these Constitutional Republic killing actions or indications that are destroying our great nation.

83% of all Americans have worries about our election process. When issues like counting all our votes in secret are dismissed as not a problem, it’s clear to see they are perpetuating our banana republic election system.

Remember, Actions speak louder than words, especially inaction.
Staying quiet is still saying something. Doing nothing is still doing something.

History repeats itself; those who don’t learn from it are doomed to repeat it.

Is this why schools have stopped teaching true history, and the media refuses to cover the truth?

I’ll leave that to you to decide.

In the meantime, regardless of what the propaganda papers or so-called press says, we have a real problem. If we ever get our day in court, it will be proven.

In the meantime, with everything you’ve just seen here, don’t you think we’re owed real responses by the secretary of state and our so-called leaders as to why our elections no longer count legitimately?

Why should we trust them?

If they did, we’d have one-day voting, at a precinct level, ID required, and most all the issues would go away.

Precinct level, hand-counting is far faster, cheaper, and trustworthy. Why won’t they give their bosses what they want?

When will enough of us say enough?

Stay tuned, Gilbert will be off to the Supreme Court soon. It’s in God’s hands from here.