The Media Sold You Out 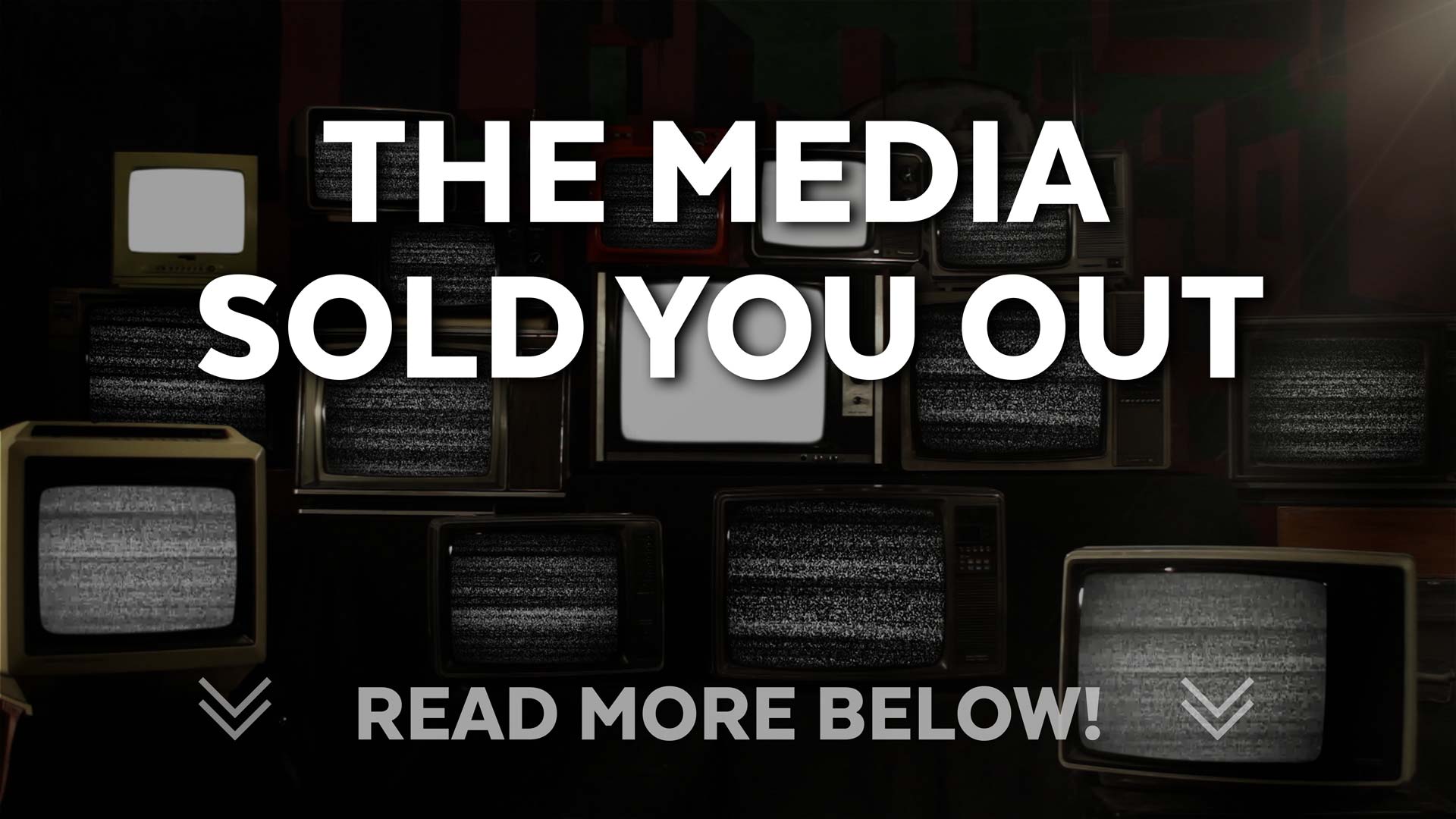 Growing up, we mostly thought what we saw on tv and heard from the news reporters was real, was the truth.

But as we got older, wiser, and questioned things a bit more, we quickly saw the discrepancies.

Now we won’t go down the bottomless rabbit hole of things like operation mockingbird or who really owns the media; instead, we’ll just focus on our own backyards.

We’ve seen channels like CNN+ come and go overnight, and we’ve seen shows like Joe Rogan’s Podcast, WarRoom with Bannon, etc., take off like a rocket.

It’s clear; people are tired of being programmed, lied to, and propagandized.

We see these local papers or online publishers beg for donations as their subscriber-ship plummets. Why? Well, truth be told, they suck.

They constantly tell us what to think. They switched from reporting unbiased news to putting a far left slant to almost everything reported, with most pieces now coming off as commie op-eds.

It’s bad when my attorneys, professionals, etc., tell me how they don’t read the papers because they’re so far left, slanted, wrong, or just plain untruthful.

People are wise to it.

Take, for instance, the recent hit pieces on Joey Gilbert. Not one of these publishers asked him for a comment about the gubernatorial contest status. Instead, these publications literally print or post narratives that are completely one-sided and based on close to zero facts.

They are literally slander pieces.

It’s fun watching these so-called writers write or report about Edward Solomon, attacking him, not his work.

They attack the messenger, not the message. None of these reporters are remotely smart enough to even hold a conversation with Solomon, let alone tell you his work isn’t correct or discount it.

It’s funny they attack him for installing swing sets on the weekends. Did anyone ask him why he does it?

Do these so-called reporters have issues against swing-set installers or manual laborer jobs?

Because they sit behind a keyboard typing about others, they somehow feel superior?

What have these so-called reporters ever done of significance? Seriously.

They want us to believe their narratives; what the hell have they ever done of significance?

They will attack Solomon and call him a self-proclaimed math genius. Well, of course, he is. Ask any Mathmatecian that reviews his work or speaks to him. He’s literally 1 in 8 billion brilliant. So because he doesn’t have a degree, that somehow makes him unqualified? Ben Franklin didn’t have a degree; they gave him an honorary one, though. Dell, Gates, Branson, etc., etc. have no degrees. Who the hell are these nobody writers that have accomplished ZERO in life to attack people like Gilbert and Solomon?

These people live in our communities and are begging for donations. These people aren’t fit to write recipes, let alone cover issues our world and society face. They won’t get a dime from me. Hell, if they just told the truth, they wouldn’t be looking for money; it would flood in.

I would trust you, the reader (except the people I’m talking about who read these) far more than these so-called journalists to report the news.

I’m not alone either; that’s why these people are losing readers, subscribers, etc. they suck, and they seem to always get it wrong.

Here’s a site with just a few examples:

I would mention the local people I’m referring to but don’t want to give them a word of acknowledgment as, in many cases, we reach far more here than they do on their pages.

There is one, though, one local Nevada online paper that I have found to be doing pretty solid work, the Nevada Globe.

If you read their articles, they come off as unbiased and informational. That’s what news should be!

So kudos to the NVGlobe. Hopefully, others will follow suit, but I wouldn’t count on it.

Credit should also be given to https://360newslasvegas.com, Mindy Robinson with The DC Patriot, Nevada Liberty.org, and Gateway Pundit. These sites, too, offer a much-needed reprieve from the mainstream garbage as well.

These other reporters seem quite content in publishing lies, propaganda, and skewed opinions. We should all unsubscribe from their online or paper memberships. Why reward these people?

In closing, we don’t trust the media, and we absolutely shouldn’t. Alternative news sources are growing exponentially. We see the censorship of truth and de-platforming of these news organizations from YouTube, Twitter, Facebook, etc., and you know why? Because they question the lies and give us a different perspective and information.

That’s what we need, and that’s what they are afraid of. That we will all wake to their B.S, tune out, and call them out completely.

What have these mainstream media companies been right about over the past four years? Next to nothing is the right answer.

Unplug, find alternative sources, Nevada, and check out the NVGlobe; they seem to be doing it right.

It’s going to be a wild next few weeks, and we’ll report the truth here, stay tuned.

Check out this quick 2-minute video you won’t see on the local news etc.