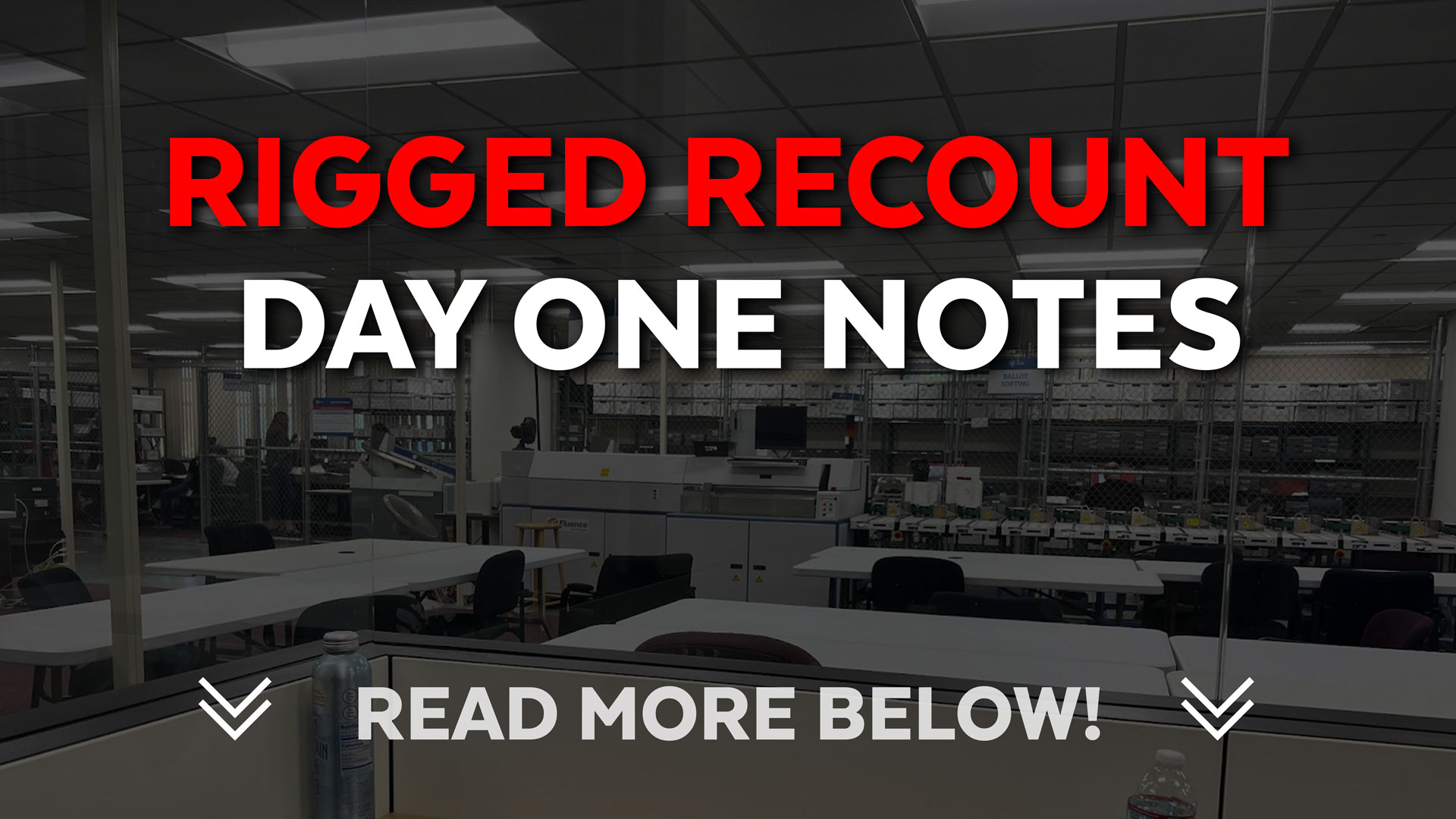 The morning started off around 6:18 am in Clark County, where the legal team was given 12 minutes notice that the recount starts at 6:30 am.

Obviously, the ROV in Clark told his staff to arrive at 6:30 am and start the process. Why didn’t he tell the team that just paid $191,000 and change for this rigged recount?

Observers got down there as quick as they could to find none of the boxes were sealed properly; ballots were being stuffed in as fast as they could to these corrupt machines to give us yet another corrupt result.

The ballots being shoved in, no observer could observe meaningfully, and the hand count that was requested was completely ignored.

The ballots observers could see had huge problems; we’ll discuss that in court. Let’s just say it’s beyond alarming.

In Washoe, the same was happening. Look at these pictures; can you see what they are doing?

This is meaningful observation?!?! 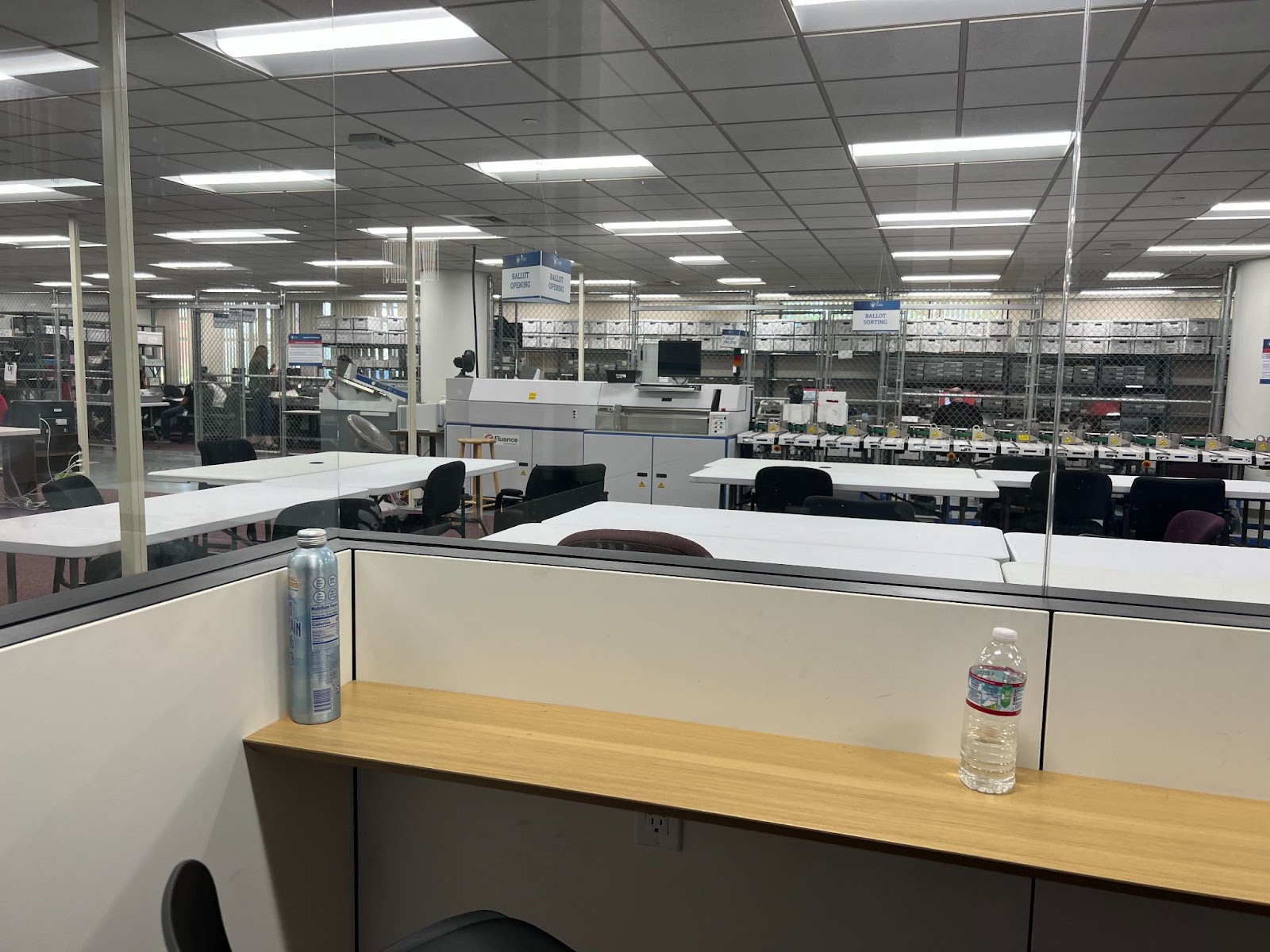 Yea, far from meaningful, but make no mistake, this is by design.

They hide behind their glass walls and 40-100 feet distances to keep observation a joke.

What did we see in NYE county, where an election machine tech WAS NOT present?

NYE is the County whose commissioners voted to remove the machines but the County clerk, who retires in 4 months, decided to keep them against the people’s and commissioner’s wishes.

She forgets who she’s supposed to be working for.

But the big question is, why didn’t the vote totals match?

Tomorrow the machine techs will be in there to fix the issue and say all is fine, we imagine?

Handcount would have been ideal as in science, you test theories in multiple ways and times before they become fact.

Here they keep us away from seeing what they are doing, ignore our hand count request, use the same broken system, and expect us to believe their broken results.

We knew they would do this, but it’s one of the steps in the political process we have to take to get in front of a judge to show the truth.

They expect you to sit down and shut up.

They charge ridiculous amounts of money for the recounts, per candidate.

What’s more laughable is they pull the same ballot and run it thru the same machine that could tell us all the votes for all 10 candidates in nearly the exact amount of time it takes for one candidate!

Again, they think we are stupid. We know they are corrupt! This ONE fact proves they want to disenfranchise every voter, candidate, and their civil liberties.

It’s laughable how stupid they think YOU-WE are, or that you’re too busy working 20 jobs to pay for your family to live due to failed-corrupt policies by selected politicians to notice how they steal your lives from you.

These people are corrupt at worst and incompetent at best. They must be held accountable.

We’re told they may finish the recount in a day in most counties; some did today in fact, counting all the ballots. The big two counties could finish in one to three days, so why in the hell do they need 6 weeks for elections?

My opinion is it gives them time to stuff the boxes and make sure everything matches up so they can report their broken numbers.

Next week, God willing, we’ll get in front of God-fearing, moral, constitution-upholding leaders to do the right thing, hear the 100% proof of incompetence at best, corruption at worst, and right the wrongs!

Say some extra prayers for these “servant” leaders to uphold their oath. What we will share is 100% proof Gilbert won, and our elections are complete and utter trash to be disposed of.

We then can install a very simple, transparent, and 99% trustworthy system we all can trust much more in.

Also, not a single envelope was inspected to our knowledge; that’s where the signature and voter information are, not a single one. The ballots have no identification as to the voter on them, so why can’t we have real observation of the ballots?

Again, they think you-we are stupid. Wake. Call them out.

God bless the 17 counties of incredible volunteers who stepped up for us all—We love ya!