Where is the Statement of Votes Cast? 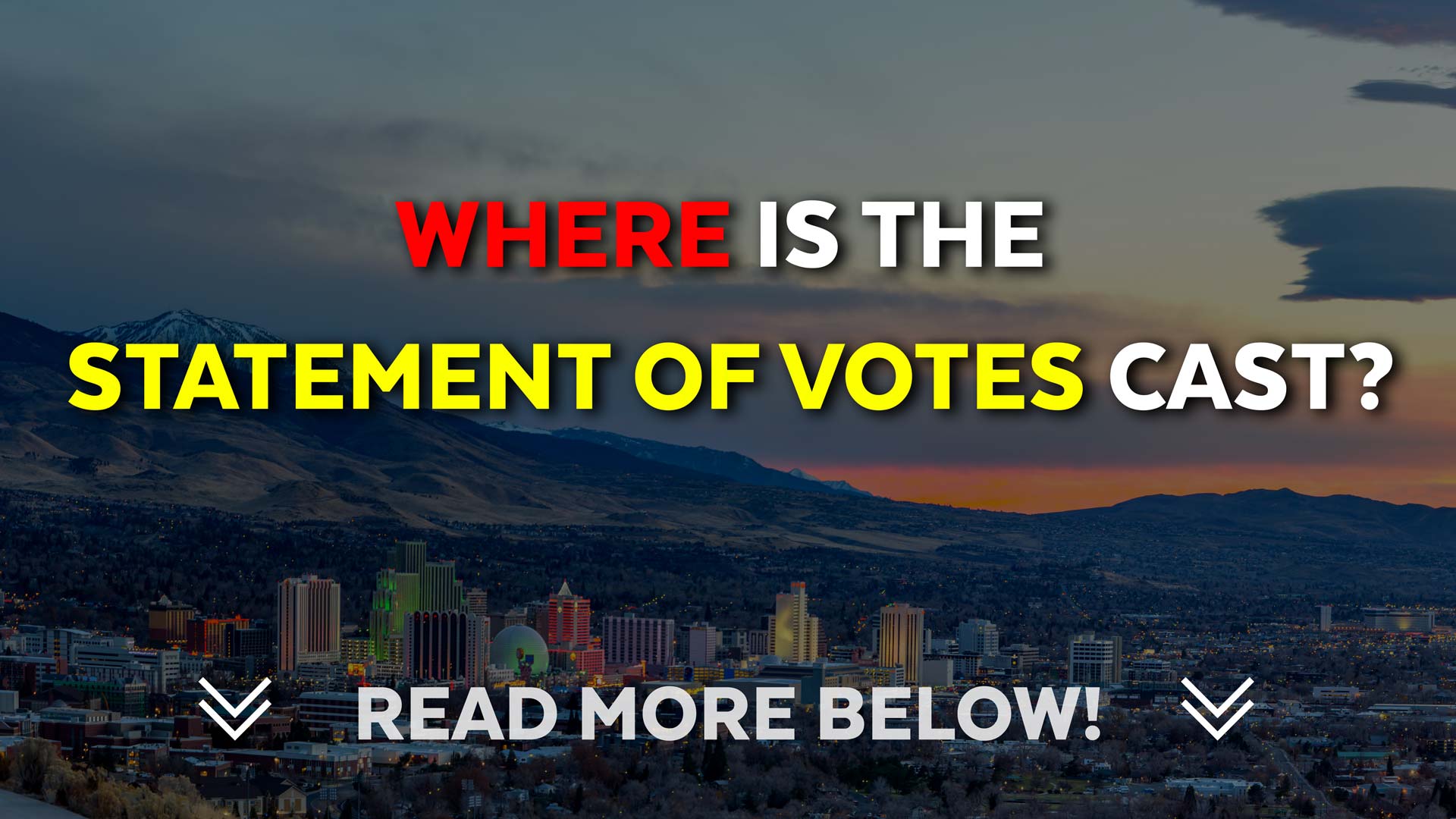 Well, Registrar of Voters (ROV) Deanna Spikula has officially resigned. To our knowledge, she hasn’t been seen since March 8th, so this is not a big surprise. Additionally, she stated she received death threats; however, none have been publically shown to our knowledge.

What we did see, though, was an incompetent person at best, constantly changing stories, positions, etc., that came off as very untruthful.

Her presentations were always dismal and constantly inconsistent with the facts. There are also several reports of her changing or deleting her comments after her presentation.

She won’t be missed by many.

Now County Manager Brown and the Board of County Commissioners have the chance to install a far greater ROV that the public has been asking for. We’ll have to see what they do there.

Now, onto what we now see with the ROV.

They just put forth one of the most incompetent or corrupt elections ever captured on video and by affidavit. Washoe didn’t even have an official ROV working the election. How is that even legal? We’re told it’s not, yet four of the county commissioners certified the election results.

Our attorneys state that makes them personally liable for certifying this disaster as all were made aware of the issues two days before the certification.

I’ve had hundreds of complaints come to me about the untrustworthiness of the ROV.

Here are some things EVERYONE SHOULD ASK and demand an answer to:

How can the ROV certify an election if they don’t have the data? Or know it was corrupt or incompetent?

How can we trust an election if we can’t see the data?

It’s as if I told you to make me the most amazing cake, and after you’re done, I’ll THEN give you the recipe!

Now to Clark County’s credit, which of course, is over four times larger than Washoe County, at least published their Statement of Votes Cast information, as you can see here.

Now, I personally am suing the ROV because they have violated the NRS statute several times in our requests for information. I literally have to sue them to get the information you and we need!

How many of you want to have to do that? Not many, I’d guess.
They also play a lot of weird games at the ROV, which makes it very difficult to trust them.

They have a woman named “Gwen,” whom Heather Carmen and Jamie Rodriguez are constantly referring to, who handles most of our information and data requests. Know what the problem is?

According to HR, there is no Gwen at the ROV—and after some detective work was done—it turns out Gwen is really Jenna.

This is the same woman who has sent me the wrong data 3-4 times now. But why the different name?

That’s not as strange, though, as to why won’t they furnish us the Statement of Votes Cast as Clark County does?

Why can’t they show us where and how people voted? It’s impossible to trust this election department when there is no transparency in this most simple of documents. How can we trust anything they say?

How can we trust them personally as well? Have you seen their top tech guy Michael? What is he doing here? I’m not a professional body language reader, but this appears to be highly questionable behavior.

They ran an election without a Registrar of Voters and had no chain of custody for a single ballot according to our witnesses, photos, and videos.

They certify an incompetent at best election and now won’t even display the Statement Of Votes Cast for the 2022 primary—but expect us to believe their results?

We have a banana republic election system in Washoe. It’s time they all go.

Also, check out this video. What the hell is this guy doing?

This is their head of tech. How many votes did he just inject or delete?

What the hell is going on here:

Our recount starts soon! The next letter here will break down what We The People say to these so-called election system servants of ours. We’re giving the middle finger to the whole election system. Stay Tuned!