Ok, let’s dig into some data for the people that say, “ok, you’ve piqued my interest, so now show me!”

We’ll start with Washoe Counties OWN DATA and a touch of the Secretary of State; this requires very little math, no formulas, algorithms, or equations. It’s very, very basic; after reading this, if you don’t seriously doubt the “Big Lie” propaganda and consider they are pushing the “Big Lie,” we will wonder if you learned CRT instead of math and critical thinking in school too, but I digress.

For the Washoe County 2020 Election

(Note, the numbers are different from our original report as we are simply using their own data here. The difference now comes from new data we received from the ROV on 3/2/22)

But more importantly, where are 29,779 registered voters?

ROV over reports the registered voters on November 2020.

ROV data suggests in November of 2020 they reported more registered voters than they had at that time.

With the other data we will show, this is enough to flip all State seats across Nevada but—more importantly—every County seat as well!

But we’re not done yet.

We procured from the Registrar of Voters on 3/2/22 a list of ALL
canceled and removed voters in Washoe County for the past 36 months.

This was to call their bluff; they say we didn’t take into account all the people who were inactive or who they removed from the rolls—meaning dead people, people who moved, etc.

Guess what we found?

Guess what their data also showed?

They added 100,920 new registered voters in the same period of time.

Guess what that means?

Now, Why is this a problem?

This is simple accounting, and this does not include inactive voters; these are active registered voters, and their math is off by 39,028 voters!

We believe in 2020, they were pushed so hard to overcome the red wave that they simply kept adding more and more votes to close the gap; the problem is they added more votes than voters!

Their numbers keep changing everywhere too; we could literally write you a large book on all the errors, abnormalities, manipulations, and fraud we’ve found.

The internal books simply do not match what they project to the world on their websites.

Their reportings seldom add up, their numbers keep changing, and we’ve been tracking it all since the election results came out. We also have decades of data to prove these shenanigans have been going on for a very long time.

Then we have all the dead people, people who moved away, vacant lots, hotels, motels, businesses, casinos, etc., with votes that are still baked into the bloated voter rolls; not to mention Edward Solomons’s algorithm that shows our votes are diluted by .63% across the state of Nevada!

We don’t even show you that here; this is just their own data! Open-shut case of potential fraud.

Just briefly as well, they have inactive voters too, not shown in these numbers; Michael Mulreany at the register of voters said in 15 minutes he could take large blocks of people and make them active.

So knowing that, as we’ve heard in other states, it could be seen here if there is a nefarious actor.

“They,” in theory, could take 60,000 or however many inactive voters, hit pause, flip them to active, vote them, flip them back to inactive, then with the bloated voter rolls, no one except the registrar of voters would be the wiser to it!

Didn’t we see a pause in 2020? Did pallets of ballets fall from the sky, digital votes change before our very eyes, and what would be a 1 in 4 quadrillion chance of happening mathematically happen in swing states across the country? Is that what happened here too?

Now you can see the numbers are sketchy at best; let’s look to some other sketchiness.

Here are a few examples of things that simply don’t add up.

Deanna Spikula says to the Nevada Secretary of State it was difficult to recruit election workers. 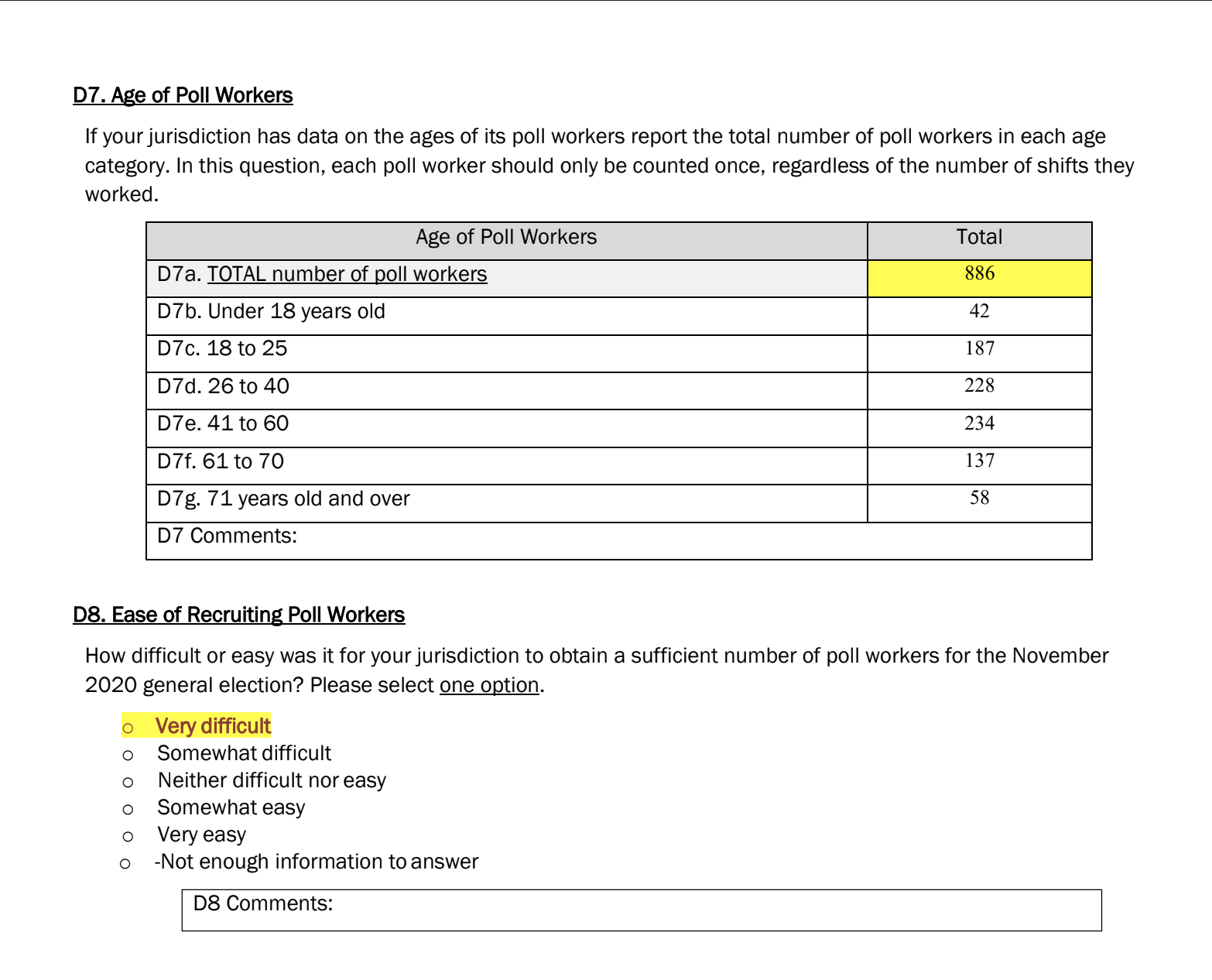 Here is a request for information her office tells us via email; they had over 2,000 applicants and only needed 800!

What the piss? Who are they lying to, the secretary of state or us?

They now have over 4,000 local applicants and again are outsourcing it. Why? Why not keep our elections local?

I’ll dive into these shenanigans and expose far more in another part of this Washoe wackiness.

Here is another example of numbers reported by the Washoe County Registrar of Voters in November 2020. Please again notice the vast discrepancy in votes. 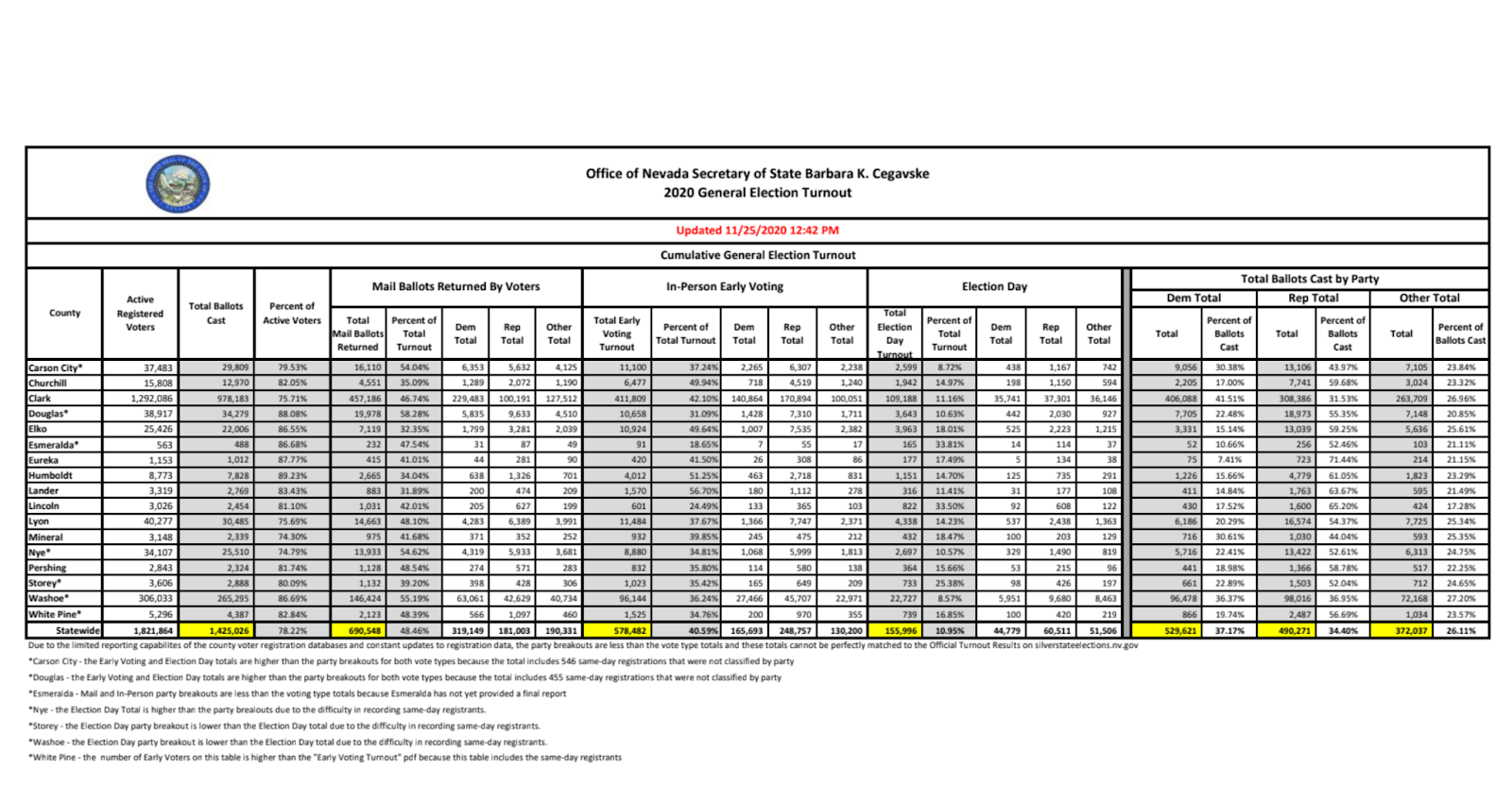 Notice on the 11/25/20 SOS report (now their website doesn’t show this BTW) when you add up all the votes for Washoe County, it comes to 266,662, then if you look at what they say ballots cast are, it shows them as 265,295? In the fine print, they mention something about same-day registrants being hard to track as to the difference? That’s a massive difference in a local race! It’s their job to track it all!

The SOS reports Washoe reporting 265,295 ballots cast, but below, Washoe on their site reports 252,563 ballots cast.

Again, that’s a 14,099 vote discrepancy with our most valuable voice, our votes!

Again, what the actual piss is going on here?

I can do this all day, but I just want to give you a taste of what is happening in Washoe County and how it disenfranchises the entire state and Country via electoral votes!

Could you imagine a publicly-traded company with books like this? Imagine being audited by the IRS and showing them numbers like that; what do you think would happen? Ask Capone if he were still alive.

To many, this is treason, as they have all been made aware of it and just lie to cover it up!

Supposedly 1-2 people have direct evidence that the very commissioners themselves are doing this! Not Herman, but they allege that Bob Lucey and Vaugh Hartung know or play a huge part in all this. We look forward to sharing what they have to say and supposedly have pre-primaries as well!

It’s a bit strange that this Bob Lucey guy, as an adult, changed his name from Lingenfelter to Lucey. The court documents, pissed-off partners, etc., will be shown here too. Don’t miss it.

Also, Vaughn Hartung was a wedding photographer who somehow became Chair Of the County Commissioners and has several sexual misconduct claims against him and much more.

The witnesses who allegedly have evidence on these guys are definitely piquing our interest. A womanizer and guy who changes his name before running for office, in charge of Washoe elections? More on that to come as well.

Now, this isn’t all; in part 3, we’ll dive into a critical recording of Washoe County Registrar of Voters, Deanna Spikula saying one thing in the public eye, then something damning to Washoe County legal voters when she is back in her lair.

Then, we’ll speak to ERIC, the structure of Washoe County elections, who “could” prosecute, and what the Secretary of State allegedly did to kneecap any chance of actual election policing, according to Adam Laxalt.